Life is complicated. The art of baking a soufflé is complicated. Yet, as any bride-to-be will tell you, seating arrangements are the most complicated of all because there is a vast number of unwritten rules to consider, starting with the fact Uncle Bob had a falling out with Cousin Joe, but unless they're both seated next to the band, they're likely to cause a scene. It can be quite a mess, yet immense satisfaction comes when, through strategy and savvy, you make everyone happy. That's especially true in Adult Swim and Popcannibal's quirky tile arranging puzzle game Girls Like Robots. 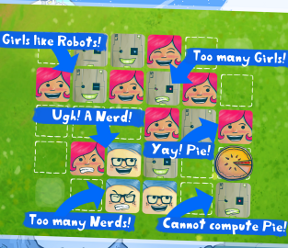 It's true, as you have guessed by the title, girls like robots. Nerds also like robots. But, girls do not like nerds (sorry, nerds). In fact, nerds don't like other nerds, either. As much as robots also love girls, they get very very stressed out if they're surrounded by girls. Then there is pie—everybody likes pie! Dishing up pie is a great way to serve up happy at a party. Except, well, robots don't have taste buds and don't understand pie. Whew! It's a lot to keep track of as you organize each particular tile on grids of various shapes and sizes, all with the goal of making everyone as happy as possible despite their finicky quirks.

Just as you perfect your seating chart logic, though, a brand new factor saunters onto the scene. Now you're trying to help Ben get a date to Homecoming, and send bugs to June (who just adores entomology), and, for reasons not known outside the Adult Swim/Popcannibal universe, milk cows with frustration. It's better to not ask why in these situations and to save your reasoning abilities for filling up the old euphoria meter. 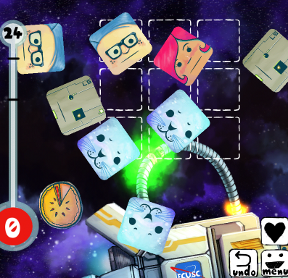 With all this variety and changeablity, this game is vast! Don't worry that, at over 100 levels, you'll grow tired of any particular puzzle scheme; Girls Like Robots has an eclectic mix of gameplay to keep it fresh. There are times when the next block isn't revealed until you've already placed the previous one or, later, times when you are given a limited number of switcheroos, have a time limit to get everyone contentedly settled or have to work against space blasts. There's even a boss battle-like ending to put all that tile arranging skill to a true test. Putting the ice cream on the pie, Girls Like Robots is tied together with humorous stories and eye pleasing graphics so your aesthetic sensibility is as satisfied as your cleverness.

Analysis: Built with the Unity game engine, Girls Like Robots looks and works beautifully on your mobile device. Every inch exudes quality production; the enjoyment and enthusiasm of the game designers shines through in the artwork, story, and inventive gameplay. The touch commands are easy to master, even as the rules of the game are continually remixed. Speaking of which, the changing rules are wonderful for those who long for variety and diversity in their puzzle games, yet may be disappointing to those who enjoy some strategies while disliking others. In such case, the use-at-any-time "skip" option, found off the menu screen, is a welcome feature. 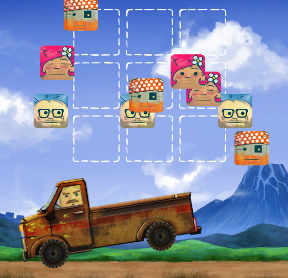 While it makes sense later in the game, when you reach a level that is all about undoing and rearranging, the lack of freedom to swap and switch tiles at any point in the process leads to frustration as much as it presents a logical challenge. Sometimes missteps aren't recognizable until you've laid several other tiles, making experimentation and restarting a necessary part of the process. Yet it's hard to not think this could be made more user friendly, perhaps if it had a tap and drag interface similar to Joining Hands. The Girls Like Robots' "make me happy" dilemmas could also be likened to Monsterz: Chainz of Friendz, an entry in Casual Gameplay Design Competition #9. What these games have in common is a rather uncommon form of puzzle that is both relaxing and mentally stimulating.

Girls Like Robots is its own game, though—it's too unique and full of personality to be easily compared to anything else. It has kitschy game design that's quite outside the box. That's reason alone to smile at and become absorbed in this cheerful puzzle which is sure to offer hours of play time as well as animated entertainment.

Thanks to Kimberly for the walkthrough!

Thanks to Kimberly for the walkthrough!

At least two of the photo links are broken.

Could use number order for ladybug levels (Both in Act 1 and Act 3).

I've checked the image links and they're working for me. Perhaps you can refresh your browser settings or use a different browser?

Which level numbers specifically do you need help with?

Currently I need help with:

Act 2: 1-4 is broken, I have tried to look at it through both Firefox and Chrome.

Here's a few that are broken(but I don't need help with them):

Oh, and another thing.

Have you considered posting your best layouts for the happy challenges?

We found most of the missing screenshots: 1-3-6 is still missing, but the rest should be viewable now. Thanks for pointing it out to us.

We're not going to revisit this walkthrough at this time, as we need to devote our attention to walkthroughs for newer, more popular games. If you have anything you'd like to share with us, though, we're happy to take a look!