Girl with a Heart of

Girl with a Heart of is a sidescrolling adventure game that plays like an interactive, art-filled story. Making choices during conversations serves as the meat of the game, and what information you bring out and discuss with characters not only shapes the knowledge you take away, but it also affects future conversations. The characters, storyline, and backstory are all richly detailed and create a provocative dystopian science fiction setting, one that you'll happily dive into with each and every scrap of conversation. 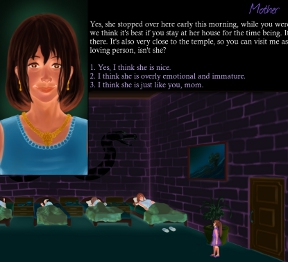 Girl with a Heart of takes place in Underfoot, a subterranean city built the Dark race of people who fled from the uninhabitable surface. As the eleven year old Raven, you were separated from your parents during an attack by the Light army, and now, as sickness spreads and renewed attacks are looming, Raven learns she has a unique ability that can help save her world from destruction.

Most of the gameplay in Girl with a Heart of revolves around text conversations, and the greatest decisions you'll make involve choosing which branches of the discussion to pursue. You can move left and right with the [A] and [D] keys, interact with things using [spacebar], and make choices using the number keys. Even though the world of Underfoot is filled with details, you only have to worry about moving right or left. When you can interact with something or talk to someone, a prompt appears at the top of the screen. How events play out and what options are available at any given moment is mostly linear, but the choices you make during conversations are anything but.

Raven slowly learns more about her world and her unique condition (which we won't discuss in this review, as it's so better to learn about it in the game) by talking with various people in Underfoot. She can ask questions, pursue various topics, and visit different levels of the city to get things done. Pressing the [C] key brings up Raven's status menu that allows you to manage a few stats and take a look at any items she has in her possession. Using skill points, you can increase Raven's ability to ferret out information from people or help her lie more effectively, two attributes that open up new conversation possibilities in the game. And, later, you'll deal with magic and some combat, but again, it's best to save that for the game! 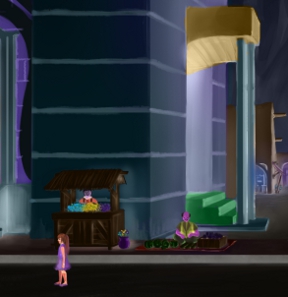 Analysis: It's always surprising to uncover a well-written story inhabiting a game like Girl with a Heart of. With so many projects nowadays focusing on technical prowess, it's easy to ignore the fact that one way to engage gamers is to provide a smart, intriguing story with little more than tightly-woven text conversations. While you don't need fancy visuals to accomplish that, Girl with a Heart of enhances its story with exceptional art direction. The world of Underfoot comes alive with detailed illustrations that loom in the background, prompting you to ask questions that have no answers. At least, no answers you've discovered yet...

One aspect that's mildly awkward is the integration of text and the game's visual world. Strolling along the streets and talking with people works just fine, but with the indicator that shows when you can interact with things at the top corner of the screen, you'll spend more time staring at the black bar above than the scenery. Flicking your eyes back and forth becomes a habit, but it seems that moving the text to the bottom of the screen, where Raven's actions take place, would be more conducive to comfortable gameplay.

Girl with a Heart of is a deep, detailed interactive story laced with adventure and RPG elements. The gameplay is minimal, but the intricacies of the world you're involved with will capture you from the very beginning. Raven's growth and development as you play ensures you'll stay enchanted through the very end. Not only that, you'll get to finish the sentence that begins "Girl with a Heart of...".

Interesting game that despite a few quibbles I've been enjoying reading over the vacation. Playing on my iPad though I haven't been able to figure out how to follow one of the instructions near the end. I get the message:

Your Heart of Darkness is not attached to any skill. Go to Character Menu to attach it.

However, it is frustrating unclear how I'm supposed to do this in the Character Menu. Can anyone help me with this? Thanks.

Pressing C is how you bring up the menu in the PC version, and from there you just click on the crystals. I'm not sure about the iPad, though.

In order to use the Heart of Darkness, at least in the PC version, you select the icon next to the skill that you want to use it on.

For example, if you wanted to use your Heart of Darkness to augment your Insight skill, you select the picture of the eye next to it, and the image will become superimposed with a black heart. That's how you can tell that it worked.

Has anyone gotten a "good" ending? I've tried 3 times and all the endings suck.

any suggestions on how to

beat Gaea at the end?

Hi, I think this game looks so amazing! I really want to download it for my HTC phone, but Google play do not sell it there any more:( And there is no other site that has it for download ether:( I think you should make your own download link availbility also. Is there a way you can help me put this classic game on my phone!!! ? That would be very Awsome! Thanks. My email [email protected]

@ifriqhua.awakening: Unfortunately, it looks like the developer isn't offering a mobile version of the game anymore. :-( We couldn't provide download links because now they don't exist. Sorry about that!