Hassan Mottaghi Golshan, Arman Balali Moghadam, and Ismael Chitgar are behind the gorgeous puzzle platformer that is Gilmo: The Inner Self, the story of a spirit who gets chained within an earthly body and must find out a way to get back where he belongs. Use [WASD] or the [arrow] keys to move and jump, holding [C] when nearby certain objects to push and pull them. In his earthly body, Gilmo isn't capable of much, and can frequently be stymied by long falls, gaps, or other obstacles. Fortunately, by coming into contact with certain plants, he can temporarily free his soul to take possession of nearby objects to make a path. That's... probably not a metaphor for anything. 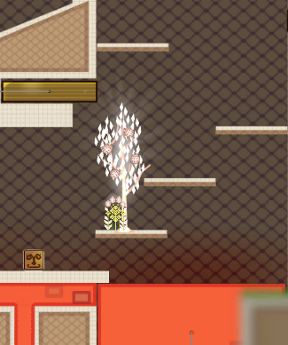 Initially, you'll be unable to manually shift to your ethereal form, but eventually you'll gain the ability to change at will by hitting left [shift]. In your spirit body, you can fly freely around each level (only with the [arrow] keys0, and pressing left [shift] while close to bronze coloured objects will allow you to control them as you please, before releasing your soul with left [shift] again and returning to your body in the same way. The white bar in the upper-right corner represents how long you can stay in spirit form, and if it runs out, you'll be kicked back to your body, and it will only refill back to a certain point. Remember to hit [P] to pause the game if you need to take a break, since Gilmo's health will (very) slowly deplete as you play, and must be kept filled by scarfing down the fruits on trees.

The Inner Self is, firstly, a GORGEOUS game with soft, appropriately ethereal visuals and a haunting soundtrack. The level of professional polish in its design and distinctive look is impressive. At the same time, however, the game might be both too strict and complicated in its mechanics... lose the decaying health and the restriction on your spirit form bar recovery and suddenly the game would have been a lot friendlier, a lot more casually enjoyable. It would also help if the movement were more precise and less dreamy, physics-y floating, which makes precise platforming in some areas more difficult than it needed to be. It's a shame since despite an uneven difficulty progression, Gilmo: The Inner Self is a beautiful game with a great concept and some flaws dragging it down to earth. If you have the patience for it and a steady hand, it's well worth checking out and admiring. Just... don't expect it to be as forgiving as you.

Play Gilmo: The Inner Self

It took me way too long to figure out how to control the ghost. I guess I should have read the review more carefully, but it seems like an oversight that wasd doesn't work there. I can't see why that would be deliberate. That and the sloppy physics made this a very frustrating experience, but it is gorgeous and the music is nice too.

Weird. My guy froze up, plus the inner self went from half power to no power. No controls. He's now sitting there losing his heart energy (well, then Flash crashed.) Pretty deep into the second level. I'm pretty sure that wasn't intentional, it seemed like a bug. FF/WinXP.

I've gotten all 10 of the white blocks, but the last level still only has 9 white blocks filled in. It was keeping synch up until the last two, in levels 8 and 9. I didn't check in between those levels.

The first level in Stage 8 is broken for me. The box you are supposed to use to push yourself through the gap instantly glitches out of the bottom of the level. This is on a Mac with the latest version of Flash on Chrome and Firefox. :(

Hey Bill, check out stage 5, top on those big trees. definitely getting 10 boxes in levels would obtain 10 boxes in stage 10.

Hello Shudog, sorry to hear you experiencing bugs! The game has been tested on winXP and win7 and should work fine. Flashplaye 11 or higher is required, Please upgrade your flashplayer to latest version and give it another try...

Hi Riiick, could you please explain more about the problem? does the little box falls down the floor (as you can't see it anymore) instantly as you start the stage 8? what if you restart the level (by pressing R)?

Sorry dude. This occurred on Flash 11.8. It walked like a bug, because all the other game elements didn't freeze -- just the controls of my guy.

@ll24llll: I already had that one, but thanks for the post. I was typing up a response to you that listed all the ones I'd found, to prove I got all 10, and then noticed I could only list 9.

Stage 2, in an underground tunnel
Stage 4, up where I can only get if I do the previous area very quickly
Stage 4, in plain sight at the end
Stage 5, off the top of the screen, in the tree
Stage 5, in the water
Stage 7, above the rising lava
Stage 7, on the lower path, after the elevator
Stage 8, half hidden in a bush
Stage 9, in plain sight after the lava block

So, it looks like I need one more in Stage 7. I hope it doesn't require jumping from that swing to the top of the three platforms. I tried that a bunch of times with no success.

em... if something like mochibot (some lines of code that gives the sponsor info about number of plays and so on) or some additional code crashes while running the game, the controls will freeze. do you have the same problem every time you try it? the game works fine in winXP and 7...

Hey Bill, unfortunately you need to do that:D
first shift the inner self to the box, she jumps higher!
That's the hardest luminous box to get, I admit!

Me the same as Riiick. Stage 8 is broken.

I am using Linux, with Firefox Flash 11.2

@ll24llll: If I restart the stage by pushing 'R' the box immediately glitches out of the bottom of the floor again (and off the screen).