Inspired by a retro game? Check! Precision platforming tactics? Check! Melt-your-eyes gorgeous visuals? That's a check! It looks like we have another heavy-hitting indie game on our hands! Giana Sisters: Twisted Dreams began life as a spiritual sequel to the original Commodore 64 platform game The Great Giana Sisters. What emerged from that Kickstarter project is something cleverly old school, supremely challenging, and more gorgeous than still images could possibly convey. You're going to have a great time yelling at the screen because you died at the same place for the 18th time in a row! 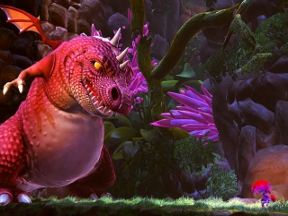 Giana Sisters: Twisted Dreams begins with a mysterious crystal visiting the so-named sisters in the middle of the night, transporting both of them to a world of dreams. A giant dragon gulps Maria down and holds her prisoner, so her sister Giana sets out to rescue her. As is the case with all teenagers, her life is a co-existence of opposing extremes. As is not usually the case with teenagers, you can switch between these worlds with the press of a button, morphing between Cute and Punk personas while the landscape transforms before your eyes. Obstacles disappear, enemies change, platforms reverse direction, and many other environmental details shift around, making this switch as functional as it is fun to watch.

Standard platform controls will get you through much of Twisted Dreams, and the goal is to make it to the end of the stage while collecting as many gems as you can get your hands on. Each of Giana's personalities comes with her own special move to use as well. Cute Giana has a twirl ability that lets her gain some extra air time by floating in a small arc. Punk Giana can transform into a fireball, crunching enemies, breaking blocks, and bouncing off of walls to get you through tough areas. These abilities can be used no matter which world you're in, meaning you'll often have to swap back and forth just to push through certain parts of the stage. 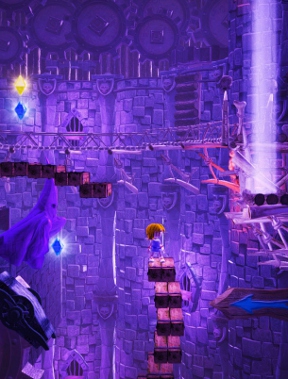 Analysis: Let's talk extras, shall we? Giana Sisters: Twisted Dreams comes with a beefy enough main game, but unlockable with just a little effort are Time Attack and Score Attack modes, allowing you to play through stages with either speed or points as your main focus. After that, it's time to enjoy Hardcore mode, putting you through the main levels without a single checkpoint to save your bacon. Get through that and there's über hardcore mode, which forces you to start over at level one if you're clumsy enough to die. When we said this game was difficult, we meant it!

Extreme challenge is a strong focus of this punishing game, and you have to learn to master the subtle nuances of control in order to traverse these stages. Messing up usually means instant death, and while checkpoints are generously scattered around, you always lose a little bit of progress, just enough to incite a miniature rage fit. Hang in there, do some deep breathing, and keep plugging away. Eventually you'll make it on top of that platform. I promise!

It calls forth the ancient and respected platform game of old, but it presents itself with a decidedly modern veneer. Giana Sisters: Twisted Dreams is the stuff of an action gamer's, well, dreams, and if the (not unfairly) challenging gameplay doesn't get you hooked, those beautifully morphing background visuals will! Oh, and the soundtrack? Yep, that's Chris Huelsbeck and Machinae Supremacy. And yes, it absolutely rocks!