Ghost in the Sheet

Ghost in the Sheet is an unusual point-and-click adventure game for Windows that drops the conventions of item management in favor of supernatural abilities. There is no inventory, as you don't pick up and carry objects in this game. Instead you gain a battery of ghostly powers that allow you to interact with the environment just like a flesh-and-blood human. It's a refreshing take on the adventure genre with a good sense of humor, unique puzzles, and a captivating game world. 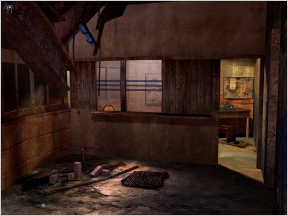 As the titular ghost in the sheet, you play a man who was hit by a bus and finds himself in a sort of limbo, held together by nothing more than a sheet draped over his being. A ghost catching organization immediately recruits him to investigate why the souls of deceased mortals on Earth aren't reaching the afterlife. Your quest begins in an abandoned factory where you'll learn the ropes of adventuring without a solid form.

Because of your ghostly status, carrying items, pushing objects and interacting with the environment is pretty much impossible. Fortunately you learn supernatural abilities that take their place. You start with Telekinesis that allows you to move objects around a room. As you explore you'll learn how to push/pull things, light darkened rooms, and much, much more. Most of the puzzles in the game take full advantage of your ghostly limitations and are centered around using supernatural abilities in creative ways.

Analysis: Ghost in the Sheet bends the adventuring conventions at the source with the lack of inventory and direct item manipulation. This adds a great puzzle flavor to what would normally be simple tasks. For example, if you need to get an object from one room to another, most games would let you pick it up and start walking. As a ghost, however, that's no simple matter, forcing you to get creative and watch your environments very closely. Also, this is one of those adventure games where jotting down notes isn't a bad idea, so have a pen and paper ready.

It seems like every casual game has to have minigames these days, and Ghost in the Sheet follows suit with a few of its own. Some of them are rather crude and disgusting, whereas the rest are simply forgettable. They're all easily skipped by tapping the [backspace] key, which is a feature many more casual game developers should take note of.

The atmosphere in Ghost in the Sheet is perfectly suited for the story at hand, and locations are well-drawn and pull you right in. The voice acting is entertaining (though sometimes a bit stiff), and you really appreciate the main character's sense of humor about his odd situation, reflected in some of his off-beat comments.

Ghost in the Sheet gets everything right as an adventure game and it manages to lose some of the dryness associated with the genre. The new take on an old theme works wonders. Unfortunately our affiliate doesn't offer a demo for Ghost in the Sheet due to its rather large file size, but if this review grabbed your interest, you won't be disappointed with the full version.

Hmm. I've yet to try the game, but the concept reminds me of Delightful Wallpaper by Andrew Plotkin. A few of his games were reviewed here already (Shade the most known, probably) although they're text adventures.

This reminds me exactly of a flash game, where you play a ghost who can't remember how he died, but, using his supernatural powers, he helps other ghosts pass on to the afterlife, which helps him remember his own life.

Hmm, The name seems to be a play on the classic "Ghost in the Shell" series.

Mike, I think you are thinking of the dead case, which I can't find a review on jig for.

Hm .. my last post didn't appear here. So I try again:
The name of this game is originally S.C.A.R.E. Have a look here: http://www.looki.de/info/scare (sorry, german)
Nice adventure, but not the best. Horrible in-game videos ;)

I want to try this out, But not badly enough to buy the game..

Not providing a demo for a point and click style game seems like a poor decision. People are reluctant to plunk down for a casual game without knowing what they are getting into.

With so many high quality free games around these days, the decision to create a commercial game and not provide a try-before-buy option is an extremely risky move. Especially when the screenshots look dreadfully simmilar to those godawful AutoCAD backgrounds used in recent hastily-put-together hidden-object games.

Too bad. Perhaps it IS a nice little game, I'll never know.

I played the demo (there actually is one), it's a good game, but sometimes it's hard to know what to do next.

I got ahold of the demo as well. Seems like standard adventure fare. Worth checking out if you're a fan of the genre.

To the people who don't think this game is worth it or don't know what it's about. This game is one of a kind unless they make a sequel. But anyways this game has some really cool things and just a couple of bad things. And as people have said earlier there is a demo, I already bought it so it's too late for me to try but I don't care, because I got immersed in this game for several hours and it was quite an experience. In fact it would have taken me a much longer time to finish this game if I didn't have help from a very good walkthrough. This game has a very entertaining storyline and has choose-able dialogue which helps to spice things help a bit. In my opinion has quite good graphics even though you can tell that they try to avoid animation (3-d's hard you know). It's also one of those games where you know it's not going to scare you but still has a couple gross things besides of the use of one curse word it's not to bad except the severed head guy, but if you buy the game you'll find out about that. Plus since this is from Big Fish they have game club which decreases the price as long has you buy another game later on the 2 for $20 is a good deal. In the end I think you should buy this pretty awesome game.
Hope to see you in the comments
Adam

Oh and I was wondering, does anyone know how to delete that annoying overwrite function. Thanks

Where can I get a walkthrough for this game?

Where is the demo?

Ugh. I was intrigued enough by the description to buy the game - sooo not worth it! :(
The cutscenes are too long and the dialogue is kind of dumb. The story is interesting, but they play it poorly. I needed the walkthrough to get anywhere because there's several cases of illogical pixel hunts - nothing visually suggests that you should scour a particular portion of the screen for a sliver of information or a hiding place for items, and yet that's what you have to do. Viewpoints and navigation don't always make sense (you climb up a ladder and suddenly you're looking at where you supposedly are from across a distance.. but you can turn and stroll down a hallway from where you apparently are, anyway). Progression through the dialogue options was fairly sensible (even if the actual content wasn't as witty as it thought it was) and forgiving, letting you try another tack with uncooperative interviewees, but a handful of cases where you had to find something and go back to a character were hampered by the difficulty of figuring out where (and what) the prompts for further conversation were. The "good guys" in the story were almost as disappointing (and random) as the bad guys, and I still don't know who my character was supposed to be, before his death. I really liked the idea and the basic game-play premise, but the execution wasn't worth the cost, in my opinion. :/=

I was sure that i played the game mike is referring to via a link on jayisgames many years ago, but it appears that no review for the game exists in the archives... ?