If you haven't played the original Ghost Hacker, then you're probably not going to have much of a clue of what's going on in Core Sector's Ghost Hacker 2, but if you're a tower defense fan, then it's very much worth your while to find out. Place towers and power them up with nodes to defend your cache of data cores from incoming hostiles in each level. Or, if playing in Monster Mode, swarm a devious layout of towers and traps yourself by deploying enough minions to capture all the cores yourself. Feeling puny? Then replay stages on harder difficulties to earn more cores to permanently upgrade your structures and abilities, or try a level again with an entirely different layout of towers and powers. 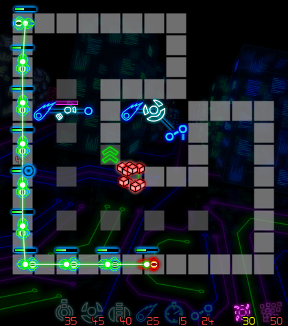 Considering the original Ghost Hacker came out almost three years ago, it's sort of surprising that its sequel doesn't offer any sort of synopsis to bring you up to date on who everyone is and what's going on. Even if you've played the first game, three years is a long time, and I can't even remember what I had for breakfast today. While not significantly different from the original, however, Ghost Hackers 2 engages with its strategic gameplay, replayability, and sleek cyberriffic visual style. Just stand on your chair and loudly proclaim "I FIGHT FOR THE USERS" and then sit back down and play some more.

Jay. I think something is wrong with my browser. I tried to rate 4 and somehow I gave a large negative number. After some error messages.

Try emptying your browser cache and reload the page.

I may have played the old one a bit too much, since the only thing that kept tripping me up until about halfway through this one was that they switched the S and A hotkeys.

Seriously, I had an easier time getting used to not having to wait for that godawful random-color-selector each time I placed a tower. Oh, did I mention that this is a big improvement on that design as well?

And... and the story. Wow. I was expecting another twist along the lines of the first one, but I suppose they didn't want to repeat themselves. The new story is... interesting. A bit hard to follow, but much more complex and less formulaic. And it helps, of course, that they included the best thing that seems to be a new trend in story-driven games: the ability to re-read dialogue from past levels.

And yay, monster mode is actually part of the gameplay now!

Level 22 is near impossible, it just throws too much at you at once.

use beams (especialy for infector) first, those can not be sucked by the big thing, than at he end finsh them off)

My plea to the author of this game: that thing that starts happening upon completion of level 17; PLEASE GET RID OF IT (or at least have the option to disable it). That unnecessary, distracting, and head-ache inducing graphical element where circular parts of the screen warp inward or outward under the guise of "system instability". It was neat for ONE level; but any more than that is REALLY detracting from my (and I'm sure at least a few other user's) playing experience(s). Please, I beg of you. This is Version 2.0.17.

I loved Ghost Hacker, and was enjoying Ghost Hacker 2 until I was infected and had the screen distortion. It was obnoxious and nauseating. It was enough for me to stop caring about the game and the story.

*Facepalm* I was so disappointed to find that, after all of the intro-hoopla, this was just another TD game. No thanx.

The fact that I called this game a tower-defense in the first paragraph and tagged it as such wasn't enough of a hint, huh? ;)

Well, obviously, I did not read it (or play the original)...as I often do not. I like the element of surprise.

If certain genres are an immediate no-go for you as tower-defense seems to be, you might want to at least give the tags a cursory look so you're not setting yourself up for disappointment even if you'd rather not submit yourself to my word deluge. :)