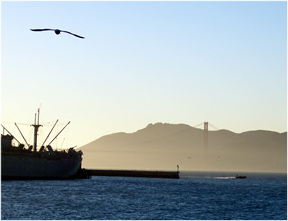 After a long week filled with events and activities, attending lectures and panel discussions on a variety of game development topics, meeting lots of people and going to several parties, I am finally back home, unpacked and rested. Although I am back in my comfortable and familiar environment, images continue to pervade my thoughts reminding me of the wonderful times I had experienced.

On Thursday afternoon, I attended another presentation about casual games, and specifically on whether Macromedia's Flash is a viable platform for producing games. The talk "What About Flash? Can We Really Make Games With It?" was given by Scott Bilas, veteran game systems engineer and director of product development with Oberon Media, and he delivered a full overview of the benefits and shortcomings of Flash from a variety of game development perspectives. The presentation originated from a paper he wrote on the same topic and can be found on his website.

Following Scott's Flash talk, it was time for Experimental Gameplay 2005 - a collection of presentations from people in the industry who have been working on games or projects consisting of unique and/or experimental forms of gameplay. This was one of the highlights of the conference for me, as there were many excellent ideas that were showcased:

An overview and analysis of the I Love Bees project was given by 4orty2wo Entertainment. Noteworthy was that they tried to make a more casual alternate reality game (ARG) of the project, and yet they didn't expect the level of involvement they received from many game players. To address the almost fanatical reaction they received, 4orty2wo augmented the original design to include personal "missions" that were unrelated to the original narrative of the game.

Mark Healey of Lionhead Studios presented a game he has been working on in his spare time for the past couple of years called Rag Doll Kung Fu. The game is brilliantly innovative, looks gorgeous, features a wide array of games and optional modes, and will be available soon "for a tenner". Keep a watch out for this one.

A group of talented students from the Entertainment Technology Center at CMU presented several mini-games and prototypes they created as part of the Experimental Gameplay project. Their goal is to create between 50-100 games in one semester containing novel interactions and novel gameplay. Each game must be made by 1 person in less than 1 week. You can download and play the games they showcased during their presentation.

Ken Stanley from the University of Texas at Austin demonstrated the NERO game based on his method (NEAT) for evolving neural networks that grow more complex as the game is played. Using NEAT, AI player behavior emerges depending on the player, rather than it being scripted or prepackaged, creating unique challenges.

Steve Okimoto, manager of developer relations for Nintendo of America, presented a post-mortem on bringing Tiger Woods PGA Golf Tour to the DS, which contained a new core mechanic for club swinging that was difficult to train the player how to use. He also presented another view of the wonderful new sound toy ElectroPlankton created by Toshio Iwai. I sincerely hope Nintendo intends to bring the beautiful and original game to North America.

Also presented during the 3-hour long GDC session was a demonstration by the Wild Divine Project's innovative mind-over-body meditation and concentration game that incorporates a bio-feedback technology peripheral as the primary interface. Although I was a bit skeptical when first learning of The Journey to Wild Divine, after seeing the demonstration and meeting a couple of the people behind it, I intend to purchase the fascinating and inspiring product soon.

The last session I attended at GDC 2005 turned out to be one of the most exciting events of all the conference. Will Wright was to deliver his "Future of Content" lecture at 10:30AM Friday morning, and so I arrived at the convention center around 9:45 to make sure I could get a good seat. When I got to the room where Will was to speak, he was standing in the front of a line that wound all the way around the corner of the 2nd floor. By the time they started letting people in, the line had more than tripled in length from when I took my spot in the queue. Many of the people behind me would never make it into the lecture.

When Will finally began his talk, he first told the standing room only crowd that he had lied about what he was going to talk about. Rather than deliver a talk about the future of content, instead he wanted to talk about a project he has been working on for the past couple of years—a game called Spore. It was a beautiful, jaw-dropping demonstration that earned applause from the audience several times throughout. Beginning at the microscopic cellular level, Will worked his way up by zooming out in succession, each time revealing a completely new phase of character interaction and development, and new gameplay to go with it.

Jeremy Parish of 1up.com was also in the audience and he has written an excellent article detailing Spore and Will Wright's presentation.

From the state the game appeared in, I am expecting Spore to be released this year, and I will be looking forward to hearing more information about it come E3 in May.

myself and a lot of other developers resented the reference by Scott Bilas;
"There are probably ten great decompilers for SWFís out there right now, but this is the one we use at Oberon. It can reverse engineer all classes used in a SWF, and does a pretty decent job of naming variables. This tool is really useful for figuring out ìhow did they do that?î when visiting a site that shows off some interesting effect in Flash"
ps: great site btw and i'm still workin through all th information in it.

hey there,
yeah,as blink said that statement made many people angry..
anyway,great sum up on the gdc,
makes me more sorry i missed it,will surely attend next time =)
(if not a deadline is avoiding that then (again)).
very nice post you made really,keep it up =)

I just wanted to add a comment stemming from the lecture, "What About Flash? Can We Really Make Games With It?"

Well, I've been playing a game called "N" for almost a year now. It's a platform game with awesome physics that's programmed in flash. It's completely free, and it's kept me entertained for far longer than almost any commercial game out there.

If you haven't seen it, it's definitely worth a look since it's comnpletely free and the download is tiny.

You can find it at http://www.harveycartel.org/metanet/ in the downloads section. It won the audience choice award for the Web/downloadable section of the IGF.

So, while I don't know what was said in the actual talk, I know the answer to the topic question is a resounding: YES!

When you say ragdoll kungfu will be available soon "for a tenner". What do you mean by a tenner? And did he say if it was for pc or consoles? Thanks.

Hey, you saw Mark Healey! Yay! I've been keeping an eye on Rag Doll Kung Fu for ages now, and am so excited that it's so close to release, looks like something incredibly unique. And yay for "about a tenner". Good old Englishness. Lionhead and their staff fookin' rawk.

Daddaluma - yes, I saw N at the IGF booths and it looks pretty amazing. Although not much to look at, the gameplay looks pretty sweet. I will definitely be checking that game out soon.

Levi - a "tenner" is 10 English pounds, or roughly $15. I believe Mark said he would be making it available from his website ragdollkungfu.com. Highly recommended!!

Capuchin - yeah, Mark seemed like a great guy, very bright and full of great ideas. And did I say the game is beautiful? =)

Make that Rag Doll Kung Fu and every single other Lionhead game, these guys are the ones to watch I'm telling you.

Yeah N is great, many a moment has been whiled away on that game. Many a moment that should have been spent calculating dipole moments no doubt :|

Anyways, glad you had a great time Jay, am still almightily jealous. Living in the UK it just costs too much for me. :/