The world is dark. The spirits of the earth have been wrongly imprisoned, turned into corrupted versions of themselves. Now, we wait for the light to restore balance...wait...what? This is a math game?!

The folks at Learning Games Labs (the developers at New Mexico State University, creators of Game Over Gopher) have done it again. They have managed to make math both fun and stylish with their latest game, Gate. While the game starts with a charming story, and the gameplay is often fast and frantic, it is teaching a basic math principal with every key stroke. You begin the game by choosing your gender and approaching a gate. A repeating visual tutorial shows you how to begin... tap out every number you see to fire a missile from your staff. Each monster carries at least one number which must be targeted in order to defeat them, and they can fly, explode into multiple monsters, or just fool you into thinking they are moving too slowly to reach you. In the first level you are responsible for one digit numbers, in level 2 you see two digit numbers, and so forth, and so on as the levels progress, but that's just the beginning. 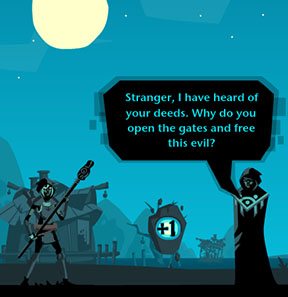 With only 16 levels, it's only going to take a couple of break-times to finish, but you get lots of content in a short space. As a math edugame, its purpose is to teach the importance of number place and introduce decimal points. As a beautiful logic game, it becomes a crazy-tapping race against freakish corrupted spirits who can hit you for all they are worth. Literally. Each level offers a new level of complexity. Adding is balanced by subtracting, tens and hundreds are made more difficult by decimal points, number stones can complicate your system. Every few levels you meet a boss as well, and you learn a little more of the story. And as we would expect from game artist extraordinaire, "CC" Chamberlain, the art is gorgeous, stylistic, and modern. It's one of the main reasons you'll keep coming back to this developer for your own casual gameplay fix.

Holy cow, is this game ever cool. By the time you get to the fourth level, the difficulty ramps up a bit and things get real!

...teaching a basic math principle with every key stroke...

If you're gonna write about an educational aspect, it would be good to choose the correct word. :)

Although it gets a tad repetitive in the middle, Gate is an addictive and visually-engrossing puzzler that serves as both a memorable math exercise and a challenging game.

Sorry for the typo, Reka. And what did you think of the game?

Well, I think for me this game is a 7/10, so let's keep this simple and organized:

-The graphics are fluent and appealing, it is great to look at.

-The music feels fitting and smooth.

-The atmosphere is interesting and engaging.

-This game truly does make you feel like you are learning, and you can sense improvement the longer you play.

-It can toy with your mind, and you have to find that perfect spot between failing to figure out what to do and over-thinking the game.

-The quick practice sessions at the start of each level help you understand new controls.

-A tip section in a game that is actually helpful? Outrageous!

-The plot is a bit of a throw-away piece, and does not add anything substantial to the game.

-The enemies do not seem like a menace, which wouldn't be a bad thing, except for the fact that the rest of the game has a dark, apocalyptic, atmosphere.

-The pause button becomes vital beyond level 10, and a pause button shouldn't be an important game-play mechanic unless it serves a function besides pausing (ex. Going back in time, earning an achievement, etc.)

-The bosses feel no harder than regular enemies, to the point of being easier. The 0 enemies released after this also seem unnecessary, and hitting the boss himself is essentially the tutorial piece between levels.

-My most major critique: The difficulty. The first 9 levels are extremely easy and unrewarding, and half the game mechanics are not necessary to complete this portion, or to even complete the portion without once getting hit. In levels 10 and beyond, the game reaches a major difficulty spike, to the point of feeling unfair. I went from having no trouble using half the mechanics without getting hit, to using all of them and dying instantly. The later difficulty would be less of a problem if the game worked you slowly into being hard, but it happens between two levels. This keeps Gate from being an 8.5 or possibly even a 9 on my scale.

While it may be great both aesthetically and in concept, the game is a bit lacking in story and game-play. Despite it's demons, under that evil difficulty spike, there is a champion of light that provides an honestly enjoyable experience.

This only gets difficult halfway through if you're not good at math. I was able to breeze through it, only twice losing one health bar but never dying on any level.

You do have to be able to do calculations in your head pretty fast, but there are some tricks to it, which the game also alludes to in some of its levels and choice of numbers. It is often easier to go above the wanted number and then subtract however much you need, saving you key strokes and thus time. And adding zeroes and moving periods is also a good way to make it easier.

This is not and should not be labeled as an edugame though. It does not try to teach you math in any way, doing so would've made the game completely different. Instead it just goes through the basic operations you have to use, one at a time. So this is a game not for people who want to learn math, but for people who already know and love math.

Neat idea! I actually didn't realize until I finished the game that there was a pause button, or that you didn't NEED to use the stones to add or multiply if you didn't want to, both of which obviously make things easier. (The pause button in particular seems almost like cheating, especially since the needed numbers don't even disappear from the screen while paused.)

It would be cool if the game offered a few different skill levels, like maybe an "expert" mode that disabled pausing, required the use of the stones, and just threw tougher numbers at you in general. That way slower calculators could still have the satisfaction of finishing the game, but faster ones would have a game that could still stress them out.

A well, a very nice game indeed. But for the true mathematicians it is not hard at all. Even with the x2 or x5 the questions can be made a lot harder!

Yes, the pause mode feels horribly like cheating, but there is a nice sense of pressure (especially after the halfway mark) and it feels very polished.
Does the game adjust itself to the speed/expertise of the player, or is it merely a fixed structure? It feels as though it could easily adapt to change the targets "on-the-fly" as it were.

I actually really enjoyed this game.

I didn't find this hard at all until the decimals got involved (but it wasn't hard to the point where it just completely stomped me out). This was a fun and challenging game.

I just wish that this game actually had some endless mode to work with. :