Cities are fun, happening places to be, full of action, excitement, and drama in spades. But let's face it; they are also crowded, noisy, and dirty. What city dweller hasn't momentarily yearned for a little plot of land somewhere and a lovely green garden? A place to call your own, a place to breathe in nature, a place to make the neighbors, well, green with envy. This is the premise of Gardenscapes by Playrix Entertainment, a hidden object game with elements of time management and sim games thrown in to make a fun, exciting, and yet curiously relaxing experience. 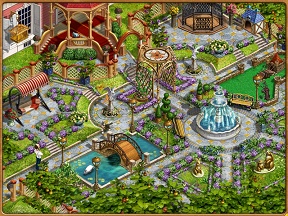 In the opening scenario you find that you have inherited your grandfather's old house, which you remembered had such a lovely garden. When you arrive, however, you will find that your grandfather's old butler, Austin, is a bit... peculiar, shall we say? The house and garden have gone to wreck and ruin and of course there's no money to be had. What shall you do? A practical person might say, "Sell the lot and be done with it" but you're not that practical. So you devise a plan to restore the garden to its former glory, hopefully in time to win the garden club's garden of the year award.

Such a clever plan you come up with, too. You decide to hold a jumble sale (yard sale or garage sale for those of us from the US of A) to make enough money to bring back the garden. As you enter a room in the house townspeople will arrive five at a time requesting certain things that they wish to buy. Each person starts out pretty happy, but the longer you take to find the item the unhappier they get, and the less money they are willing to spend. Once an item is found and a sale is made you must remember to take their money to clear a space for the next customer. Each scene has a certain amount of time in which you have to serve a certain number of customers (from 15 to 20). Once all customers are served the scene is over and you get the money from the sales as well as bonus money for any leftover time and hints. 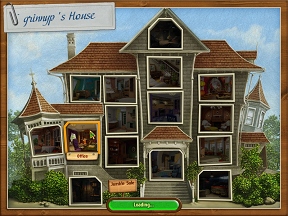 There are three, count 'em, three types of hints in Gardenscapes: one hint button and two other types hidden somewhere in the HOG scenes. The hint button does not tell you where an item is (except in the case of special requests, but more on that later) but rather shows you a picture of the item in question. If you have five customers lined up, pushing the hint button will show pictures of the five items they are looking for, hopefully enabling you to find them more quickly. However, you don't want to use these hints up as the more you have left at the end of the scene the more bonus money you receive. You can only have five hints at a time stocked up for the hint button, and if you've used one there will be a question mark hidden in the next scene to help refill the button. Hidden in each HOG scene is a camera hint with different makes and types of cameras in each scene. Click on the camera and a brilliant flash will white out the scene with the exception of the objects that the customers are looking for. But click fast, because the flash fades quickly. There are also two thermometers hidden each scene which will start a game of hot/cold, causing the customers to either ice up or glow red when you are far away or near the item that they want. Of course, each type of hint can only be used for the customers that are on-screen, so they only work for at most five items. And if a customer is requesting multiples of an item, say three umbrellas, the hints will only show one.

Once in a while a special request will come in from a townsperson for, say, 20 of an item. A local low-budget film director, for instance, might want 20 blow-dryers to help recreate a typhoon (now that's low budget). In those scenes the hint button will directly point to an object in the scene, but only one. Other special requests might come in to find pearls or candy in each scene in addition to all the other objects customers are requesting. Add to that each scene hides several gold coins which when found add to the monetary total. Between regular customer requests, special items, coins, cameras and thermometers, each HOG scene can become fast and frantic while the clock is ticking.

Between each round of HOG goodness you will head back to the garden to make decisions. Each section of the game deals with four garden features that need to be upgraded. Each feature itself has three choices and three different price points, from low- to high-end. When you have enough money from the sales, upgrade your feature and go back to selling. Eventually the garden will take shape in all its glory, from the carefully trimmed topiaries to the calm pond (with swan, of course), from the formality of the central fountain to the playfulness of the miniature golf course, and much, much more. 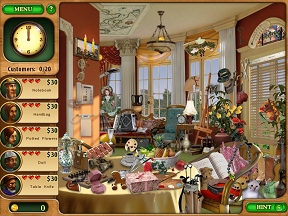 Analysis: What makes Gardenscapes such a fun, rollercoaster ride of casual gameplay is the contrast between the frantic, almost time-management style of the HOG scenes and the calm, relaxing joy of the garden. As the garden becomes more and more restored you will begin to notice all the lovely hidden details. Animated butterflies and song-birds flit everywhere. Austin the forgetful butler wanders through the scene, sometimes answering the phone, sometimes picking up the mail, and sometimes gently reminding you that there are goals to be obtained. But slow down and take time to explore the garden, it will be worth your while. Click on things and see what happens. Half of the delight of the game is just taking time to play around with all the possibilities hidden within the beautiful scenery. You can even set the garden as a screensaver to enjoy watching it when you're not playing.

Artwork in the HOG scenes, is bright, vivid, 3D and photo realistic. The garden scenes are cartoonier and animated, with Austin the butler and the dog (which, once acquired, you can name anything you want), butterflies, birds, and other animated surprises as the game goes on. It even rains occasionally! Hovering your mouse over certain items in the HOG scenes triggers animations as well. Lots of thought and effort have gone into making Gardenscapes a treat for the eyes. Sprightly music and background noises add to the enjoyment, whether in the frantic HOG scenes or the Zen-like relaxation of the garden. And for those who like the HOG aspect but don't want the jitters that go with timed play can switch to an untimed mode, turning the entire game into relaxed, casual gameplay.

Perhaps best of all, Gardenscapes is an open-ended game. Gameplay does not stop once you've completely restored the garden and won the garden club award. In fact, you can continue to hold sales and earn more money. Why? Because of the nifty "design" feature of the garden. Decided that the benches and the fence don't really go together? You can go into the design feature and change an item for one of the other two choices originally presented. Want to completely redo the garden in a summer theme? You can do that too, but of course you need money to do so. You can continue to play the HOG scenes and redo the garden over and over to your heart's content. Considering the current length of most HOG games, this makes Gardenscapes a heck of a deal with the possibility of hours upon hours of enjoyment.

Played in small chunks or huge blocks of time, Gardenscapes is casual gameplay at its finest, a never-ending delight of HOG fun intertwined with the sim-like atmosphere of spectacular garden. It's time to pull on those gloves, slap on a sun-hat, stake a "jumble sale" sign in the front yard and go green!

Great game! At first I was tempted to compare it to Fabulous Finds, but this one is more personal and more varied. I don't usually like hidden object games, cos you end up looking for stuff you don't need- no such problem here. The butler is such a nice addition to the game, at times you'll get the feeling that he's actually talking to you. Also, the bit where he

asks you to name the dog

is so adorable and makes you really identify yourself with the character you're supposed to be playing, i.e. the new owner of the manor.
Can't wait to see how it ends :)

One thing I particularly liked about this game was that the objects you were looking for were actual objects and not, say, an outline of hammer superimposed over a curtain. Another good point in game play that I appreciated were that not all objects remained in a fixed place in each scene so you still had to actively look for them (there were some hidden-object games where it got really easy to find everything because the same every time you returned to that scene). It's a fun, family-friendly game that I really enjoyed.

Fun HOG game, but considering the fact that I personally can't grow a fungus and hate to sell anything that belongs to me, I guess it made me nervous. I did like buying new things and making the garden look nice.

I was looking for a guide on how much money everything was, and the easiest way to get it all and do it quickly, like they do for other games (like Virtual Villagers) but it doesn't matter, I guess.

Gardenscapes is a really fun game that is addicting to play and memorable to finish. I always thought it was like an accomplishment, you just had to keep going and going even when the going was tough, to get the job done.

Finishing the garden was really my motivation. I really wanted to see how it would look restored to it's former glory. I also liked how there were options, there are probably a ginormous number of garden combinations, so that two people probably won't have a garden with exactly the same stuff.

I should probably shut my mouth now, but I really love this game. Playrix Entertainment, job well done!