Back in 2009, Playrix Entertainment — those purveyors of wonderful time management games —created a hybrid between time management and hidden object finding. Three years after Gardenscapes debuted, its lovely sequel has finally landed: Gardenscapes: Mansion Makeover! And this time, it's personal! Or, at least, indoors. 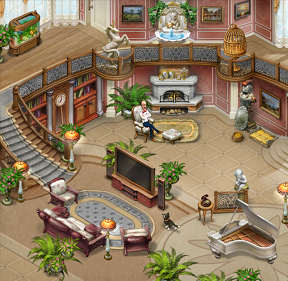 For those who have never played Gardenscapes before, let's get you up to speed. Through a lot of hard work you (with the help of your dear butler Austin) managed to bring the grounds of your late grandfathers' mansion back to life. The decision to move to the country turned out better than you could ever hope for, didn't it? Between the regimented flower beds, the lovely paved walks, and the killer miniature golf course you made your garden the envy of your neighbors and the winner of the local garden of the year award. Now it's time to sit back, relax, and invite a few friends over to enjoy the fruits of your labors. Oh, except you spent all your time on the garden and the interior of the mansion is a bit, well let's say run down, shall we? Okay, run down is not the word. The mansion rooms are still full of junk you haven't gotten rid of and the great hall is a mess, and your friends are due soon. Time for more yard sales!

The basic mechanism of Gardenscapes: Mansion Makeover is the yard sale hidden object scenes. In each room of the mansion is a pile of junk just waiting to be claimed by its rightful owner. Customers appear on the left of the screen five at a time, asking for items that can be found in the room somewhere. Find and click the items, take their money, and help the next customer that appears until you have cleared the level. The faster you find and sell the items the more money you make, money which can then be used to purchase furniture and repairs to the main hall of the mansion, decorating until it reaches a point where you would not be embarrassed to host an intimate gathering of your closest pals. Along with the items for sale each room also harbors a few secrets such as coins scattered about the place which you can collect for extra cash, and several varieties of hints from thermometers (to play the classic "hot-cold" game), cameras (which highlight wanted items) and question marks (which you collect for the standard hint feature). 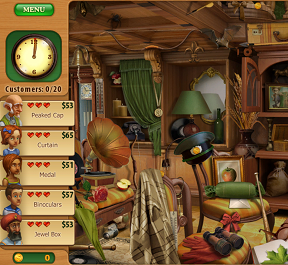 Most scenes involve different customers coming and going, interspersed with special one-item scenes in which a customer would like you to find 20 of a single item. These one-item scenes don't pay in money, instead the customer will gift you with something that will help spruce up the place like paintings or statuary. Everything else you need to make the foyer look like "The Bronson Pinchot Project" can be purchased with the cash accumulated in each standard hidden object scene. Each item you purchase offers a choice of three or five different models and colors so the mansion can be personalized to your tastes. Once you've bought everything a party will erupt with some surprise guests, characters from other Playrix games like Royal Envoy, who have come to enjoy your hospitality.

Analysis: Gardenscapes: Mansion Makeover has been designed to appeal to two widely divergent casual customers: hidden object fans and those who love time management (these are their stories). This give the game wide appeal across a broad field of players, and each element is spot on. For hidden object purists who disdain the adventure trappings of today's casual hybrids Playrix features an untimed "relax" mode which keeps the hidden object goodness constantly coming. For those who like more of a challenge there is the timed mode where a room must be cleared within a certain number of minutes, and customers start getting cranky if they don't get their items right away. 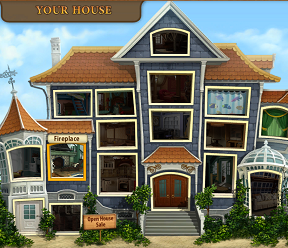 The graphics are strong, clear, sharp, and beautiful in both the hidden object scenes and the main hall. Amusing animations of Austin the forgetful butler, the pet dog, the pet bird, and other items bring the space to life. The hall itself with its plethora of animations can become a screensaver to amuse even when the game is not being played, and you can spend a lot of time just enjoying watching the place come to life. An additional bonus is your ability to interact with the scenery by clicking on it, directing Austin to play with the dog, feed the bird or the fish in the aquarium, clean various items, or sit down and watch the big screen TV which shows clips of various talking heads interspersed with promos for other games in the Playrix stable such as 4 Elements II or Royal Envoy 2.

Perhaps the best aspect of Gardenscapes: Mansion Makeover is the fact that the game never really ends. Even after the star-studded party is thrown you can continue to hold sales and use the money to change the decor at your whim, meaning lots and lots of hidden object finding for those who really enjoy that aspect of the game. There are amusing details wherever you look, from lamps that actually turn on and off with the click of a mouse to the outside weather (glimpsed through the upper balcony and other windows) which can be randomly sunny, cloudy, or raining from moment to moment.

Although the time management elements are not quite as engaging as they could be that is a minor criticism in what is otherwise an overwhelmingly entertaining game. The sim elements of the mansion hall are a nice break in-between the frantic hidden object scenes, and Gardenscapes: Mansion Makeover is a game that you can return to time and again to satisfy the craving for more amusing gameplay.

After you find the Biscuits, drag them from the bottom of your screen to Austin. Then pick up the Stick and give it to him as well when he asks for it.

When you find all of the jar pieces, take the jars and put one under each dripping spot. Open the toolbox and retrieve the wrench, then use it on the pipe on the second floor. You can then remove the jars by clicking on them.

Once you have the cables, you will have to plug each one into the jack corresponding to its color.

Use the axe to cut up the larger log so you can use it for firewood.

Oh, I just beat this game the other day! It was nice, though there were some points where it would ask you for something, and there was another object in the room that had it but it wouldn't count. Also it kept thinking baseballs were tennis balls, and some other mistake? Maybe it was just the version I had.

After you find the Biscuits, drag them from the bottom of your screen to Austin. Then pick up the Stick and give it to him as well when he asks for it.

When you find all of the jar pieces, take the jars and put one under each dripping spot. Open the toolbox and retrieve the wrench, then use it on the pipe on the second floor. You can then remove the jars by clicking on them.

Once you have the cables, you will have to plug each one into the jack corresponding to its color.

Use the axe to cut up the larger log so you can use it for firewood.