As evidenced by a flood of Flash-based titles in the last year or so, tower defense games are all the rage. Now, iWin is throwing its hat in the ring with Garden Defense, a full-blown downloadable tower defense game where you save your garden using gnomes, flamingos, cupid statues and a host of plants to fight off waves of attacking bugs. It's eat or be eaten in this easy to learn but surprisingly challenging strategy game. 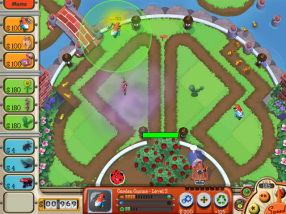 The basic set-up of Garden Defense is similar to most tower defense games. Each stage has a winding path where off-screen enemies will eventually walk. Using a limited budget you must purchase, place and upgrade a variety of "towers" (plants and garden gadgets, in this case) to attack enemies as they pass by. As soon as you have the stage set, click "ready" at the bottom of the screen to unleash the bugs. As they march through the garden your faithful soldiers will attack. The more bugs you destroy the more cash you earn to upgrade and buy more defenses.

Enemies come in all manner of entomological sizes and shapes, including butterflies, beetles, flies, even snails and centipedes. Each tower has a specific purpose and can deal with bugs in a different manner. For example, gadget-type towers such as gnomes and flamingos have the advantage of being mobile. After they attack the enemy out of the gates, simply pick them up and move them down the path for another round of combat. Other units such as the nightbell flower attack groups of enemies, while the cactus is specially adapted to take out airborne enemies.

In addition to purchasing more units, cash you earn from defeating bugs can also be used to upgrade existing towers. Higher-level units deal more damage, fire faster, and often have a greater range of attack. Sometimes an upgraded tower is a smarter purchase than a second, low-level one, but balancing between the two is part of each player's strategy. 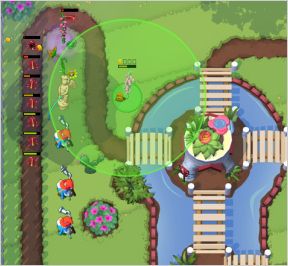 After a few levels of bug smashing you'll gain access to the lab, a place to spend skill points (automatically awarded after each stage based on your performance) to boost groups of statistics. Here, you can buy upgrades that power-up all plant units to deal 25% more damage, decrease the time it takes for gadgets to reload after you move them, and much, much more. The lab is what makes Garden Defense really interesting and allows for a deep level of customization. And you'll need it, too, as the game gets much harder as the stages go by.

In addition to the main game, Garden Defense comes with a number of just-for-fun extras, and as you play you'll also unlock a number of challenge levels. This, along with over 100 waves of enemies to dispatch, will give you several hours of garden-related carnage to enjoy.

Analysis: I enjoy tower defense games now and then, mostly just to dive in, destroy some dirty creeps, then feel all superior because I can upgrade my weapons and cause even more destruction. Garden Defense didn't immediately strike me as a serious contender for the tower defense crown, but as soon as I started placing gnomes and spitting sunflowers, I was throughly hooked. Even though it doesn't put on the same dour facade as most TD games, Garden Defense manages to pack a lot of customization and strategy into a pleasing (and easy-to-learn) package. iWin didn't skimp in the sound and visuals department, either. Music throughout the game is light-hearted and catchy, while the graphics are crisp, colorful and easy on the eyes. The game's story is told through a series of animated cut scenes complete with voice narration.

The most dangerous thing about Garden Defense is its playability. It's good in short spurts, it's great for marathon sit-downs. It's more robust than many Flash tower defense games, but it's also more accessible and doesn't take itself so seriously. With that slight edge of humor and brilliant production values, Garden Defense can woo just about any gamer.

Garden Defense is available to download from these affiliates:

Wow, I really really wish this was available for the Mac :-(

I have this game and have to say, it's great fun and has great replayability.

I can't play because it seems to be stuck on "activating" is anyone else having this problem?

Typically, as soon as I posted it decides to work, figures.

I agree with your review. At first the game looks too cutesy and lame. Give it a shot though, I ended up buying it and have enjoyed it greatly. Working on all my 'Very Hard' badges now... and I still have a few challenges to unlock.

I am stuck on the last challange level on Garden defence. I have tried most everything.
Does anyone have a way to beat it? I need to get back to my life and stop playing this! But... I need to beat it first.

does anyone know what is the most effective against centipedes?

I am stuck at the last lvl of museum.

at the 1Oth wave you have two centipedes and they almost destroy half of my flowerbeds health!!
At wave 20 or something I slowly die , but the main problem are the centipedes I think.

It would be nice if someone made a walkthrough for that lvl !!! :p

A good trick (not really for the centipedes, but in general) is setting the time progression to slowest and micromanage shuffling your gadgets around to where they're most useful. If you're used to other TD games, it's easy to forget that gadgets can be moved. That's saved my bacon a few times.

I believe that the nightbell(or whatever they're called) are supposed to be good against centipedes. Somewhere in the tutorial it says that anything that causes area of effect damage is good against them, basically treat them like a long line of ants.

To master the last challenge level you will have to use the spider whenever the cooldown is ready in combination with a slowing flamingo. I also used the bugs. This last level is very time consuming and boring, because you always have to do the same things and you can not play on the fastest setting.

I think that Garden Defense is a very good game, but it is too easy (I've played all levels on all difficulty settings) and too short. It would e.g. have been a good idea to unlock an additional difficulty if you managed to get through all levels on the hardest setting. The replayability is not very good.

Here's a cheat if you haven't stumbled upon it yourself. Build a level 8 bug house. Play one more level once it's level 8. At the end of that level go to menu and select "Quit Game". Once you are back on the title screen select play and continue the level. Now if you recycle the bug house you should have unlimited money. Hope this helps, don't abuse it.

I too have beaten the game on every difficulty setting. There are several challenge levels as well. Has anyone heard of a Garden Defense 2 coming out?

I found this game elsewhere, and absolutely love it. I was prepared to buy it from Big Fish Games, but I clicked "buy now" and it wasn't available. Should've come here. I searched frantically for it, then found it at iWin. One problem - ads come and slow down my computer, and it takes forever to load. I'm not going to buy it. I love the game though and play it nearly every day :D
Off now to try Nate's cheat, and see if it works. See u!

Here's how I completed (perfectly, with no pest survived) all the very hard level at fastest game speed:
- Have 1 or 2 gnomes at the beginning of the level. Do not upgrade them. Recycle them as soon as possible.
- Buy only 2 sunflower (they will produce more sunflower for you). Upgrade them whenever you can
- At each turn, after you upgraded sunflowers, if you have any money left, buy one flamingo, and one cherub. After that, upgrade flamingo to maximum, upgrade cherub, but not to cupid.
- You should always have enough money for one spider when you need them.
- You don't need any bughouses, nightbells or cactus
- If you place everything at the right place, you will be able to win

Has anyone else used only plants on Museum Level 2 on the very hard setting and achieved victory with a perfect game, all pests stopped? I got up to wave 30 with 29 perfect waves 19 times each with a different defense layout of only plants, and on game 20 I just barely made it through wave 30 and finally got a perfect game. I also had every upgrade from the lab and actively targeted bugs individually, and I had to sell plants that were out of range for last second upgrades. It was one hell of a challenge.