The second tenth of the 20th century was a period of slow cars, tommy guns, and an illicit narcotic called alcohol. And, of course, the mob. Amongst all of this a man is just trying to make an honest buck and follow his dream: his own car garage. Angelo's in luck, though, because his cousin will loan him the money to get started. But, boy, he is sure going to work hard paying that cash back. So are you... start warming up your mouse reflexes for the speedy time management game Garage Inc. 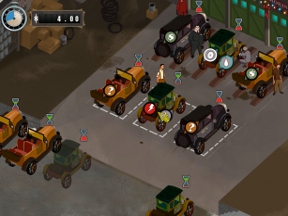 Running Angelo's garage is a cover for a familiar and straightforward speed-management game. His humble business starts off with a single bay setup — first to inspect the car, then to the repair bay, where it gets fixed. When a customer arrives, they are placed on the inspection bay with clicks of the mouse. Then Angelo is instructed to inspect the car. After a small timer counts down, the car is inspected, and another two clicks drives it up to the repair bay. Similar instructions moves Angelo over to make the repairs. In the mean time a new customer has shown up, ready to be moved to the inspection bay.

The point is to fix the cars are quickly as possible. Cars will have different problems — for example, it can have an electrical and mechanical problem. That means both the electrician and mechanic have to be assigned to the car. Workers can be replaced with more skilled employees, but you pay higher wages for their services. You also only have access to one of each worker type. As you advance, you get more bays — for a maximum of three (each with an inspection and repair bay). Customers line up — there are several types, each differing in speed, range of problem types, the amount they pay and how patient they are. At times special characters will appear and produce more prestige and cash if served quickly, but quite the opposite if you fail them.

As always, management gets in the way of running a smooth system. Angelo is the spanner in the works, as he is the only person who can inspect a car and collect payment after repairs. So, apart from juggling the workers between different job types, you have to hustle Angelo around between inspections and getting the cash, without interfering with the regular work (he just really slow, you know?). 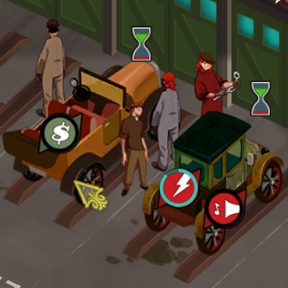 Analysis: If you have played games like Country Harvest and Cake Mania, Garage Inc. will be very familiar. It's all about speed, precision, finding a good pattern and working around sudden changes in the order of things. There are around 60 levels, with a mini-game every five or so. The mini-games are basic dexterous challenges, tracing along lines or moving things with the cursor. The real excitement is on the workshop floor. And it gets really exciting — the problem with speed-management games is they often force you to juggle too many different things. Garage Inc. keeps stuff simple, allowing you to focus on specifics, which works very well in the overall design of things.

Unfortunately the developers did not deem it worthwhile to add a level selection option, nor some type of infinity mode, where you can keep building cars towards a high score. The story mode is engaging enough, but after you finish it you have a real hankering to see how far you can get with the game. Your only option is to restart. This is really something that should be fixed in a sequel and, frankly, is pretty sloppy and shortsighted. The mini-games can be replayed, but they are hardly the highlights of the overall experience.

Garage Inc. is a lot of fun, which makes the inability to replay or really push your newly-acquired workshop-management skills a really big shame and oversight. It's also not nearly as hectic as other games in this genre, so more experienced mouse ninjas will breeze through it (but still enjoy it). Garage Inc. mixes just enough demand for speed and accuracy (and keeping your head) to make for a thoroughly enjoyable experience for almost anyone.

The 20's were the third tenth.

I found it mind numbingly dull

I agree, one of the most repetitive games of this genre I've ever played, not to speak of the horrible controls. The review sounds more like a press promotion than an actual review of the game.

The only good thing about this is the artwork. The controls are terrible and the game is too repetitive, and dull. No sense of achievement. Just frustration when you can't select what you want to select ALL THE TIME!

I really liked this on my iPod--seeing Canadian games out there was great--and when I finished the game, it felt a bit short. I was hoping for a few more chapters, something I usually don't do (I can only play time management games for so long before I get sick of them). However, the game is designed to need to scroll sometimes, which was difficult on the iPod, and the controls weren't always accurate. Overall, worth a try (especially if it was free, like mine!)