Yearning for that next tough-to-put-down tap game for your mobile device? Game of Loot is a free iOS and Android match-3 style game that's themed like a sweet dungeon crawling RPG from the days of yore with a healthy dollop of modern-day crafting thrown in for good measure. Combining the best gameplay elements from each of these genres, Super Ultra Hyper have given the whole thing a crisp, visually-pleasing and 'action hero comic book' graphical format and buttery-smooth feel, making for an environment that's eminently comfortable to interact in. Tap to remove groups of three or more tiles, which also sends your conveniently color-coded questing heroes on the attack and recovers their stamina. Fight unique dungeon creatures with gameplay-altering special abilities, earn recipes and crafting materials, and upgrade your party's equipment for even better hauls! Rows of colored tiles will advance from the bottom of the screen, and if they're push all the way off the top your corresponding heroes will take hits! You'll need to be quick to spot and collapse groups of three or more, which will alter the grouping of the remaining tiles. Dungeon critters will often have their own special abilities, such as increasing or decreasing the tile spawn rate while they live, or turning various tiles to stone or bombs. You can revert them by matching adjacent tiles, but eventually remaining bombs will explode and your party will take damage. 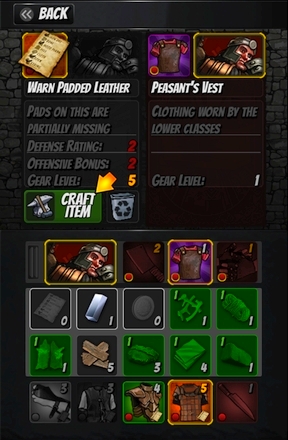 Make it through levels to gain new equipment recipes and crafting materials, and even fuse discarded equipment right back into your current set to enhance its effectiveness. When you can craft something new, the game will [optionally] alert your attention to it and show you, move by move, how to craft and equip a new recipe and even suggest what to fuse with it. Your party's total Equipment Level doesn't just improve your abilities, it's also needed as a minimum entry requirement to new dungeons — though you can keep revisiting the 'Special' dungeons to collect the crafting materials needed to improve that rating. Entering a dungeon will also take a certain amount of your Stamina, which refreshes quickly and whose maximum increases with every upgrade to your Equipment Level. Currently, dungeons on par with your party's abilities can snag up to a third of your available stamina at a certain point — meaning you can play about three dungeon crawls before the game demands that you either wait about an hour to play on, or else pay real money to refill your Stamina meter. While it's true that you can play without ever buying a single Platinum Bar or Stamina refill, Game of Loot isn't shy about halting the gameplay and this aggressive of an IAP strategy is something we were disappointed to encounter. While we can hope for better rebalancing of Stamina in subsequent updates, it's essentially the only critical flaw in an otherwise superb and engaging game. Due to the slick visual presentation, load times are a breeze even on older mobile devices and with the very user-friendly environment and addictive gameplay, Game of Loot is the next title you'll be fighting a strong urge to keep pulling out and playing in those spare moments throughout your day.