When we contemplate space exploration and first contact with alien races we're usually thinking of a universal federation of peace and harmony, equal rights for all, the complete alleviation of poverty, and molecular food replicators. But why would we want all that, when we could conquer every galaxy and raid them for all the resources they have? It's an upgrading, resource-nabbing free-for-all as Vasiliy Kostin presents an alternative take on things to come in Galaxy Siege, a space-themed upgrade shooter that would have even the Hungry Hungry Hippos daintily dabbing at their mouths with a napkin corner and saying, "No really guys, I just can't, I'm too stuffed." 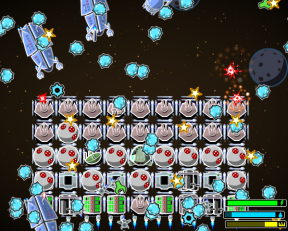 You'll slalom your craft with the left and right [arrow] keys, automatically firing on anything you encounter that isn't a resource. Those your shuttle will automatically collect with its grappling robotic arms whenever they're within range. You fly a straight course through various galaxies, each with three sectors and a Major Bad Dude at the finish. Your shields, grapplers, fuel and firepower are all dependent on whatever you've got onboard, so accruing resources is of major importance if you're going to defeat every other creature in the universe. If you run out of fuel, your ship will lose all control and momentum and just start listing lazily at an angle — but the good news is that the autosystems for your weapons and grapplers still work, enabling you to keep collecting any resources conveniently nearby until you warp out of there. You'll immediately flee the galaxy if you take too much damage, but you can also warp out on your own whenever you like. Where do you reappear? At a Shop of course, where you can buy all sorts of snazzy add-ons and upgrades with those resources you've collected. And upgrade you will, if you expect to make it out there! 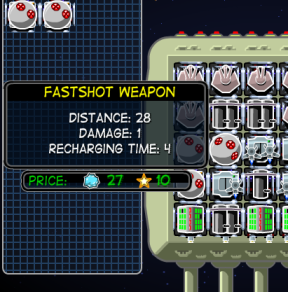 Other than your armaments, where you arrange them as you upgrade doesn't have any game effect on your ship's performance. In fact with no aerodynamics in space you can place components anywhere at all in there, and since you're constrained by the size of your current scaffolding your ship will eventually come to resemble a slice of modular robotic toast. Fortunately, upgrades are indeed available to expand your scaffolding and grow beyond the limits of your vessel's current size. In fact you can blip on out of a galaxy if you're stuck, and come back later with more resources and upgrades from the Shops in other galaxies.

If you play Galaxy Siege looking for a thrilling space-themed action shooter, you'll definitely be disappointed. With the weapons systems on full auto and completely dependent upon how well you've upgraded your craft, frenzied shooting and deft maneuverings are just not where it's at. But that isn't the charm of this game. If you enjoy planned upgrading, growing a system piece by piece to achieve today what you couldn't before, Galaxy Siege will most likely appeal to you. As in life, sometimes the planning is where it's at more than the conflicts. Not in our stars, but in ourselves that determines our results.

Fairly straight forward game, fun and easy, that is until you get to the end and no matter what configuration I've tried I can't get passed about half way to the last planet. Any tips????

Got it, just keep buying those little green weapon power boosts. Kinda took the fun out of it a bit to be honest, more movement on the screen would of being nice. Still I finished it, so thank you to the developer and programmers I had fun.

That's interesting, I'm having the same problem as the guy above, but I already bought all the green weapon-upgrade thingies, still can't get past halfway. Anybody has some hints on the configuration?

Other than the last level it's a fun little game, not spectacular and indeed it feels pretty linear and 'automatic', but still, fun to play.

Ok, think I have some more tweaking to do, I never let my ship die, but evacuated before damage ran out. But if you die you sometimes get ejected out of the galaxy to the map and when you re-enter, the shop has different stuff. So there' s more green upgrade things and more higher level weaponry available now. Let's see if I can pull it off now, still hard...

Heh, ok, nailed it. If only I had figured out sooner when the shop gets refreshed ;-)

I cannot buy any more green-weapon upgrades either even though I have lots of resources to spend, so I'm stuck at the halfway point on the last galaxy and am giving up. Also would like to enlarge my ship but can't.

The way i passed the last level was i built around 6-7 of the "25% dmg to all weapons", I had around 2 and a half row worth of weapons (mostly turrets) scattered around my ship and around 5 of those "+1 energy per second". I kept 2 of those collectors and rest was shield. I wouldve uploaded a screenshot of it, but as soon as the game finished, the game reset! Just make sure as soon as the enemy ships got close, they wouldve been quickly destroyed and not make it to the back. You may need to build more of those 25% amplifiers! GOOD LUCK

i have the combo to finish the game it is ... http://s13.postimg.org/4r6v7taqf/galaxy_siege_final_comb.jpg

do i need to keep the big modules for defense in front of the ship?

Defense modules will work anywhere you stick them. In fact other than weapons and grabber units, it doesn't matter where modules are placed.

You need only 2 engines (this is key), 7 rockets, 8 lasers, 1 collector (just in case you need some more resources), 7 weapon boosters, 7 shield regenerators, and I think I had 8 shields. I was wondering though if you could get away with less shields and more regenerators.

Incredible. Apparentely if you change of tab in your explorer (I was using chrome), during the game, your ship will pass through. At first I thougt it was coincidence. But It happened twice. Must be an error in the game script. Don't know, but it works. I know its cheating, but I could't either buy more green stuff.
Sorry for my english.