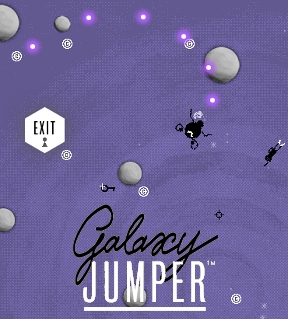 Do you remember the GameBoy when it weighed as much as a brick and you had to spend most of your allowance on batteries? Me too. Galaxy Jumper, the new puzzle-platformer from NinjaKiwi, isn't on the GameBoy; it just looks like it is (plus a few extra colours), and I probably would have enjoyed my childhood electronic entertainment a lot more if it had been. You play a nameless black figure, leaping from planet to planet, in your quest to... uh... leap from planet to planet.

The aim is to collect all the keys in each level to open the exit. Simply point your mouse to choose a direction, and click (or use the [spacebar]) to jump; you can tell where you'll land by the soft glowing white light that appears on a surface when you point your cursor in any direction. Miss a jump and you'll go hurtling offscreen and have to start the entire level over again. You also have to start over if you run into an enemy, get blown up, or otherwise smote. You unlock new levels by spending the coins you collect, so make sure to grab them whenever possible.

Galaxy Jumper is a good example of a simple concept done up right. Each level presents its own challenge that keeps the game from becoming repetitive and wearing out its welcome before its 27 levels are done. As you go, you'll encounter new obstacles such as planets that explode if you stay in one place for too long, or vanish once you leap off them. The problem is the one-hit KO aspect; as you can progress, levels can get quite large, and to be punted all the way back to the beginning of one because a monster rubbed up against you can be very frustrating. Of course, since all that's required to play a level is a certain amount of coins, you can simply bribe your way past one if you get stuck.

Not that you should need to. Even the levels that demand constant movement don't require you to be a wizard at the controls, and the game maintains a nice difficulty curve rather than the soul-crushing pain most "retro" platformers seem inclined to deliver. The levels are a nice mix of reflexes and simple puzzle solving, and combined with the stark presentation and atmospheric soundtrack, makes for a very fun experience. You don't need a lot of flash to make something fun, and Galaxy Jumper proves that point with style.

Fun game! I find that there's a bit of lag (but I'm pretty sure that this is just me) which is making it hard to enjoy some of the levels.

I appeal to the mix of vectors and pixels that they used.

Not bad (though I wouldn't call it a puzzle-platformer), but I'm frequently finding that my clicks aren't being registered. On levels where failing to click means instant death, this is more than a little frustrating.

I'm also getting lag. That plus a touchpad makes higher levels impossible.

I haven't had any problems with clicks not registering. Sometimes I think they might not be, but I realize I'm trying to jump too far sideways.

I really like it, feels very similar in tone and mood to Osmos, which I love.

There are some planets that turn into stars if you stay on to long so get off of them fast. And i agree with Buttons, there are some levels that when you fail click because you can't jump there is kinda annoying. Anyway, fun game notheless.

Jay i forgot my password and so i can't login and when i try to do the password recovery the stie says " Cannot connect to server. Please try again." My account name is Franticforgames. I have a new computer and uses safari and my computer is an Imac. Help please, thanks in advance.

[Hmm, I can't reproduce the problem you're having. Please send an email to our "contact" address (link in the site footer) and I'll help you recover your account over email. -Jay]

Man those planets that turn to stars are hard. You've gotta be quick!

I'm a little over half way through and really liking this.

Positives: a stiff challenge, lots of levels with good variety.

Negative: background could have been more detailed or multi-layered.

As Goeiz mentioned there looks to be 35 levels not 27 as per the review (the way the level map branches makes it easy to miss levels).

Very nice game. Fun jumping mechanic and great variety in the levels. It can be a bit frustrating at times, but the satisfaction of finishing the level is much more intense after some failed attempts.
Try it !

A fun game, but the later levels just get frustrating. I don't even think Level 34 is humanly possible without computer-aided assistance. Seriously. I beat it by "cheating":

I paused the screen by right-clicking my mouse, to have time to get my bearings each time before the insanely, insanely, did I mention insanely fast little critter got me.

Even using the dishonest tactics, it STILL took me fer fricking ever to beat it. Not fun.

It can certainly be frustrating at times, but remember you don't need to get all the coins. I finished the game with 109 spare coins.

There's one screen with a super-fast bad guy. I basically just bolted for the key then bolted out, disregarding coins.