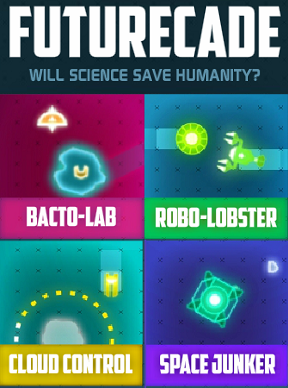 We can be so wrapped in the everyday use of technology that it become difficult to recognize how miraculous it truly is. Anyone with an internet connection can do dozens of things that the richest robber baron of a hundred years couldn't dream of. And yet, even in the midst of this plethora, science still moves forward, at a rate and to goals that, when reached a century hence, will be astounding to modern society. We are allowed but the merest glimpses of the possibilities that the future brings, so when the London Science Museum puts some of those glimpses in the form of Flash arcade games, that's something worth noticing. Futurecade, developed in conjunction with Preloaded, is a quartet of slick science games that show the future's so bright, you'll have to wear shades... for all the neon, if nothing else.

The presentation of the games are very similar, even if the gameplay isn't. All are controlled with the mouse, however. In Bacto-Lab, you must drag your bit of E. Coli to collect DNA in the proper sequence. Robo-Lobster has you guide your gang of, uh... robo-lobsters keep the harbor safe, by clicking the incoming unexploded mines. Cloud Control sees you controlling ships and circling grey clouds to brighten them, so as to better reflect sunlight. Finally, there is Space Junker where you guide a ship that protects orbiting satellites by clearing the debris from their path. The high scores of each game are added together to create a final ranking. Will you reach the rank of Science Master?

Analysis: Futurecade is similar to the exhibits that inhabit many Science Museums, London's presumably included. The presentation attracts the eye, the flashing lights and movement keeps one interested long enough for the desired bit of knowledge to be imparted, and, though you soon will move on to another installation, you'll definitely enjoy your time. Each of the individual games have their strengths and weaknesses, but putting them together like this makes up for each one's lack of depth. It's not quite like having a home version the Museum of Science and Industry, but it comes darn close. 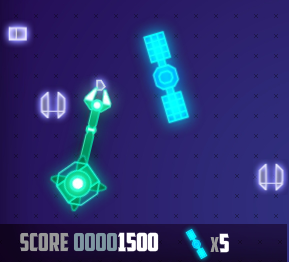 Robo-Lobster is probably the strongest of the works included, but let's face it, when your game stars Robo-Lobsters, you really have to work at messing that up. The fact that the premise, that Robo-Lobsters exist and are out there defusing bombs, is the most blatantly "Mad Scientist" of the four certainly helps, as does the gameplay, which is the most challenging of the four. Another highlight is Space Junker which, despite its loose control scheme, plays like what Asteroids would be, if the guys at Atari had spent the day playing defense games and watching Planetes. Less inspiring, but still fun, is Cloud Control, a game whose low difficulty level detracts from interesting gameplay, and Bacto-Lab, which takes a great premise and cool science, then weakens it with poor controls.

One of the best parts of Futurecade is the follow-up text each of the games has. It can't help but feel a little tacked on, but it shows the extent to which the developers integrated the educational aspects in the gameplay. It's nice that each game ends with a question. Is it dangerous, or even immoral, to meddle with the functions of viruses? What tasks are we comfortable handing over to machines? Is the solution to global warming pumping more chemicals into the air? And so on. Futurecade is only an introduction to these concerns, however that's exactly what it wants to be. It is an entertaining collection of minigames, yes, but also an insightful one, and best of all, nothing of either is sacrificed for the other.

The better you get, the worst the problem gets...until you die. What kind of science lesson is that?

I think Space Junker was the best of the games. But I wish it represented continuous space, and just shifted the view, rather than wrapping around when my ship out of the game area. I learned not to lose control of the ship near the edges, but it added an annoyingly non-realistic aspect to the game.

"The high scores of each game are added together to create a final ranking."
That's wrong. The scores are added, not the high scores.