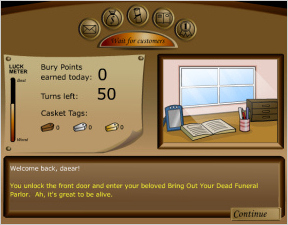 Funeral Quest is a travesty of lemonade stands, sim games and common decency in general. Basically you open a funeral parlour and handle customers. The aim is to gain Burial Points (which is your ranking) and earn tags (currency), while engaging in a spot of skullduggery to advance your standing and income.

You will have four economic classes of customers, from Poor to Super-Rich, with a variety of emotions when they visit you. Your aim is to get them to buy the most expensive funeral they can afford. If you push them over their limit, they'll go to the competition. You can use Guilt and Sympathy to increase their willingness to spend, and Hard Sell and Soft Sell to increase the amount of money you'll be getting.

In the meantime, other events await your attention, such as the presence of ancient scrolls, run-down gravestones and opportunities for necroporn (in case it's not obvious, this game is not kidsafe). Doing the moral thing will always get you a small amount of Burial Points... but doing the wrong thing is not only more fun, but will either gain or lose a large amount of points. To make matters even more fun, Funeral Quest features Player vs Player (PvP) battle! Increase your strength at the University, buy up knuckledusters and body armour and beat up the competition. You even have the opportunity to hire someone to arsonize another funeral parlour. There are heaps more fun things to do, you'll just have to explore them all.

There are a number of servers that host Funeral Quest and their versions of the game may be different. I play on the Insomnia Bytes server (no longer available), which has comparatively few players and a simple version of the game, but other servers have mods which allow you to buy guns, gamble and other developments. You can also host your own server. Check out the options and have fun exploring the possibilities.

Update: Unfortunately, the game can no longer be played reliably. Seth Robinson's company took the game down 'permanently' in October 2008 only to resurrect it again in January 2009. Since then the servers that run the game go down often and remain offline for long periods of time.

"So what do you think?"
"She's got this whole 'Queen Of The Undead' thing going on."
"What about the body?"
"Oh yeah, great body."

GREAT game.
I'm hooked.
My name on it is Lion Nyne :p

Being the son of a funeral director, I thought this was very funny!!

I wish there wasn't a PvP version, since my school blocks PvP content. Any chance of that?

Sorry for double post, but I need to clarify that I meant I wanted a "non-PvP version" not that I didn't want the PvP version.

Apparently one of my customer's sisters got ran over by a computer? :O
Musta been one strange computer, I say.

(in case it's not obvious, this game is not kidsafe).

Maybe you might want to mention also the author of Funeral Quest, Seth has been writing online games before the web even existed. He wrote one of the most popular online games every created for the era prior to the internet or I call the "world wide mess" called "Legend Of The Red Dragon". You can find his original online game on BBSing.com.

Kudos to Seth, he rules in my book!

I'm strangely addicted to this game already, even if I seem to be having trouble getting ahead.

try playing safely at first - don't draw attention to yourself by attacking anyone, don't select the immoral options like keeping the ring on your desk, don't push your luck too much with the customers (at the first appearance of the word "angry", click "Done"!). Change your wooden tags at the bank for gold tags (4 wood = 1 gold) and study PSY at the university. Once you've built up some skills you can go crazy.

I can't figure out how to play, because it says all of the servers are full. :( :( This is my favorite kind of game, too.

What is up with the servers constantly going down. I have tried several times to get on http://www.insomniabytes.com/, but when I select the button for the game it fails.

I finally got going on http://fq.bbsfiles.com:8080/, but my session kept locking and eventually the server went down!

Thanks for the tips!

I think I've got the swing of it now. The only thing I'd like to see is more turns per day. (So far I've only purchased a budget hearse, and that gives a few more.) The turns also seem to vary with the tournaments within the server I'm playing on, so there doesn't seem to be too much of a chance of too many more. Still, it's pretty fun!

Quite addictive, for sure. I spent about 4 hours on it and got a hook from my boss for the missed meeting :)

Also, if you exchange Gold to Silver and back to Gold, do you lose any tags in the process (ex: buying and selling merchandise) or is the exchange rate equal and constant (ex: exchanging a dollar for four quarters and back to a dollar)?

I believe the exchange from silver to gold tags is 2:1.

I've never tried to exchange gold to silver and then back to gold. I was afraid I'd end up losing tags. I'm thinking the exchange rate is probably equal and constant, but I didn't want to risk it.

Fun game...but I must not be keeping track of the server I'm on. It seems that I can't log back in later...is this the case? If you set up a user name and password on one server -- that is the only server it works on?

Very fun game... i tried exchanging gold to silver, then back to gold and you don't lose any tokens. Also if you don't use all of your turns for the one day, do they carry over to the next day, or do you lose them?

Ah, yea... I tried a different way of exchanging tags (selecting a few at a time instead of all at once) and it gives the exchange rate there. 2 wood = 1 silver, 2 silver = 1 gold. And, like money, the exchange works evenly in both directions.

Scooby - An account on one server will only work for that same server. Each server is its own "world" - different hosts, different players and such, and so you have to create a new account on a new server if you want to play there too.

I had to give up on playing this game, because i coul never get in the server the next day to keep playing. When I tried to put in my name and password it read bad name or bas password.
Because of this i created 3 account and started from 0 3 times. I just got tired.

Can't seem to get past the newspaper page to actually play. How do you get out of it? Also, having problems with sizing to my screen...it seems cut off all around. is anyone else having problems like that?

To get past the newspaper page, click on the word continue which is on the bottom right corner. i don't seem to be having the resizing problem.

Speaking as a huge fan of Six Feet Under, I have to say this game kicks serious butt!!!

it seems like going thru events too quickly annoys the server and makes it freeze up.

and I've had trouble logging in the next day too.

Just wanted to let you know that Insomnia Bytes now goes to a domain squatter, you may want to remove the link.

Are you supposed to get 3400+ turns on your first day or did I just hit a lucky bug?

I also am having sizing issues. The game is fun from as far as I got clicking random buttons (after minutes trying to get my mouse in a clickable position) and then memorizing what they do. I still couldn't figure out a lot of what's what. If anyone knows what's up with the screen, please post! Thanks.

I too am having sizing problems! it pisses me off... if you press tab enough times you can get past the newspaper, but when you try to sell people stuff you cant see the other buttons...

Make the window larger? Does that help?

Found out how to get beyond the sizing problem. If you remove all your toolbars and the staus bar you can click continue, you still cant see the soft sell hard sell, etc. buttons, but if you press them anyway, you'll get the hang of it

I used to love playing Funeral Quest a year or more ago. Is it dead now? When I found it on my JIG google thingy I was ecstatic.
There are no active servers though. How disappointing.

Sizing problem: I have this issue on my laptop. Simply hit F11 and it rids the screen of toolbars. Then, when the game is over, hit F11 again.

nice game i played a while ago lost touch of it then forgot about completely its kinda late so ill play tomorrow to see if it has changed much.

Also, great game. Lots of wit and humor (albeit dark).