Real-world warfare is a chaotic and stressful affair that requires stark nerve and split-second reflexes. Luckily, this isn't the real world, so we can take our sweet time and plan every little thing out in between sips of coffee. Giving a new edge to tactical combat, Mode 7's much-lauded PC strategy game Frozen Synapse has landed on iPad, bringing with it all of the beloved action along with some new and intuitive touch controls. 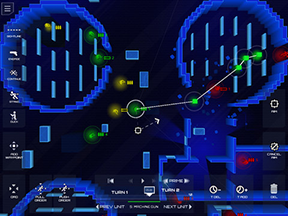 Frozen Synapse puts you in control of a squad of armed troops and gives you the ability to precisely map out their actions and movements. Once you have settled on a game plan, you and your enemy's commands are then played out simultaneously in real time (the game's defining feature) and hopefully the resulting encounter leaves you with more men standing than the other guy.

Each battle is broken into turns which comprise of five seconds of real-time action. During each turn, you plot out your squad's maneuvers for the upcoming five seconds, beginning by setting up a pathway for each member to follow. You can either map out each soldier's route point by point, or choose a destination and let the computer choose the optimum route, tweaking nodes where you see fit by tapping to select and dragging to move. You can add in commands at any point on a squad member's pathway, such as instructing them to focus their aim in a certain direction, engage or disengage with the enemy, stand still, duck or run. Once you feel your scheme is foolproof, hit the Prime button and the game will determine the outcome, which you can then watch, presumably while saying "Oh man, I wasn't expecting him to go there..."

You can choose between the single-player campaign, which plays out as a series of missions set in a near-future world of war and political intrigue, or a quick battle against an AI or online opponent. Your missions generally involve some variation of "kill all the bad guys" (and conveniently, all enemies appear in bright neon red) although the campaign adds a little variety with escort and protection missions and such. To note, all of the maps in Frozen Synapse — even for campaign missions — are algorithmically generated, so no two battles are ever the same.

Analysis: Frozen Synapse turns close-quarters combat into a stylish game of chess with guns. It's a great concept, and it's pulled off with a great deal of polish, giving you a high level of freedom and precision. 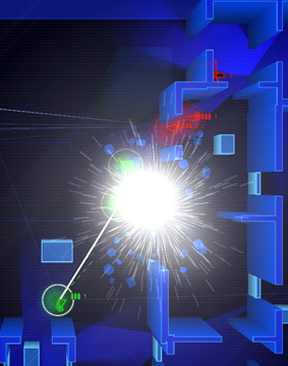 Take note: Gamers who are used to victory through sheer firepower may find themselves at a disadvantage here. The only way to win is to outhink your opponent — to predict their movements and stay one step ahead of them. Of course, this is all keeping in mind that your opponent has the exact same mindset, and both of you can view the entirety of the battlefield at all times. Also, the randomly-generated maps mean that you have to constantly adjust to new scenarios. Do you play defensively with precisely-placed snipers, or do you blow a hole in the wall with a rocket and go in shotguns blazing? As Olmec once said, the choices are yours and yours alone.

There's definitely a learning curve to becoming a master tactician, which may turn off some gamers with less background in strategy games. However, it's a curve worth tackling for the sake of a deep and unique gaming experience, and luckily there are plenty of tutorials. And the pulsing electronic soundtrack and slick neon visuals also make the whole learning experience very appealing. (Although some graphical variety here and there would be nice.)

All in all, this is an excellent title that really feels at home on iOS. The touch controls flow nicely and there seem to be no compromises with re-envisioning the game in tablet form. Of course, if you don't have an iPad, the desktop version is still very much available and as good as ever. And Frozen Synapse's cross-platform play also means that your account and data will transfer between tablet and desktop versions of the game, which is always a welcome feature. There are really few things that can be said against it — it's well-made, inventive and tons of fun. Frozen Synapse an exciting new take on action tactics that shouldn't be missed by fans of strategic gameplay.