Fright Heights is a speed-oriented logic puzzle game created by The REDspace. The goal is to scare all the pesky humans out of your nice, shadowy hotel. You do this by placing various spooks equipped with number grids in each room, overlapping values to produce the desired level of fright. Once the quota has been reached, get ready for some screaming former guests! 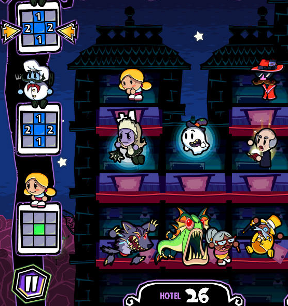 The left side of the screen produces ghosts and humans at random, simply tap to place them in rooms, making careful note of the numbers surrounding each ghost. The number on the right side of the house denotes how many fright points you must accumulate to scare the people on that floor away. To reach that number, make sure a overlapping ghost numbers intersect with enough people. It makes a lot more sense in practice, so the best way to learn everything is just to dive in and start placing. Later in the game you get to unleash special talismans that grant you powerful ghosts, which is as useful as it is fun!

Fright Heights is just a ghost's hair away from being an extremely clever and unique logic puzzle game. It's hard not to look at the IAP system and blame that for pulling it from the mark, but there are a few other features that indicate it's more than just microtransactions. For example, the random distribution of ghosts/people can paint you into a corner once you reach the top floors of a mansion. It's part of the game to experience failure, as it encourages you to plan more efficiently, but in the case of Fright Heights, those failures seem to occur even when you're at the top of your game. This is mitigated with the use of talismans, but then you bump into the IAP quandary again.

The best way to enjoy Fright Heights is to sit back and take things casually. Strategies will form as you play, talismans will become less necessary, and even troublesome floors with missing rooms won't bother you. It's a simple, creative puzzle game with catchy visuals and addictive gameplay that's enjoyable for all types of players.