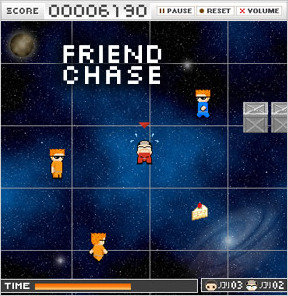 I love and hate this game for the same reason: it reminds me of grade school. In Friend Chase you run around a courtyard using only the mouse for movement and left button to jump. Your goal is always to collect friends by touching other people of the same color, though how many and in what combination differs from level to level. Sometimes you simply collect a certain number, in other levels you have to collect a defined number of two or more different styles of people. Some wear sunglasses, some have beards, others are wearing Lucha Libre masks... get it?

There is of course a time limit for each level, but eating food that is scattered throughout will bump up your remaining time. You can also collect "?" powerups: these seem to usually change what type of person you are or your color, though sometimes touching one will change you being dressed in black. While in black, you can touch anyone in the level without regard to color and gain a new friend, though they immediately start running away from you while you're in that state. It's time limited, so use it wisely while it lasts.

Quick tip: touching people of a different color knocks you flat on your fanny for a second, wasting time. However, touching someone not of your color but of your same style (you both are the bearded guys, say?) changes you to their color. So if you need 15 more friends to end the stage and just can't find anyone of your color around, change colors!

Analysis: The gameplay in Friend Chase is simple and delightful, and it managed to suck me in for quite a while. Each level is unique in its requirements and like a good arcade game manages to step up the difficulty each stage without ever making you feel like you have to achieve the impossible. The sound and music fits the graphics perfectly, which are beautiful throwbacks to the days of shareware. I think one of the little guys is even the spitting image of Duke Nukem.

My only complaint is in how difficult it is to tell the different 'friends' apart in levels where you have to collect a number of a certain style. I realize this may be part of the challenge, but it seems challenging enough just chasing them around, or sometimes even finding enough of one color, without having to squint (at a 19" monitor no less!) to try and figure out if you're chasing the "Bald Guy" or the "Lucha Libre" guy. Right, you can't mix up the Lucha Libre guy with anyone else, but you get my point, right?

I also like that the game manages in its own little way to demonstrate how friendships in grade school often start: you're attracted to those who look similar and repelled by those who look different. Most of us are able to overcome those initial prejudices eventually, and it's a shame the developer couldn't come up with a mechanic to simulate that as well.

Long Load Alert: there is a long Flash advertisement before the game itself loads, and since it's all in Japanese I can't tell you if there's a "skip" button. Just know that unless you speak Japanese not to click on anything until you see the game's main screen. You'll know it when you see it.

Edit: Well hes not really a ninja -- He wears all black and everyone runs from him.

Bwahaha. The message you get when you lose is "time over."

What's this end-of-game message I get?

Thanks Ben, that reminds me how I forgot to ask if anyone could translate some of that end game text.

jesse - Though I don't really think he's a ninja either, why did I not think to at least refer to him as a ninja? Japanese game, wearing all black... sheesh.

I was thinking punk or gothic. Ninja didn't even cross my mind either. =)

Does this game remind anyone of a popular card game???

If UNO had cake, I would play it every day.

yeah, i totally reckon he's emo guy. all the people that he touches don his emo garb and, after the effect wears off, you can see them cowering and clutching at their knees. definitely emo guy.

I just did a quick scan of the review and apologize if I missed this, but you can also touch people who look like you - rather than just of the same color. If you touch someone who is a different color but looks like you, then you change to their color.

I personally think the guy in black is that person that you always seem to have at least one of in a school, the one I like to call the 'rocker', although it may be that other, less likable, person that, again, every school has at least one of, the 'goth' student. I'm prepared to put my money on the 'rocker', because of the way the other people's hair gets electrified into a super cool style, the style I like to call the 'rocker cut', and the fact that if they were goth, they wouldn't be putting their hands in the air like 'Yay, I'm so happy, I have a new friend, let's rock out!', they'd be like 'Oh, no, now I'm goth, I hate life, I'm gonna go cut myself.' So... yeah.

Also, sorry about the double post, but I think that the end text is just about which color and looks you used the most.

Sorry about the triple post, but I also think that it's the rocker because of how the music changes to awesome rockin' music when you turn black. So... yeah... again...

omg! Prejudice against us rockers. :(

I love being the (what I call for now) "spy" because of the awesome music!

Of course there is a skip button! Right after the, right after the... maybe I don't speak japanese as well as i flatter myself to! :) And the game was really confusing at first, I mean for you people who dont speak japanese, because the directions were all in japanese, and so its like, ok, I'll run into you, that sounds good then I'm going and crying and everybody moves away like I'm poisonous and it makes me sad :(

when you are the goth, other goths are attracted to you

Game does not work!

[Thanks for the note, link fixed! -Jay]