Slimes, blobs, and ooze are all wildly popular in the mad scientist circuit. The snarky scientist in Frank'n'Slime, a tricky, stylish puzzle platform game by Alex Kershaw and Enotick, is clearly part of that circuit. He's created a slime-blob-thing that turns out to be smarter than your average slime-blob-thing. You control this blob... can you outwit your creator? Use the [arrow] keys or [WASD] to move, [spacebar] to switch characters, and click on the gravity arrows to activate them. Hitting [R] or clicking the arrow button at the top menu restarts your level. 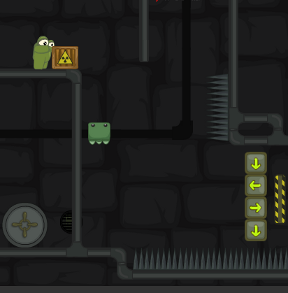 You'll have boxes to push, spikes to avoid, and jumps to make as you work your way to the door at the end of each level. The game is more about the puzzle and less about the platform, as there aren't many difficult jumps. Most levels you can take your time and contemplate the best move before diving in, so don't expect much fast-paced action. While similarities to Qoosh can't be ignored, Frank'n'Slime's gameplay is original enough to stand on its own. A nice feature is the ability to play any level at any time. It's great to be able to skip a level if you get stuck for too long. Unfortunately, the level select menu shows no indication if you've passed a level or not. This is a minor annoyance in an otherwise polished game. The voice acting is well done and funny, and the controls never feel off. Frank'nSlime is difficult enough without being frustrating, so put on your thinking cap and help the slime escape!

I've played a better version of something too similar where the test-subject could teleport and the voice actor was probably the same. I wish I could remember the name...

I think it's Qoosh you're thinking of. I linked it in the review. :)

Well, whatever it was modeled after, it was still a good game!

KMB is just very bad at reading an article to the end. My apologies.