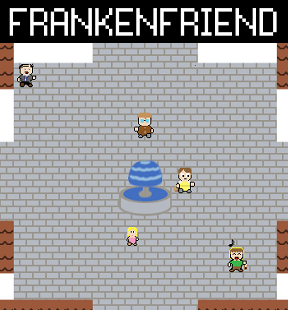 FrankenFriend, the Synapse Firing Squad's RPG/Visual Novel entry in Casual Gameplay Design Competition 9, is the tale of Frank Von Friendenstein IV, a eccentric youth with a passion for the sciences who lives alone in his mountain castle high above the village of Frankenfriendsylvania. Though for years, his education and "unorthodox" experiments have satisfactorily taken the place of social interaction, he's found that, as of late, he's been lonely. So it is with great trepidation that he heads to the village below looking for companionship. Frank just wants somebody to be his friend. Then again, if that fails, he'll be fine with just... some bodies. After all, what is science for, if not to fulfill your maddest desires? Bwah ha! Bwah ha!! BWAHAHAHAHA!!!!

FrankenFriend's genre is hard to classify. One the one hand, a trip through Frankenfriendsylvania feels very much like exploring Narshe, Truce, Onette, or any other classic RPG starting-village, a feeling compounded by the Earthbound-styled graphics. On the other hand, gameplay is conversation and relationship-based in a way more typical of the Visual Novel. Perhaps the best comparison is to a stripped down version of the equally-difficult-to-classify Animal Crossing series of "life simulators". In any case, you'll be doing most of your time walking and talking

The game is divided into two "days" of play. In the first day, you walk around town using the [arrow] keys, interacting with various villagers by hitting the [spacebar] to start a conversation, with the goal of making as many new friends and connections as possible. Each conversation gives you options of things to say: generally one cordial and one snarky. Generally, cordiality will net you more friends, but snarkiness can lead to some pretty hilarious conversations. Watch out though: conversation will deplete your "social stamina" bar, and eventually you'll be overwhelmed and need to head home. The second day, having found the personalities of the citizens lacking for whatever reason, you set out to invite four chosen people to a dinner party. And, by "four chosen people" we mean, "four people chosen for their body parts", if you catch my drift. You'll have to use all your social connections you made on the first day (and engage in more than a little running around) to create the proper guest list. Watch out, though! You only have eight hours until dinner... and Igor doesn't like it when people are late! 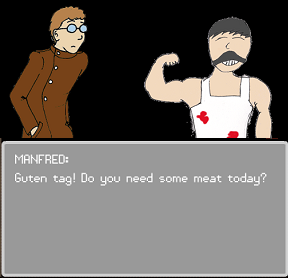 Analysis: I shan't mince words. In my mind, FrankenFriend has the best writing of CGDC 9, and an engaging cast of characters that perfectly embodies the theme of "friends". It also has game-mechanics that are confusing at best and debilitating at worst, coupled with a host of not-entirely resolved glitches. Personally, I think the appeal of the game more than makes up for the technical issues, but there is certainly room for improvement.

First, the good: Frankenfriendsylvania is a wonderful town to visit. The people living there have well-defined personalities and dialogue that, while limited, sparkles with imagination. The in-game profiles show that the developers took quite a bit of consideration in creating their game world. It pays off as, from the boisterous blacksmith, to the motor-mouth town gossip, to the lovable town drunk, FrankenFriend has one of the few competition game casts that I actually wanted to hang out with afterward. Likewise, I found, Frank, the anti-heroic protagonist, hilarious. He's written as a demented combination of mad scientist and awkward high school freshman and it totally works. Yeah, generally I chose his "nice" conversational options, but any game that lets you derail small-talk into conversations about grave-robbing, or blithely inform people of how their chosen profession will be crushed by the march of progress, is all right with me.

On the down side, with such a well-developed setting, I wish that a better game was taking place there. Introducing yourself in the first half is quite amusing, but the second half falls short. Collecting bodies is portrayed as a confusing mesh of fetch quests and arbitrarily timed missions, neither of which I'm too fond of in general. The dialogue is as wonderful as ever, but I spent more time looking for people than talking to them. This got old fast. Compounding this is the number of glitches in the game: invisible walls, restarting music, a note-card styled menu system that needed constant prodding to work... nothing game-breaking, but certainly annoying.

Also I want to talk about the ending, or rather the lack of one. All you get is a short screen of text, which was disappointing. Also, I was disappointed in its singularity. The intro talks about the possibility of redemption, so I was kind of hoping that there would be a chance for Frank to be happy with the connections he made, or at least happily draw the villagers into his mad science. The way it ends now feels a little forced, as if the programmers ran out of time before the competition deadline.

I hope I do not sound too negative, as, overall, I found FrankenFriend quite charming and worthy of its place among CGDC 9's finalists. While it is not a perfect game, it demonstrates that the Synapse Firing Squad has prodigious skill in writing and world-building. With a longer development cycle and further flash experience, I'm sure the quality of their programming will soon match their prose. The SFS blog says there's a FrankenFriend 2 on the way, and, let me tell you, I'll be the first to play it.

Uh, I can't figure out how to

Having played the game myself and run into some annoying bugs, I think I'd settle for FrankenFriend 1.5.

Finish the game you've got out already before working on another one, dammit.

Is it just me, or are the people you need to find the exact people you decided not to talk to? :I

I like the premise, and the graphics are
OK, but I keep getting an error where your Frankenbook (sp?) basically goes crazy. Fix the bugs plase!!

I love all the characters, enough to restart twice through the glitches (ie, the next step in the mission says to talk to Manfred, the Butcher. I get to Manfred, and it says I need to check my Frankenbook.)

I agree on the ending- it's too short. I like the 2 day gameplay set up, but I feel like there should be a third "level," at the dinner party or after. Fun mini game otherwise.

Unfortunately, this game should have never been accepted into the competition, nor reviewed. Despite the authors hard work, it is nowhere near playable. Five times I have played it and five times the game has glitched on me, sometimes telling me to check my Frankenbook while I had two open quests, sometimes freezing after asking an NPC a question, and keeping the dialogue. All the glitches has made the game unplayable because it doesn't react to any keys. Why this game was even accepted into the competition, is beyond me.

I really enjoyed this game, glitches aside. The social networking aspect was really innovative:

the time it took for your acquaintance to find the person you're looking for is proportional to your degree of separation. If your friend knows the "person who makes great tacos" they tell you who it is. Otherwise it takes some time as they ask around. The application is aware of who knows whom in this town, and this affects how successful you are.

Even though the gossip knew everyone, you wasted your time by talking to her because she never became your friend or told you anything useful.

The glitches are unfortunate. Its score in the competition really suffered for that. I really would love to see this game completed and expanded on.

I found the end

to be sad and creepy (as it was intended!). The young mad scientist writes (something like) "I searched the town and didn't find someone suitable, so I must make other arrangements" and so he lures his new friends to the castle, in order to cut them up and piece together a more "complete" companion.

I played several times to see if there were an alternate, more happy ending (I really wanted to like the title character) but I didn't see any clues about how to go about doing that if it's possible.

I've found since the game works to the fact where whoever you meet are not the people you need, it's a good idea to

Rendall has a good point too...

if you know who you need to find (but of course are not friends, since the game is rigged this way) Look at your other friend's profiles to see who they know, so they don't have to ask around.

the dust from the gravedigger.

I had almost everything but ran out of time at the beginning of the "dance commander" quest. Otherwise I had the parts. Dangit.

I didn't find any glitches...