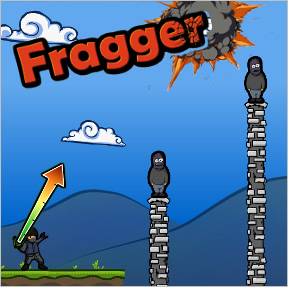 Football? No thanks. Soccer? Yawn! Baseball? So last year! These days, the great outdoors looks a lot more like the boring outdoors. It's about time someone invented a new sport for the kids to play. Something gentle, yet awesome. From Harold Brenes comes the next great outdoor pastime in Fragger, a sweet little puzzle game on a physics engine. With grenades. It's every bit as wholesome and appealing as golf, except you'll actually enjoy yourself, instead of just pretending to.

We're not entirely sure what's going on here, since no story whatsoever makes an appearance. The dopey grin the target wears sort of puts one in mind of the Beagle Boys, so let's just pretend you're trying to keep them from breaking into Scrooge McDuck's moneybin. With extreme force. Each stage consists of a certain number of these no-doubt dastardly baddies, and you need to get rid of all of them to proceed. You have a certain amount of grenades per level, and you can keep track of how many you have left in the upper left of the screen. Run out, and you'll be forced to restart.

Few things can compare to the simple joy of tossing grenades around on a bright summer day, and Fragger makes it easy for you to get into the swing of things by controlling everything with the click of your mouse. Move your cursor up and down to adjust the pitch, and toward or away from yourself to choose the force behind your throw. Once you click the left mouse button, your bow-legged on-screen counterpart will toss his grenade. Grenades only explode after they stop moving, not when they hit something, so you'll want them to land as close to your target as possible. If it looks like it's going to miss, you can tap the [space] bar to instantly make it vanish, but you'll still be minus one grenade. In a pinch, you can also "destroy" enemies by knocking them off screen.

As the levels go on, Fragger keeps things fresh by introducing new items onto the field at a decent rate. You probably won't be surprised by the exploding crates, since they're contractually required to be in every game with the slightest military theme, ever. But some items, like the timed exploding boxes that zip off in a specific direction when hit, are a pleasant surprise. It's just enough to keep you on your toes and thinking. 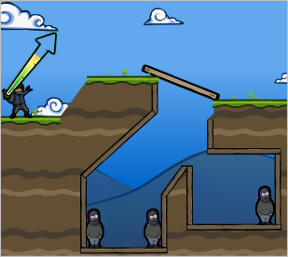 Analysis: Early on the "puzzle" aspect of the game is mostly limited to figuring out just how much force and angle you need to put behind a grenade to tuck it between a goon and a wall on an odd platform. Later, the game surprised me by offering up several stages that resembled Rube Goldberg machines, replete with platforms, tunnels, and walls that had to be approached in a certain order. I honestly wish there had been more of them. Tossing a grenade in the opposite direction of a goon and watching it set off a bizarre chain reaction that still eventually wins the stage is intensely satisfying. The downside is these stages also depend on everything falling just so, and there were times when I had to restart an entire level because a fall of blocks landed at an odd angle and blocked off the area they were supposed to clear.

Still, as big and fun as it is, Fragger is actually never really that difficult. You may have a finite number of grenades, but you can restart a level over and over without any penalty. Just sit back and toss away until you find something that works; this is generally an acceptable strategy for all but the most finicky of stages, which sort of takes a lot of the guesswork out of it. Since the only moves to master here are "throw explodey thing" and "make guy go boom", there's not a lot of necessity to improve your skills. If you hit someone in the head, they'll just topple over like cardboard cutouts, so you never have to deal with the added challenge of a moving target.

With a bright, cartoony design and smooth interface that makes playing a breeze, Fragger is a winner, but not quite a classic. But for an afternoon of exploding fun, you'll be hard pressed to beat it at its own game. Just remember to duck and cover!

A satisfying game. Once you get through the first several levels it becomes a bit more challenging. There have been others in this genre (oddly I was reminded of penguin catapult for the iCraze when I started playing.) Solid addition, don't think it breaks any new ground but good fun.

This game had a bit of a schizophrenic difficulty, while never actually getting that hard. Really, there were only two levels that gave me any trouble. The first being one with a house with two pipes and a chimney. All that came down to was figuring out which order to use each one. And the last one had me troubled for awhile because

Not being allowed to throw more than one grenade, my mind had been trained to think that I had to wait until it was finished to throw my next grenade. It eventually came to me that I could throw the second while the reaction was still taking place

After unlocking the multi-grenade perk after completing the game, I'd be curious to see the implementation of multi-grenade timing-based puzzles. Although I'm thinking that they would be annoyingly difficult.

Never mind. Just got it.

Just beat it on elite, where you only get just enough grenades to do the job.

Open mspaint. Alt-Tab between the windows. When you find the right spot, mark it in paint. Use the pencil for pixel-perfect accuracy. Restart once you have all throws marked, and make your perfect throws!

Played, all the way through on Normal, Hard, and Elite. Ended up with a score of 729,440. Very fun and entertaining.... thanks as always for being the premier casual games site.

This is really excellent! This just proves that you don't have to add lots of weird rules and made-up objects to have a fun physics-based game. For me the consistent physics, complemented perfectly by simple sound effects and pleasant graphics (love the expression on the hapless targets' faces) made this a very enjoyable experience. I'm going back to play hard and expert mode now. More please!

What a well-polished, enjoyable game! I played it through normal, hard and elite in one sitting.

Now that is a top-quality casual game! Unfortunately I've only played through on easy level as the congratulations screen broke my computer :(

I'm not sure why you'd make a congratulations scheme that is more CPU-intensive than the game, but anyway...

Woo hoo! Talk about fun! This is a blast to play! But I'm only playing on Normal and stuck on 27. Any hints?

get the top red crate down to the bottom, then

explode the three red crates which should

reveal a way to get the grenade into the hooded chappy

Okay, finished Hard mode and while I was

watching the fireworks, it wasn't allowing me to "Click Anywhere To Continue," so I just started clicking like a madman. Well, it finally faded and I got a message that "Now I can make grenades explode at will by pressing..." but that's as far as I got before my manic click-frenzy stuffed the buffer and it faded away... :( So what do I press to make the grenades 'splode in mid-air?

I'm in the level 29-normal. I can't touch one enemy. I thought that's impossible because I'm come here. Please help me

wOw (I'm from Spain and I only have 13 years old ; now I think that I speak very good English for my age)

(Yes, very good English, just next time remember you don't need to type in all caps here, thanks! :) -Kyle)

you have to press the "F" key to explode grenades in mid-air.

Wow, just finished Elite after the other two levels and I'm bad enough to save the President, Dude.

And I never even used the F key once. LOL!

I finished it in elite

HA! Finally beat it on elite (with the help of some of these spoilers XD). Final Score: 746696

How do you beat level 29 on normal?

I'm stuck on level 30. Can somebody post a level 30 walkthrough?

Frag goes down the chimney...blows up the two first two levels

the explosion doesn't make it to the third level to finish off the victim!!

can anyone help stuck on L29

How the heck do you do level 17 elite? Please help me.

I need only 1 more achievement to go! it's that gold trophy

Stuck on level 29 on normal. Please can someone help?

Ughhhh. Level 30 on normal is gonna give me an aneurysm. Can I have some help?

Help. Level 40 has me pulling my hair out

Kallie, level 40 is a tricky one. The boxes act as a timer, you have to toss a nade in the lower pipe first, then the upper one before the top box explodes.

Stuck on level 26 in Lost City. I do it like the videos do but I can't get them. What is the trick. Help, please.