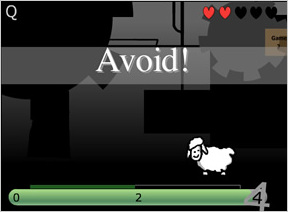 The following is a reader-submitted game review by Scramble125:

Furious is defined as: "Full of activity; energetic or rapid". This next game will probably make you feel a little like a "furious" five year old with a mouth full of sugar.

The game doesn't try to be anything more than that: just a simple, quick Flash game when you have a few minutes to kill. Don't expect it to last long—you only have five lives with which to fail. And once they are gone, you will have to start a new game. This isn't really a problem, however, as you will quickly master the controls (spacebar and arrow keys) and complete the game with ease. And despite the game's simplicity, it was still able to hold my attention. I can definitely see myself putting off work for yet another Four Second Fury again.

Analysis: My only problem with games like this is that sometimes they are not as fast-paced as they set out to be. However, with Four Second Fury this is not the case. It's perfect for burning off a sugar rush.

Like I said, I loved it. It doesn't really require any more in-depth analysis. Run, catch, dodge, and defeat the final "boss" as he hurls previous mini-games at you (you'll understand when you play it). Relax and enjoy it.

The music certainly adds to the atmosphere of the game (techno anyone?). Although it is almost certainly run on a loop, the game is so fast that you hardly notice. This can hardly be said for other games much like this.

Fast and furious and great for a rainy afternoon, Four Second Fury is sure to entertain you... for about 2 minutes. And that's exactly what it sets out to do.

Check out the entire Four Second series of games.

Cheers also to Talps, Mike, Zengief, and Andrew for suggesting this game.

Oooo, very nice. I've played it a few times a while back... And theres a really awesome game I'd like to see on JIG, too. Super Monkey Poop Fight. Look it up <3

This game is old, yet a fun kind of warioware based game!

Thanks for putting this up here jay!

Yes, I know it's not the newest game, and yet Scramble had sent this review in ages ago and it got overlooked, unfortunately (sorry, Scramble!). Now, with a sequel out and a forthcoming review of that one, too, I wanted to get Scramble's review up, finally.

Awesome! I can't figure out the soda can one though

OK, last time that I brought this up, people criticized me for saying things I didn't say, so I'll try to be clearer this time...

I don't care that Flash 8 games are here, I wouldn't expect game developers to use anything but the latest version of their tools. I don't much care that my Linux box can't play them, I realize that by using Linux as my OS I'm going to miss some things.

But please don't tag games (like this one) as "linux" if they require flash 8, because they don't work on linux. Yes, Wine can often run them, but that's not really running it under linux...plus the performance is terrible so most games are pretty unplayable that way anyway. It's really frustrating to see a fun game, follow the link (since it says that my OS works with the game), wait for it to load...only to get a broken game that doesn't play.

(Note: I'm assuming that this game is broken on my system due to me having only flash 7. I click the link, get just a blank white box after it's done loading. If there is something else going on, then please tell me what it is, and accept my apologies.)

Sorry, Bill. Hopefully Adobe will address your concerns with a Flash Player release for Linux soon, and then all the tags on this site will be accurate.

Flash is supposed to function across all 3 platforms, and I expect the present unfortunate situation to be only temporary. That is why the tags reflect what they do.

In other words, soon it will all work itself out and I won't have to go back through updating tags all over the place that I would otherwise rather not have to do.

Shame on you for not mentioning WarioWare in the review! :P

Great site, though - I'm not quite a long-time reader but I do enjoy checking back every day, just the same!

I didn't it was beatable until I got to the boss.

Well I've finished both the games a while ago.

They're fun, but I can finish the game in one life now, so I'm done with it.

Gotta love these 4 second furies. I had only played the sequel on NG (not knowing it was the sequel.) A load of fun in tiny doses!

Turns out, I didn't die.

As to Flash-in-linux -- sure, you can play flash games in linux, if you have an x86 machine. If you're trying to get flash on, say, a PPC machine running linux, you are SOL.

I've got all of them down and the boss exept for the game with the carrot and the guy.

Does anyone know who does the song on the main menu to the game. Not the neverending story song.

DO NOT PLAY THIS GAME IF YOU HAVE RUBBISH REACTIONS.
YOU WILL LOSE!

josh, (although that`s my best friend`s name) you are totally W-R-O-N-G!!!!
I had the boss to 1 health for goodness sake!

This game is so funny. I love introducing people to it without explaining it just to see their reactions.

Yeah! I finally beat it!

Well, I was going to suggest this one for the vault, but it seems to not be there anymore.

The URL has changed.

[Thanks. Updated all the Four-second reviews. -Jay]