Forget threes. Threes stink. Good things come in fours in Benjamin Soule's turn-based roguelike game Four Scepters. Created for Ludum Dare's minimalism theme, it's all about four heroes (see, way better than three already) out to gather the four magic scepters needed to bring down the Big Bad. The catch is, you can only play as one hero at a time, and each has their own strengths and weaknesses, and when one dies, they're gone for good. As a result, the game becomes a lot more puzzle-like than RPG, forcing you to think carefully about every movement and weigh risk versus reward to make sure you're able to reach the scepter in each dungeon and win the game. 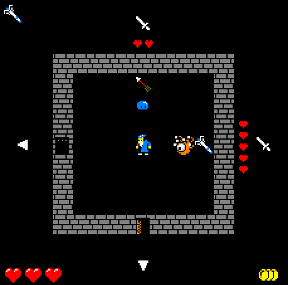 Move with the [arrow] keys and bump into things to pick them up, attack them, or go through doors. As you explore, you can find different items to help, such as keys to unlock doors, potions to restore health, and even some things that can only be used by certain heroes, such as the wizard's powerful scrolls. (Note that items must be used in the order you picked them up.) Your enemy's health is represented by the hearts next to them, as yours is by the hearts at the bottom of the screen. To the right are any coins you carry, which can be spent on items from merchants, and gained one for every slain enemy. If you die, you'll have to pick a new hero, though they'll be able to continue in the same dungeon you left off in with all your progress. Don't be fooled, though. As simple as it may look, Four Scepters actually does offer a remarkable amount of strategy. You just have to pay attention to the special attributes of each monster and think how your remaining characters and items would best work against them, and in what order.

If it sounds challenging, well... it is. Since every playthrough is different, there's no way to plan ahead with your first hero, so it often feels like you're going to lose someone almost right off the bat no matter what. It's not a game you can just bulldoze through, and that unforgiving demand for strategy or death won't appeal to everyone. It is, however, a great example of how clever and challenging a game with the "bare minimum" can be. Providing your definition of "great" is "getting slapped down mere feet from success and forced to start all over again because SNAKES ARE DUMB AND I HATE THEM."

A really challenging game, but I think I'm onto the right path.

Noting the colour of the scepers as you collect them, perhaps that's the correct order to use the characters. It's been working for me so far as I can clear dungeon 1 and most of 2 with the Wizard and get most way to the 4th with the Assassin.

Are all playthroughs different? I've been playing casual mode, and the same set of four dungeons keeps repeating. (I haven't beat all four yet, though.)

So far, brilliant puzzle game. It starts out looking like an RPG that you just hack and slash your way through, but after a couple deaths it's apparent you need to look around before considering the next move.

It looks like there are four set levels, rather than randomly generated ones. (You can access each individually using the custom command). This is even more fantastic, since it means the game is entirely puzzle-based.

On the custom menu, each character lights up when you beat the level with them. This means every level is beatable with every character, though some combinations may be easier than others.

ran into a glitch on the 3rd level or so.

Managed to get my assassin (final char) left, trapped in a room unable to escape.

was annoying. with no 'kill me' button etc

It's such a shame that thief's power makes no sense. It's really rather useful.

What doesn't make sense about being able to pick locks?

If these are set levels, why is there not yet a Walkthrough?

How it can be used. I had to use it three rooms before the item I wanted to steal, there's no explanation as to how it works.

@roy
I'll start working on one

This walkthrough is currently only for puzzle mode, I'll complete it later(as soon as I figure it out).
Level 0:

i know at least of 'casual' mode
the wizard can solo lvl 0, as can the fighter easily.

its level 1 that keeps messing me over.

For those who want one, I've crudely pasted together a map of all the levels. Unless there's more doors that are only locked from one side, I think it's accurate.

I've also noted that some Necromancers aren't what they appear. Aside from the one guarding the scepter, they all only have one heart despite what's shown. I'm not sure if this is intentional or not.

Yeah, those necromancers are illusions. They're health is actually too high to be killed by any normal means, as to stop you from attacking them.

repairmanman, I had figured that was the case; I certainly avoided messing with them until I read your walkthrough, heh.

I've managed to stumble through the game both on casual and puzzle mode and have completed every level with every character... except for Level 0 with the Assassin. For the life of me I can't figure out a solution for it. The best I've managed is bringing the scepter guardian down to one heart before he pummels me to death. I give my sincere congratulations to anyone who is successful with this level as the Assassin.

The wizard is powerful:

He can solo every level, ending each with full health.

So far I haven't been able to solo level 0 with the assassin. It may be impossible.

There's a few different ways I've done it (since I'm terribly inconsistent), but it ultimately comes down to ignoring the sword orc and opting not to unlock the room with the apple in it. This leaves you enough health to be at full when you enter the final room, but there's nothing left to replenish any hearts.

Head to the room to the right. Beat up the slime.
Head down and buy the apple. Take it.
Go up and kill the skeleton.
Head up and to the right.
Kill the thief first, then the skeleton. Loot everything.
Head back down to the sword orc room and purchase the arrow.
Return to the starting room and unlock the door.
Go up. Defeat the zombie.
Head right and take the only remaining apple.
Swing around and face the scepter guardian.
Get dead.

Somehow there has to be a way to enter the final room with the sword and at least two hearts. I can do one but not the other in one playthrough; I'd be miffed if this turned out impossible.

I did some calculations, and level 0 is indeed impossible with the assassin (weigh the amount of damage you need to endure against your starting health and the available amount of healing, you're always at least one off). If the slime had been a rat, it'd have worked, though.