One of the fastest-growing genres in casual gameplay are hidden object games such as Mystery Case Files and the Hidden Expedition series. Fortunately not all developers are content to copy the same idea, place it in a new setting and throw in a few new items. Forgotten Riddles: The Mayan Princess is one such game, combining an intriguing storyline with dozens of riddles that must be solved in order to learn which items you're supposed to locate. 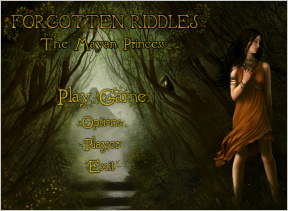 The story in Forgotten Riddles is, unlike most hidden object games, actually quite interesting. You are an archaeologist with a deep knowledge of Mayan culture investigating the demise of the last known Mayan family. A number of artifacts have been discovered that date over 20 years after the family's supposed death. Solve riddles surrounding the artifacts to uncover the princesses' hidden journal pages and reveal the mystery behind the family's disappearance.

Gameplay is much like other hidden object games where you're presented with a scene crowded with items and must locate a handful of objects within. The key difference is that instead of a massive list of things to find, you must solve a series of riddles to learn what you're supposed to look for. Each rune at the bottom of the screen hides a riddle that points to an object on the screen. For example, one riddle reads "Away from the water where his cousins would be, this tiny green fellow may live in a tree.". The answer is, of course, a green tree frog, and as soon as you realize this you can start hunting for the elusive little guy. Switching back and forth from item hunting to riddle solving keeps the game from going stale. And your eyes will be eternally grateful. 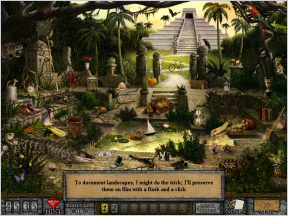 The mini-games you'll solve between certain levels are also intriguing, especially the glyph puzzle. You're given a set of pictures beside a grid on top of a darkened image. Select a glyph and read the riddle to learn where to place it on the picture, almost like a reverse of the main game. Another thing that sets Forgotten Riddles apart from the pack is the inclusion of two difficulty levels. Normal mode (called Archaeologist) is the usual fare, but Apprentice gives you extra hints and extra time for a much more relaxed experience. No pressure, just riddle solving and item finding at your leisure.

Analysis: The hidden object genre is growing at a rapid pace, making it increasingly difficult to find games that deliver something unique. Forgotten Riddles stands a shoulder above your average game with a better story and a much stronger emphasis on puzzle solving. Riddles are never very difficult, so even if you don't consider yourself very clever you'll still be able to decipher them.

Forgotten Riddles: The Mayan Princess does what many item-hunting games fail to do: deliver a pressure-free gaming experience that still manages to hold your attention. It may be an average item-hunting game at its core, but there's a distinctly original feeling embedded on its surface.

Forgotten Riddles: The Mayan Princess is available to download from these affiliates:

Some beautiful charcoal/pencil drawings in this. Soothing music, "deep" narrative and unchallenging gameplay. I love braindead games like this - the movie/book alternative with a mouse.

You're right about the "hidden objects" games. I'm all over them. I haven't enjoyed stuff like this since I was a kid poring over Highlight magazines in the dentists' waiting room.

I remember those days Corona. Loved the Highlights.

This is the BEST hidden object game I've EVER PLAYED!!!!

Any word on an OSX compatable version?