Joy's been feeling lost and out of place her whole life, as if she missed out on a destiny she was somehow meant for. It doesn't help that she's been dreaming about a place so wonderful it leaves her in tears to be forced to wake up from it. When she finds evidence that her dreamworld might not be just a fantasy after all, she heads out in search of it, desperate to find out if she's crazy, or if there really is something greater going on. Forgotten Places: Lost Circus is a hidden-object adventure game from Sun Gift Games that makes for a fun and involving tale, despite having a strict progression. 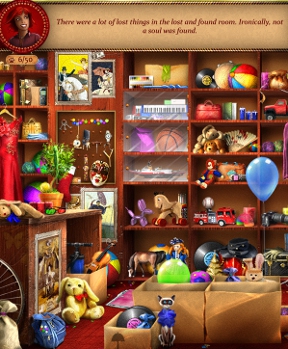 As Joy, you'll explore both the dreamworld of her memories and the dilapidated ruin of a circus that she thinks is the place she's been visiting while she sleeps. If a portion of the screen glows faintly when you pass your cursor over it, it means you can click for a closer look. Certain hidden-object scenes will also have areas you'll have to search tucked away within them. If it seems like your clicks aren't registering properly, remember that because of the odd shape of the game's custom cursor, you want to make sure the tip-top of the cursor is directly on top of the item before you click. Remember that when the gold star in the upper-left corner is filled, you can click it for a hint, or to skip whatever puzzle you're on.

It is also important to note that the game does not save your progress unless you manually close it via the in-game menu. Yes, this is experience speaking for your own good. Furious, hair-pulling, "I can't believe I have to find all those things again" experience. Welcome to the wonderful world of gaming journalism, cherished reader. Don't mind the expletives; we're just your humble servants. 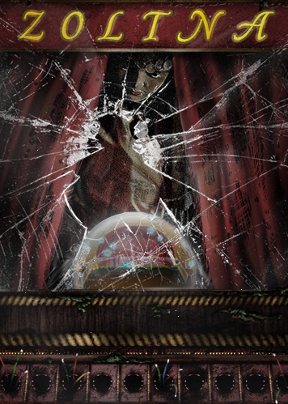 Analysis: Forgotten Places: Lost Circus is kind of a creepy game, even if it isn't a horror title. It isn't just because of its setting... it's more that it manages to capture that sense of wonderment and vague unease that seems to pervade a lot of dreams. While the sketchy art style can occasionally make object hunting difficult, it creates a wonderful atmosphere aided by a moody soundtrack and a genuinely interesting (if a little childlike) story. As far as difficulty goes, Lost Circus actually represents a comfortable challenge; while the minigames and puzzles are admittedly pretty straightforward, most of the hidden-object scenes will require you to be fairly eagle-eyed in your search.

The downside to this is that it's all extremely rigid. It's a lot like going on a cruise with a strict agenda; you're taken to a bunch of different places and told to do a bunch of different things, and while you may enjoy it all, you don't really have any say in what happens. Personally, I have no real problem with linearity; Lost Circus has a story it wants to tell, and it tells it well. But some fans of adventure games may feel uncomfortable at the rails the game locks you onto, and admittedly it would have been nice to explore both worlds a little more at your own pace.

You might wind up wishing there were a few less hidden-object sequences and a bit more story, if only because it feels a little unbalanced, and it would have given the story more chance to shine. I wanted to know more about Joy, and to have her be more of a forceful personality I could identify with. Forgotten Places: Lost Circus is a sweet, well-intentioned game that is a welcome change from the hordes of "EPIC QUEST TO SAVE THE WORLD"-type stories that clog the market. You can expect to spend several hours on it, and while you might wish it were longer, you'll enjoy the time you spend in both the worlds Joy inhabits.

I have got to agree with the author - it is rigid but also somewhat compelling and yes, it does not save your progress (wish I had read this review prior to exiting it!!). Also sometimes the instructions are not entirely clear resulting in a lot of inane clicking of the cursor (and cursing by the clicker too!)
For instance I am now stuck trying to get out of the arena where the cannon is!
Oh well - if at first you dont succeed!!
Debbie (UK)

Well it's available for Mac now - will anyone ever find this ? I hope so, because I love this game so much I'd like to do its walkthrough - the only trouble is I (really) am terrible at puzzles, and still need help from someone who's finished it all. I'm great at the HOS, etc., and getting good screenshots, just still can't nail all the puzzles on my second time through.

Seriously if anyone finds this and wants to help, just with the ^&*() puzzles (have cheated on them forever, just not a puzzle person) I'll do the writing and everything else for a walkthrough.