In Psychoz Interactive's classic-styled survival horror adventure Forgotten Memories: Alternate Realities, the first in a planned series of self-contained yet interconnected stories, Rose's search for a missing girl named Eden took her to an abandoned asylum, but the last thing she can remember is a man pointing a gun at her. When she wakes up, she finds an unlikely ally in the form of Noah, a strange girl who keeps company with mannequins and only ever communicates by recordings even when she's right in front of you, and Rose must explore the asylum to learn the truth about where the missing girl is, and what happened long ago. A limited and very restrictive save system as well as clunky combat mean it isn't entirely smooth sailing, but a fantastically creepy setting with stunning visuals and otherworldly, surreal imagery makes Forgotten Memories: Alternate Realities a fantastic alternative to games that go for gore and violence in abundance. 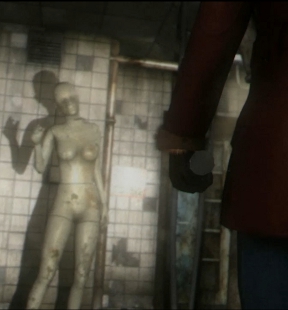 Playing Forgotten Memories is relatively simple... drag your finger around the left side of the screen to move, and look around by doing the same on the right. Tap the exclamation point that appears at the bottom of the screen to interact with something, and tap the targeting icon to ready your weapon. There's no auto-aiming, so you'll need to make sure Rose is facing whatever she wants to attack by moving her and her view as usual, then tapping the screen to use her weapon. Just remember the game isn't paused when you open your inventory! Rose's flashlight can be turned on and off by tapping its icon, which will slowly deplete as its battery is consumed while turned on, but you can recharge it at any of the charging stations you see throughout the game. You need floppy discs (ask your parents, children) to save at computers, and they're in limited supply, like most of the ammunition and healing items strewn throughout the game.

Forgotten Memories compares itself to the likes of Silent Hill 2, though it pays homage and makes reference to everything from Resident Evil to Deadly Premonition. It's very heavily dramatic and often completely mystifying, as Rose comes across a warm apple pie sitting in a cellblock full of mannequins, and simply accepts that the short-shorts wearing girl lounging in front of her in heels only communicates via recordings. The story is sort of what you might get if you had Mo Hayder write it after making her watch a bunch of Let's Plays for F.E.A.R., Galerians, and, yes, Silent Hill, though not as emotionally compelling as the latter. Rose as a protagonist just doesn't have enough character to make you really care about her or the kid she's looking for, but her circumstances are intriguing, and It's weird, but in a very compelling way, and a welcome departure from more recent horror games that feel compelled to slop gore everywhere. It's eerie and unsettling in all the right ways, making you constantly want to check over Rose's shoulder and dreading the moment you have to, though it's never really shocking so much as it all is morbidly fascinating. With a little more character development for Rose, a few more believable reactions to the unbelievable things she sees, she would be a much more solid heroine for the plot. 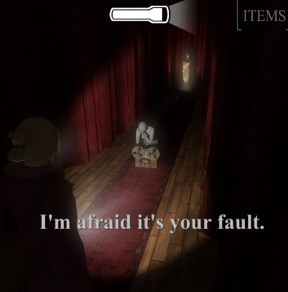 While the controls are simple, they're unfortunately also sluggish, making maneuvering and turning around quickly an awkward affair, and combat even more so. When you see an enemy tottering towards you, you should feel dread, not urgh, which happened to me when enemies spawned in twice while I was trying to solve a puzzle. With the limited save functionality and how far apart save points are, it's easy to lose a lot of progress when you die, and coupled with the lack of a map to find your way around, not to mention the pitch blackness if your flashlight runs out in most areas, makes the game more frustrating at times than "hard core". Child, I will play through Resident Evil 2 from beginning to end without saving once, don't you talk to me about hardcore. Even Silent Hill had a map, and a very useful one at that, with its scribbles to indicate blocked doors or passages that would fit perfectly with Forgotten Memories. The developers set out to create a very specific sort of game, one that appeals to a particular group of players, and they should be applauded for it as much as it comes with the caveat that it won't be for everyone.

It feels like the game would have been stronger overall as an adventure game by omitting even the combat entirely... exploring the asylum and coming across the posed mannequins is downright disturbing, and some of the puzzles are quite cleverly implemented. Maybe most importantly, however, is that it does capture that authentic and elusive classic survival horror feel. I played this on my back porch in the sunshine and still felt like I was fourteen years old, playing the original Silent Hill in my pajamas in the dark, propped up against my bed in my room with the only light the glow of the television. The game is gorgeous and easily would be a fit for a Playstation 2 era console, running like silk on the iPad Air even with all the graphics turned up. Animation is smooth and fluid, and shadows and light are used to add excellent tension, with a wonderfully ambient, discordant soundtrack tying it all together. It's clear Forgotten Memories: Alternate Realities comes from a team of developers as passionate about the survival horror genre as the players they're trying to reach, and the end result is a creepy cool game that is a credit to its heritage. While it still feels a little rough around the edges in some areas, if you don't mind a very old school challenge that eschews modern gaming conveniences like auto-saves and maps, this is a game well worth picking up for the several hours it'll take you to run through, and here's hoping future installments are even bigger and better.