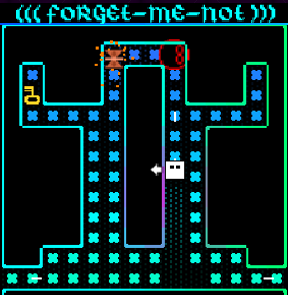 In the mood for some good, old-fashioned, retro arcade fun without the need of a roll of quarters? Brandon Williamson's Forget-Me-Not, which was originally a popular mobile game, is now ported over to your browser! It takes the classic concept of Pac-Man, and adds a shooter to it.

Your little hero needs to find the exit on each increasingly difficult level, and in order to do that, you use the [WASD] or the [arrow] keys to navigate yourself towards the key, which will drag behind you when you get it. Collect all of the flowers, while enemies spawn randomly around each maze. If you can get enough shots into an enemy and kill them, then they will convert themselves into a cluster of food that you can chomp up for extra points. Additionally, you should be aware that your own bullets can hurt you, so be careful when using the lateral and vertical tunnels that take you from one side of the screen to the opposite, and try not to shoot yourself in the back. You've only got a finite amount of lives on hand, after which point you'll have to start all over, so caution is advised.

Strategically, you will want to attempt to collect as many flowers as possible in an unbroken string, in order to maximize your score. You can also "grind" against the wall in order to charge you up, increase the speed of your firing rate, and speed up your hero. Use the appropriate [arrow] key which is opposite one of the walls you are cruising down. In other words, if the wall is on your right, hold down the [left] arrow key. When you start to flash silver, you are fully charged, and you can then run right through your enemies and crush them. Be careful not to over charge yourself when your icon flashes red, because your hero will explode! There's also a huge ghost which will randomly appear on the screen. Avoid it, because it can instantly kill you, and put you in a tiny pixellated grave.

If you've ever thought to yourself that a game like Pac-Man could be conceptually improved with bullets, then this is your lucky day! Quickly addictive, and perfectly frustrating, Forget-Me-Not is old-school fun at its finest.

oh, I am so glad this did not exist in 1984. I would have spent every last quarter of my allowance AND my babysitting money.