Originally developed by Kepuli Games for the 7 Day FPS Challenge, then polished up to win 2nd in the Assembly GameDev Competition, Force: Leashed is a first-person gravity-based physics puzzle game. It combines the structure of the Quake engine with the mechanics of Auditorium and the overall design sense of Portal (if GLaDOS never spoke and handed out gravity guns). And despite the title, Jar Jar doesn't show up once. That's gotta be worth half a point right there. 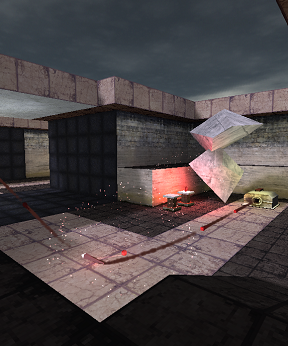 The goal in each level of Force: Leashed is to manipulate streams of constantly firing rockets into specified targets. You do this by picking up and placing colored crystals which serve as gravity-modifying attractors. Because in the land of gaming, crystals can do everything! Move with the [WASD] or [arrow] keys, and look around by directing the mouse. While carrying a crystal, right clicking will adjust its placement height, while the mouse wheel will adjust its distance from you. Crystals only affect rockets of the same color (except white ones which affect all), and later levels will feature "winds" and other elements which will similarly affect the rockets' trajectory. It will often be necessary to "bounce" these rockets off of color-changing walls. Don't expect a lucky shot to get you by: activating a target requires a stream of consecutive hits, denoted by the advancement of lights at the top. And it's incredibly satisfying to light those things.

The developers describe Force: Leashed as a "gravity fiddler", and that's a pretty accurate description. Certainly, anyone who has played a 2D gravity puzzler knows the equal joy and frustration of moving objects just a tiny bit at a time, eventually leading to the moment where it all spectacularly goes right. Let me tell you though, in three dimensions, it's all the more thrilling to see all the rockets and wells and trajectories swirling around your perspective. There's a real sandbox quality to physics puzzles that really becomes apparent when depth is added to the equation. At 11 levels, Force: Leashed is fairly short, and its sparsely grungy visual and audio design not nearly as pretty as Auditorium's, but it's an impressive technical achievement and, more importantly, a whole lot of brain teasing fun.

I'd really like to play this but am having great difficulty making the Linux version run. It starts ok but doesn't seem to find any of the game data and displays a small white dot and nothing else for both available start levels. Playing around with the command line options for basedir hasn't helped.

Every time I try to run the game, my computer says that darkplaces has stoped working. Anyone knoe why, im using windows version.