Please note that this game received a rating or R due to intense graphic violence and mature themes.

When you hear the word "demonforge", it doesn't exactly conjure up images of kittens and rainbows. No, it's rather something along the lines of a legendary swordsmith who sacrifices his own children in order to make the most powerful weapons the world has ever known. And, lucky you, you get to wield one of those hellish things! In Forbidden Arms, the impressive action arcade game by GodSeeD Studios, you will murder throngs of skilled assassins on your way to bloody greatness. With three areas, an endless array of enemies and lots of delicious upgrades, this is going to be one awesome journey to the dark side. 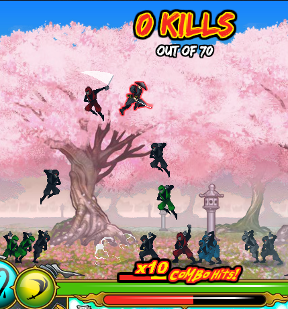 Each of the areas has ten missions, ending with a boss level. There are three mission types, so your goals vary, but they always include killing, killing and more killing. This might seem a bit exaggerated and/or repetitive at first, when it's just you and your sword, but as you progress, you'll learn new moves and abilities, bringing a healthy dose of variety into the gameplay. Another interesting element is the Bloodlust Pool, which is replenished when you bathe in your enemies' blood (literally!) and spent by executing special moves. In addition to blood, you'll collect souls in order to purchase upgrades. Almost anything can be upgraded, usually in several different ways, so you can tailor your gameplay and focus on what works best, or just go for what sounds fun. Do I want to be able to suspend myself in the air while kicking assassin butt? Why, yes, please, here's my money! Speaking of fun, there are three difficulty modes which you can change whenever you like, so the game can be anything from a bit of hack & slash entertainment to a serious challenge, from one level to the next.

If you happen to have played The Legend of Kage on NES, Forbidden Arms will give you nice little flashbacks, from the similar forest backgrounds to the design of the shuriken-throwing ninjas. For a game that's all about murderous rampaging, it certainly is eye-catching, and it's a joy to watch the protagonist carry out his special moves. The gore can be a tad jarring at first, but it becomes a lot more appropriate if you imagine you're Uma Thurman in Kill Bill. The gameplay is relatively repetitive but, between the different mission types and the frequent introduction of new abilities, it feels fast-paced and exciting. The only weak point might be the story, which is somewhat confusing; luckily, it is mainly there to set the mood and doesn't take anything away from the overall experience. So even if you aren't a fan of mindless slashing through numerous ninjas, you might want to give Forbidden Arms a try. It is a polished, well thought-out effort, as addictive as it is bloodthirsty.

I enjoyed this one for a bit, but the attacks being on the mouse and going towards the side the mouse cursor was on began to get annoying. And once I unlocked the endless stage and wasted quite awhile killing things only to find out I didn't get to keep those soul points (the currency for the game) I got disillusioned and gave up on it.