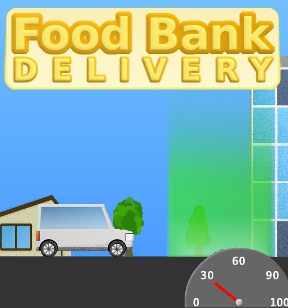 Food Bank Delivery is the winner of the 2011 Stanford Hackathon, where the challenge was to create a game that embodied the theme of benevolence in some way within three weeks, with a set of sweet prizes that included a review on a certain casual gaming site. In JacobG's simple arcade entry, you're driving a vehicle making pick-ups and deliveries for your local food bank, earning cash at each stop that you can use to upgrade your speed, acceleration, braking, and so forth. Start moving with the right [arrow] key, and throw on the brakes with the left [arrow], trying to stop in as many green-lit areas as you can before time runs out. As you might have guessed, the game is pretty straightforward. But instead of just putting on our elitist hats and looking down our noses at what is actually a solid if unremarkable example of a relatively new developer getting his feet wet and expanding his skillset, let's instead talk about what's done right, and what needs improving. Awwwww yeah, it's time to get constructive up in here!

The game is pretty simplistic as you might expect, but that's hardly a bad thing, and to be perfectly frank, I have difficulty playing a game in its entirety in three weeks (I'm slow, okay?!), let alone making one in those time restraints. Food Bank Delivery might not have a lot of bells and whistles, but it at least runs smoothly and executes its core concept quite nicely. I might liked to have seen the upgrades have more of an impact on gameplay beyond simply improving the bare-bones basic functions of your vehicle, preferably by introducing new elements and abilities that gave you an incentive to keep playing beyond seeing your score number creep up. As it stands, the lack of any real goal or defined ending is a bit of a disappointment because the experience winds up feeling unfinished and lacking in purpose.

More than anything, it would have been nice to see the contest theme of "benevolence" represented a little more strongly. Despite the name of the game, all you really have is the reassurance that you are in fact making a delivery of food and not picking up orphans at each stop to toil in the salt mines. One of the simplest ways to communicate this would have been through visuals, perhaps making the look and feel of the car more distinctive, or having it stop at families rather than buildings... something that would have made it feel more like the content its name suggests and less "Unmarked Van Stop-n-Go on Abandoned Street".

But for all that, JacobG has managed to create something a lot of people haven't; a simple but fully functional game, and one with a working upgrade system to boot. It's a series of steps that might seem easy to you if the only thing you've ever done is play games, but anyone who has ever cracked open any sort of toolset or program to actually make one knows just how much effort and learning is involved in really turning out a finished product. While JacobG might have a ways to go, Food Bank Delivery definitely proves he's on the right track, and we look forward to seeing just how big and awesome his talent develops in the future. Development, ho!

Too bad this competition wasn't around last year, while I was still in school there! Congrats Jacob.

[ Also, great review per usual Dora. Concise, entertaining, and insightful, though I would suggest the spelling of "Stanford", not "Standford" in the first sentence :) ]

A bit too simplistic for my taste.:)

Funny.. nothing happens when I stop in the green lights.

Simplistic upgrade systems like this have no purpose but to extend playtime past interest. In this case, all it does is put a time investment requirement on eligibility for the high score list.

Stopping in the green lit areas does nothing for me. I am unable to procede with the game whatsoever.

I know there wasn't a lot of time for the developers to perfect the game, but it would have been nice to have some clarity about how much of the car has to be in the green area for the delivery to count, and make sure that it's standard. It got frustrating very quickly when I wouldn't get points for a delivery I was sure I'd made with the car in the same position seconds earlier.

While I didn't test it for sure, I thought you just needed to be stopped with your wheels inside the green area for it to count.

I was all ready to criticise this game until I properly read the review... (Yes, I tend to click first, think later. Or l8orz. Whatever the kids say these days.)

I was going to make some joke about falling asleep and if the creator wanted to show their true benevolence they would have made an interesting game.

But to create a game with clean graphics, smooth physics, no bugs or glitches and have an enticing base on which to expand... all in three weeks, well, I take my hat of to JacobG.

Excuse me will you?!? I'm just going to go out and collect food for the homeless...

I liked it okay near the beginning, but stopping in the green lights was hard for me for some reason.

I'm kind of jealous of all you people that get to actually play the game. I just get a big white rectangle where a game should be, and a greyed-out "Movie Not Loaded" when I right-click. Tried it in Chrome, Firefox, IE, uninstalled and reinstalled Flash a few times, same results. Loads fine on my phone, but the phone's not sophisticated enough to play it. Rats!

[It has to be your Flash Player. The game is loading just fine for me in Chrome, IE, Firefox and every other browser I test. Sorry. :( -Jay]

For everyone having problems stopping in the green lights, I found that it didn't count for me unless both wheels were within the green column. There seems to be a small window of success. (That's not a criticism, just the way it was apparently designed.)

If that doesn't help, I'M SORRY, OKAY? I CAN'T BE EVERYTHING TO EVERYONE. STOP PUTTING ME ON A PEDESTAL.