In AtlasAtrium's free indie horror adventure Follow the Darkness, Rina's got a problem. I mean, more that she just woke up from a coma and can't remember anything that's happened in the last month. She's begun seeing a girl following her wearing a fox mask, a girl nobody else can see who vanishes at will, and according to local legend, Rina's running out of time. Because she's been targeted by the Fox, who will follow Rina for seven days and then kill her... unless Rina can atone for a great sin she's committed, which is sort of hard to do when you have no memory of what you might have done. But hey, at least she has seven days to figure out... what? What's that? This game starts on day four? That's it, I call shenanigans. But Rina's got no time for that, and there's something else she hasn't considered... just because she doesn't remember what she did, doesn't mean nobody else does, and she might not be able to trust everyone she meets, making the Fox only one potential threat. To play, use the [arrow] keys to move, [spacebar] to interact, and [ESC] to open the menu to view your notes and journal or items, or save your game. You can hold left [shift] to run, but doing so depletes your stamina, which regenerates slowly over time. Taking damage depletes your health, which also regenerates or can be recovered using certain items, but four hits and it's a big fat game over for Rina. Conserve stamina, move quickly, and save frequently and in different slots. 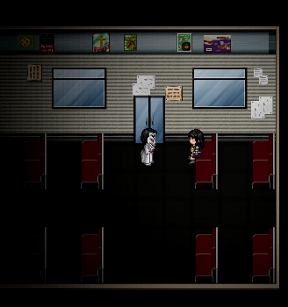 It's a little disappointing that the game starts four days into the Fox's curse, since it means we lose out on what would have been a lot of fantastic character building and tense moments... Rina realizing she's lost an entire month, discovering she's stalked by something nobody else can see, finding out she's on a time limit for a sin she can't remember... that's all powerful, fantastic stuff for a horror setting, and I wish we'd seen it instead of the heavy infodump at the beginning. Despite how rushed the setup is, however, Follow the Darkness is still a remarkably punchy little mystery thriller that's very well put together. Areas are beautifully detailed in a way a lot of RPGMaker horror games don't usually bother to be, and the atmosphere is top notch thanks to an ear for subtle sound effects that will have you jumping at the snapping of lightbulbs. The writing is solid enough that chances are you'll wish the game had left out the frustrating stamina meter altogether and embraced the storytelling and exploration more fully. The premise is a little Slender Man meets The Ring, and let me tell you if you share my irrational fear of Japanese ghost stories, you'll avoid doing searches online to fact check the Fox myth's existence if you value your ability to sleep at night. I couldn't actually verify it exists as an actual legend (so if any of you have better Google-fu please let me know), but I did probably lose the next several nights worth of sleep from following the rabbit hole of scary stories online attempting to verify it for you, so you're welcome.

Despite the occasional pell-mell run for your life, Follow the Darkness still manages to be engrossing for its short runtime. The game is very good at directing you where to go next, and pointing out the things you need to interact with so you don't spend your time forlornly bumping into the scenery trying to activate the next step. On the other hand, there's a math puzzle that the in-game dialogue basically acknowledges is obnoxious, and you're expected to complete it all while running from a randomly appearing murderous ghost. It's not scary, it's annoying, especially since there are several places you can get stuck with no room to turn around and just have to take your hits until you die. The chase sequences wind up more frustrating than scary, and it's a shame since the game is otherwise a surprising powerhouse. The story is revealed in bits and pieces, and the game knows exactly when to show you something to keep you on edge, yet it never resorts to cheap scares. The story isn't exactly a happy one, and whether you find the ending satisfying is largely going to be a matter of personal opinion, though it is artfully executed. Follow the Darkness knows how to build tension and unleash it in a big way, making for a perfect evening's bite of the creeps, and we can only hope we see even more from its creator in the future.

I cannot figure out the code for door 312, nothing I try seem to work

I don't know if I'm suppose to first multiply the number of lights by 20 before subtracting it from the benches number, but that only seems to lead to negative answers. On the other hand the number I get from first subtracting the number of lamps from the number of chairs and benches, before multiplying by twenty, is longer than two digits. And surely if whatever number I get needs to be multiplied by twenty, and be only two digits the answers are pretty limited yet non of those possibilities seem to work either. :(

Decided to start at one and guess the numbers


If you read the note with the clue for the first time it says the code is the number of chairs and benches. When I read it again it added all the other information about lights and multiplication.

So 15 ended up working, which means the chairs/benches on the far left and right side of the elevator, which seems like they could either count as four chairs or two benches, are indeed two benches. And the wheelchair then doesn't count since I guess it's not permanently there :/

From the comments on the download page the creator didn't intend to make it quite so frustratingly difficult and is scaling down things people complain about. It says it doesn't rely on cheap scares, but just checking: are there any jumpscares? Little things like things suddenly appearing on part of the screen are fine, but fullscreen ones are bad for my monitor's health.

Welp, I acted like the idiot in the horror movie and

after I went to Radiology, I walked back up the hallway on the third floor that had the black-and-white girl chasing/hurting me.

And got murdered by her.

I'm mildly disappointed that there wasn't more to interact with, considering all the little details and the fact the doctor mentions visiting/touching things could bring back some of your memories.

Surely I could have frantically attacked the

with an improvised weapon for a second before seeing it has no effect?

There are no jumpscares in this game unless you count random pops of electricity as you walk in dark areas. :)

I got in the staff room and left chased by the fox, but have no idea what to do now.

I'm stuck and I can't find the last piece of paper >.