Well, it's official... Catbug is the cutest thing in the universe. Part cat, part ladybug, all adorable, and as fans of Cartoon Hangover's Bravest Warriors will be thrilled to see, Catbug's now starring in his very own game! Your mission here is to glide through four different treacherous environments without touching any of the walls surrounding you, tapping the screen to fly upwards and releasing it to fall. Along the way, you'll collect a variety of goodies and trinkets, dropping them into portals in exchange for glorious cashola which can be spent on upgrades, power-ups and stylish fashion accessories. It's a familiar formula, but with some original gameplay elements and a healthy heaping of Pendleton Ward's trademark style, Fly Catbug Fly! by Ludoko Studios stands very strongly on its own. Every single collectible item is a reference to the show; fans will smile as they collect soft tacos, seahorse dreams and sugar peas. Even those unfamiliar with Bravest Warriors will find this inexpensive app to be charming and addictive. 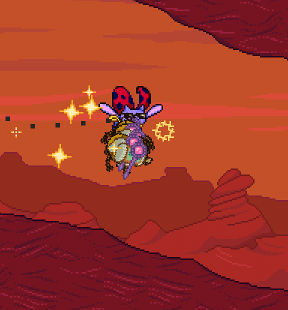 Catbug begins his adventure in the Holojohn, but after surviving for 1000m, you'll unlock the level's "hyper mode", with more stages unlocked the same way. The game offers a total of four levels to progress through, each with its own high-difficulty hyper variant. After you play a few rounds, you'll realize there's more to the game than just floating around. After purchasing them from Impossibear's store, Catbug can find an assortment of helpful collectibles including Himmel Man-Cheese, which gives you a protective jelly coating, and the classic golden star, which grants you invincibility for a short time. Even more wonderful are the character power-ups, which calls in a member of the Bravest Warriors to assist Catbug for a short time by clearing some of the obstacles away. Plus, watching stuff get blown up is always great fun! As you spend more cash to obtain and upgrade these many power-ups, you might also be tempted to dress Catbug up in cute little outfits from the show. A nice touch is that he appears in his new outfit on every loading screen, so you're encouraged to try the many different costume combinations. Along with all of this, Catbug has a "dive" ability, allowing him to drop downwards quickly to avoid steep stalactites. Unfortunately, the dive doesn't prove all that useful, brutally crashing you into the ground more often than not. The corresponding button is rather small, so many might find it useful to uncheck the "show dive button" box in the options menu, devoting the entire left side of the screen to the dive function instead.

With some practice, diving becomes far easier, as do the controls in general. Catbug has some weight to him, especially as he picks up more and more items. However, you'll find that the hit detection takes the most getting used to; only the center portion of Catbug's body collides with the walls, but his wings and the items he carries pass through, affording you more space to move than first appearances would suggest. Another qualm is that there is no continuation between the levels. You can't play through all of the levels at once; even in the "hyper" modes, you have to quit and restart from those checkpoints manually before you are given the chance to unlock the next stage. These are only small quibbles, though. Ultimately, what makes this game so lovable is the same quirky charm that oozes from the show. The bright, busy visuals, rapid pace, and unpredictable action make it feel like an episode of its own. Watching your score add up after a game, with the excellent Bravest Warriors theme playing in the background, is an incredibly rewarding feeling. Though there's no conclusive end to the game and veterans of the genre could power through in just a couple of hours, if you take your time and enjoy it, Fly Catbug Fly! is a fun and challenging way to pass the time. And for those of you who haven't seen the show, give it a chance. Remember: it's always been Wankershim!

NOTE: This game was played and reviewed on the Google Nexus 5. Game was available in the North American market at the time of publication, but may not be available in other territories. Please see individual app market pages for purchasing info.