Flowerville is a simple, charming sort of platform game where you play as Goffredo the famous gardener. He has the ability to make flowers come to life just by walking in front of them, which normally isn't that handy of a skill. When all of the flowers in Flowerville start dying, though, the queen summons Goffredo immediately. It's time to put on your gardening gloves and get to work. 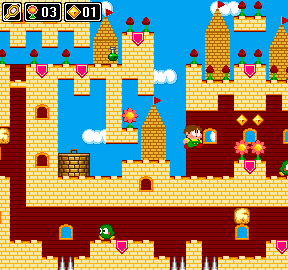 Control Goffredo with the [arrow] keys and jump using [z]. Each single-screen level is filled with flowers you must walk by in order to make them bloom. Hit the target number and make it to the exit well to complete the stage. It's not uncommon to get stuck or mess something up in the level, at which point you smack that [enter] key to restart. No worries! Helping you along the way are power-ups such as the feather that gives you a higher jump, the boots that let you double jump, and the potion that shrinks you down to size.

Flowerville is cute and simple, those are its two biggest features. The gameplay doesn't over-complicate anything, it's just a platformer with some power-ups to utilize. A gem and sticker album feature encourages you to do a little more than just smell the roses, and as you reach later levels you'll quickly realize this game isn't as easy as it first appeared. A fantastic freeware offering from Lionsoft, creator of Sprint - King of the Jungle and 8-bit Halloween.

Graphics look kind of ripped off from Rainbow Islands.

That's impossible, Fanjita, because they're already ripped from the Kirby Series.

Anyway, a very nice game. I still haven't completed it but it has a nice difficulty slope, feels like one of those Game Boy games. Quite retro.

I said the word "Nice" too much, replace the second "Nice" for "Pretty". Apologies. :P

@Roytheshort, not Kirby's Rainbow Islands, but these.

And I agree, it's obviously ripped off.