It's October, and you know what that means... time to get in the spirit of things by playing something spooky! But what if you want something a bit less straight-forward and a bit more surreal? Then it's time to talk about lol's freeware indie Yume Nikki fangame .flow. What's it about? Well, that's... less easily stated. It follows rumple-headed Sabitsuki, a young girl whose life seems to revolve entirely around her tiny room... her bed, her television, and... her computer. She doesn't speak. She doesn't go out. She doesn't even seem fully awake. But by turning on her PC and sitting down in front of it, she can connect and explore her subconsciousness... and the things she encounters there, from the bizarre to the terrifying, are open to interpretation. Largely because the game ain't tellin' you nothin', no-how. 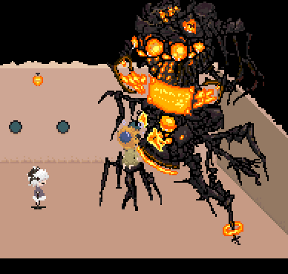 Use the [arrow] keys to move around, [spacebar] or [Z] to interact, left or right [shift] to perform an action based on whatever "effect" (item) you have equipped, and [X] or [ESC] to open the menu from which you can equip new things, check your status, and "Get Up", which returns you to the waking world. Much like its inspiration Yume Nikki, rather than giving you a set objective, or any objective at all really, .flow is about exploring and experiencing. Despite having multiple endings, it's almost more like an interactive art piece. Once you're connected to her PC, you can leave via the front door and explore a strange mindscape of unusual maps full of symbolism. The effects Sabitsuki gathers vary greatly, from the ability to create rain and music to beyond, and when used in the right places, can do more than simply alter her appearance. The only way to save your game is to use the bed when Sabitsuki is awake.

The biggest problem most people will have with .flow isn't even the lack of direction so much as it is the way the maps are designed. With most of them taking place on flat black backgrounds and "wrapping", meaning Sabitsuki can walk forever and keep cycling around the area, combined with doorways frequently being less than obvious, it's easy to get lost and wander in circles. While a systematic straight-line approach to searching can help, it sort of ruins the engrossing, dreamlike feel the rest of the game captures so well. While some people will find the deliberately enigmatic and seemingly incohesive plot a turn-off, others will embrace .flow for an experiment in observational storytelling and adventure. And grossness. And general disturbing imagery. Because make no mistake, while it may initially just seem sort of weird and even a little cute, .flow contains a lot of gore, violence, and other disturbing content as you play. It's not for everyone, it's strange, it's freaky, and it's deliberately obscure. But with patience, like its inspiration Yume Nikki, players who enjoy connecting the dots and surreal horror will find this an... interesting experience, to say the least.

at first it started well
i played
then it was going t start...but it started to repeat the begining about every o.1 seconds.
then,suddenly it made a loud static noise and a ???!!!??? pooped out (and fullscreen went of)
suddenly ,my AVG alarted me
I HAD TO RESTART MY COMPUTER TO BLOCK THE VIRUS!!
WHEN I WENT TO DELETE IT, IT WOULDNT WORK!!!

Jean, did you set your computer's system locale to Japanese? These games tend to break if you don't do that. I'm not sure why AVG would report it as a trojan, since mine doesn't.