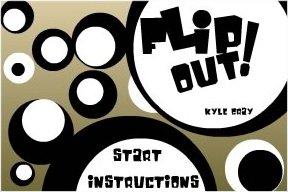 The entertainment technology students at Carnegie Mellon University (CMU) are up to their Experimental Gameplay antics again this semester. Their goal is to create over 50 games in one semester by popping-out four (4) new games every Wednesday. Each week a theme is chosen, and the games for that week are designed with that theme in mind. They even openly invite everyone to participate in their weekly game design and development experiment!

So far, it appears that the games submitted this term have all been designed for the PC. If you're feeling a bit experimental, why not head over there and see what they've done? As for me, I'm more likely to feel experimental with a browser-based game. We need more experimental Flash games folks! 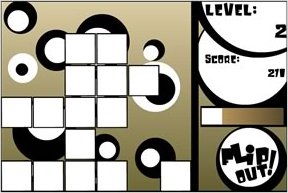 Fortunately, there were a few Flash games developed as part of the program last term, and the best of the bunch was this addictive casual game by Kyle Gray simply titled: Flip Out. The objective of the game is to flip over all of the white tiles within the time limit. If you do, a time bonus is awarded. You get to move on to the next level if you get at least 75% of the tiles before time expires.

The game is simple and straightforward, and uses the mouse for control. Just roll over a tile to turn it over, but be careful! Rolling over a tile previously turned over will turn it back. A very pleasant casual game to play, and quite an achievement to have been built in just five (5) days.

Gets kinda boring with time though...

I agree with you, Monkey, that it can get boring after a while. I believe Kyle attempted to add some depth to help ward off boredom with the inclusion of bombs and dark squares as you get into the later levels—though I'm not sure exactly what the darker squares are supposed to accomplish.

It's an interesting game idea, and one that I think has potential, especially if someone wanted to take the idea and embellish it just a bit farther.

I really like that the game relies on gesture rather than clicking. Its nice to see a designer use the mouse's advantages in a simple interface.

omg...that was really easy, i stopped because i had to do chores...something like 37k or w/e...just wait till i have more than 5min to play ^.^ very nice game Jay

You can 'cheat' by left clicking and no new squares will emerge. If they removed this, it would be much more challenging.

Plus, they could come up with shapes that are harder to do in a single line.

The fun of this game was short lived. While the use of scrolling rather than clicking is nice. and the addition of bombs and dark squares (which you have to roll over twice to remove; someone else said they didnt know what they did) adds a bit more when you get higher than lvl ump-teen-something.

However, the game wasnt coded to be user protected, simply right clicking and unchecking 'play' (stop for some players) will stop the game timer, giving you infinite time to goof off. Simply recheck 'play' again when you are done and erase any squares you acidentally added turning it back on.

The poor protection of the game saps too much of the fun. But when you get really bored you can always stop the timer and draw jumbo sized pixle art with it.

Caleb - sorry, you're right I forgot to include one. Fixed.

If someone needs protection to keep from cheating, well... that's just sad.

My experience has been that if someone wants to cheat, he will find a way to do it.

You can't protect people from themselves.

Wow - you guys have done way more rigorous testing than I was expecting. Apparently it needs a lot of fixing if I ever update this sucker.

For all you non-Mac users I highly recommend Tower of Goo.

Ah, I remember Tower of Goo, very interesting game. I tried to make something similar in Flash, but failed.

I found this game completely addictive. Just when I think I can't get past a certain level, and thus might get bored and give up, I suddenly break through to several more levels.

I'm impressed by how simple it is.

I have the same problem, fctd.

Jay, the link to the game results in a "URL Not Found" message.

The links should be fixed now. Thanks for alerting me to the problem. =)

It works for me. Try reloading the browser window.

the "Click" link at the end worx, the "Flip Out" link in the middle stilldoesn't seem to.

Thx Jay for the reply.

I absolutely love this game! I figured out that if you move diagonally sometimes, a white block won't appear, so it saves time. And by the by my score was 33881 or something, i kinda forgot....

Jay - It appears that the link has been changed to:
http://www.experimentalgameplay.com/cm/g/3/flipout.swf

[Thanks for the note. Link fixed! -Jay]

How sad this was added in 2005 and it still doesn't have a average at the moment, how sad!

[Ratings weren't introduced to the site until January, 2008, so there's a lot of games that missed out on ratings when they were first introduced on the site. -Jay]