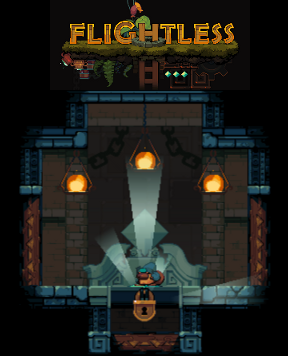 The ducks in the demo for Nitrome's upcoming puzzle platformer Flightless might be ground-bound, but armed with magical ladders to aid in their explorations of deep, dark tombs and a yen for gems, they're ready to set out on their adventure anyway. You can play with one or two people on the same keyboard, and by yourself, the controls are [arrow] or [WASD] to move and climb, and [spacebar] to activate your ladder. See, since you can't fly, or even jump, you need to use your ladder to get around. It shoots straight up when you deploy it, and can be used to get over obstacles, collect gems, or even smash enemies... which is handy since enemies will only hurt you unless you land on them when you come in contact. Take a hit and you'll be teleported back to the entrance of the room and have to collect any gems you got while in it all over again. You can even shoot your ladder down by pressing the down [arrow] or [S] while you hit [spacebar]. There are 50 gems to find hidden throughout the tomb, and some locks won't open to let you proceed deeper unless you have a certain amount of shiny rocks on you already. Now come on, little duck... let's... get... dangerous.

The browser version is ultimately just a demo for a larger project up for voting on Steam's Greenlight service, Flightless as it stands is a pretty solid and entertaining chunk of action. It looks fantastic, which is sort of par for the course wherever Nitrome is concerned, and does an excellent job of showing you what you can expect in the full game while still providing a substantial little experience in its own right. Each room you'll explore is its own self-contained little puzzle, and figuring out how to manipulate your enemies and your ladder to get through unscathed is both satisfying an entertaining, requiring a certain amount both of brains and reflexes. On the downside, the map lacks enough information about the rooms you've been in to be really useful. Also, speaking purely as an interested consumer, you might find that it doesn't set up the story Nitrome plans on delivering according to the Greenlight description, which in turn doesn't tell you how much more content you can expect in the full game, or even how much it might cost you. Still, Flightless is a great example of a demo done right... full of clever concepts and puzzles, and more than enough to whet your appetite for the full game while still feeling like it provides a great, plucky adventure on its own. Only one question remains... of the two little ducks, which one has the feather on his back?

Hi Dora, after u get to the the first yellow and green spinning arrows im stuck at this part, maybe u can help me.

thats not actuazlly the part, i tried writing it as a spoiler but dint work. right wen u get to the part i described above, and shoot a later up, there will be a room a room with 2 levers, cant get the gem here.

i figured it out... the room i was talking about above.

u need to use the second player as well, cant be done with just one

Just ended, The game was really good, it sucked that it was just a demo and it does not allow us to fight the first boss.

Nitrome posted a teaser image of this game MONTHS ago, and I've been anxious for it ever since. While I'm skeptical because, like Dora, I noticed that there's no mention of when it will be out or how big it will actually be, I'm also VERY encouraged because hey, Nitrome is making a FULL game and not just a quick Flash product. I've been a little worried because they've been sporadic on their game releases recently, but if this is the reason, then I'm content. Vote added, now to wait on Steam.

This is baaasically my game soulmate. The art style, the music, the gameplay, the ducks (ERMAHGERD SO CUTE)...!

Is there any additional content you get to see if you get all 50 gems? I'm at 49 so I guess there's another secret room I didn't find.

The game is really good and I look forward to its eventual Steam release (assuming it's not JUST the boss that's added to that version. :P)

I got all 50 and nothing special happened.

@Pablo All of the puzzles can be solved by one player. Using your ladder to get the gems is the key to the most difficult puzzles. They are not impossible.

I couldn't figure out how to complete the game with 50 coins without using a second player in one of the secret rooms. The one with the platform that goes down and to the left, and one at the bottom that goes from right to left over the spikes. I managed to get every other one on single player though.

You don't need to use a second player to solve any of the puzzles. It helps, but they all can be done with a single player. I've completed it about three times already without ever having to bring in a second assistant.

For the room with the two levers:

You don't need a second player. Just use a ladder! Put the ladder on the platform that moves down and wait for it to be pushed to the very bottom next to the spikes. Then go right and press the second switch. The platform at the bottom will push the ladder to the end, getting the gem without ever having someone to go down there!

I was waiting for this to be announced again. I was beginning to think maybe Nitrome forgot about it, but normally, when they delay a preview, it's because something epic is going on in Nitrome Towers. Not sure if I'll be buying it (no Steam Greenlight account), but I will definitely consider it.