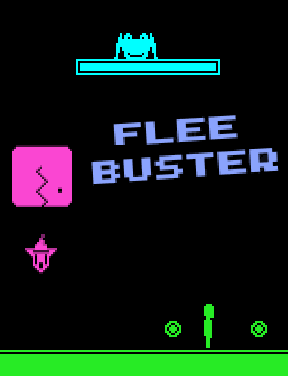 Flee Buster is about a little human escaping abduction from an alien tractor beam. No wait, it's about a spaceship on the run from Pac-Man's violent quadrilateral cousins. No, actually it's about a frog trying to jump as far up as he can from some evil looking spike-water. Schizophrenic? Perhaps. But the retro action-arcade game that took first place overall in Ludum Dare 21, by Chevy Ray, is much more reminiscent of Neapolitan ice cream: its three great tastes just taste great together.

The gimmick of Flee Buster is that it cycles through three different games, each controlled with the [arrow] or [WASD] keys. At the bottom is a timer that lets you know when the switch will take place. First up is a standard platformer, where you must out jump and out run a malevolent spaceship that's hot on your heels, while dodging the typical spiked pits. Second is a top-down space race with some nasty looking chompers trying to take a bit out of you. Last is a vertical-scrolling jumping game, where the only way to escape the rising tide is up. This one takes a little finesse, since you can only control your movement once in midair. With practice, though, you'll get the hang of it. Failure in any of them and it's Game Over... and if simple survival isn't hard enough, there's 130 scattered tokens to serve as bragging rights.

Many arcade games become easier once you are able to find some sort of groove. Flee Buster, with its Baz Luhrmann cuts between three not-quite-similar concepts, actively resists such a groove: reorienting yourself is undoubtedly the greatest source of the game's difficulty. You will find this mechanic either refreshingly challenging or needlessly frustrating. Not that the games by themselves are any slouch. Death always seems a centimeter away, and the "cliffhanger" sense evoked by the switching keeps suspense high. Altogether, Flee Buster has the hallmarks of the best 48-hour games: a solid work in itself, but one more than ready for expansion.

Wow, great game and it has NO MERCY! I haven't finished it yet, but I'm having fun trying. Oh, and thanks a lot, my neighbors now think I have Tourette's syndrome...

Good god this game is infuriating. I need a break.

Wow, one of the most ragequit-inducing games I've ever seen. I can't manage to play it more than twice before closing the window in anger.

I've beaten it a few times, but it keeps saying I got 129/130. Is this just another kick in the balls, or am I really not seeing it? All the other tokens are in plain sight, and almost 100% convenient to attain. Anyone know what token I'm missing?

AH so infuriating yet so addicting! Like all the best games! ;)

Does this seem a lot like "rom check fail" to anyone else?

Jase: Me too, I don't know where that last coin could be...I checked behind the things chasing you in the rocket stage, but it's still possible I overlooked something.

Me three, Jase and JIGuest. Though missing that one token still feels like a minor pain compared to hitting my head on the spikes in one of the last frog-jumps.

Seriously, that has to be my #1 death cause.