Some readers may remember the days when you'd once pay $50 USD to play a turn-based fantasy adventure RPG like King's Bounty on your computer at home, and with good reason. The unique creative concepts prompted a plethora of remakes, and even the occasional boardgame. Flash's Bounty is a streamlined, pared-down approach to what has now become a franchise of games derived from a single classic title, which only shows how much there is to be said for developing an original gaming formula. In Flash's Bounty you play a knight of King Maximus, keeping West Liberon safe from monsters and keeping the barbarian attacks at bay so the average peasant can go about their ordinary lives in peace. Maximus has promised to give the King's Bounty to whomever can retrieve the Unicorn Sword, which provides a convenient pretext to adventure through the landscape putting down surreal critters, restoring civilization, building forces and generally living it up with honor and valor. 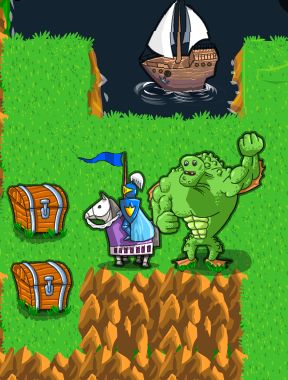 Adventuring with your apparently-clockwork steed takes place on land, in caves and eventually — when you can buy a boat — sea. (Don't worry about those all-black ships angling ominously towards you, I'm sure they're just friendly sailors with a love of quality gothic-industrial music.) Defeating the bad guys will gain you gold and experience, and you'll also get paid each week at a rate you can increase by exploring. You'll encounter various recruitable unit types here and there around the map, and with enough gold you can hire them up to a limit defined by your leadership ability. Each week a different unit type is featured, and their numbers replenish automatically. Chests will typically offer you money, or the option to distribute it among your troops instead for a significant leadership buff. Leveling will present a choice between two different buffs, and refreshingly if your level blatantly outclasses the forces you encounter they're likely to surrender without a fight and you'll gain experience regardless. Movement is with your preference of [WASD] and [arrow] keys, while clicking selects from menus. We found the maps large enough to keep things interesting, with more added through the course of the game. While Flash's Bounty does seem to overemphasize on the power of ranged units like pixies and archers and think that seventy peasant farmers wielding pitchforks are of no consequence — we beg to differ — we were delighted to find the diversity of all the martial units mundane and surreal, friendly and otherwise, available. And the ability to teleport the opposing ranged units directly into the thick of your heavy-duty bruiser melee forces is an unrivaled opportunity for irrepressible giggling not to be missed. With plenty of maps for adventuring and even an Endless Play mode, now is the perfect time to discover the Bounty.

Did not expect the ending, what a great hook. Nor did I expect

the horse being able to JUMP! And of course I only figured it out at the very end.

This game desperately needs an index of troop camps. I cannot remember where everything is. Teleports in the map would've been much more useful than in the battle mode.

Also, I played the game with a mouse. Pretty smooth, though the ship boarding was sometimes wobbly.

Oops. Had a trap fall at the same time as an enemy approaching. Game froze.

For me it's been months since I spent hours on a flash game, so I quite like it a lot. Found a big exploit: you can skip ghosts forever just by replaying battle when needed.

I didn't play the original one, is there anything more in it that there isn't in this game ? That is, should I play it too ?

@Shudog look at the map, that tells you were everything is.

I made the mistake of letting it kill lots of my troops. Leaving a very high number of ghost to deal with.

Retreat before it can get to your troops.

zzzzz, the original version features multiple villains and an artifact which must be gradually hunted down, more character classes, increased complexity in your creatures' morale with some types getting along better or worse with others, and plenty of overworld spells like the teleport that Shudog was talking about.

If you're enjoying this and seeking more features, you may find its 2008 successor, 'King's Bounty: The Legend' more to your liking. There are so many features added that it's probably best to consult the Wiki for it.

Thanks. The sequels to the 2008 version are not good ?

Shudog, how do you get

the horse to jump?

zzzzz, I wasn't trying to imply that, only that the 2008 version would have more features than the original.

Not necessarily. Some of the camps are on different maps, including hidden maps. It seriously disrupts game flow if I'm trying to replenish my army and I'm wandering three different maps looking for one camp.

Nice little time-waster. The text could've used a bit of copy editing, and walking around through already-explored maps to buy more units got a bit tedious, but overall not bad.

Here was the strategy that seemed to be most effective for me:

Early on, use 3 ranged units and 2 fighters. Later switch to 3 fighters and 2 ranged. If the enemy has ranged units, teleport them into the midst of the fighters. Otherwise, use the berzerker spell on your ranged units to damage the opposing army before they can reach you. Teleport can also be used to position fighters so they can all attack the enemy at once.

This strategy got me through easy mode. It'd take some testing to see if it works on harder modes:

Rush with a hoard of shielded pixies; they'll attract all the attention. Have 3-4 ranged units. At the end of the battle, use regenerate on pixies. Most levels had no casualties.

The horse will jump when:

You get the Shoes of Levitation in Barbaria. To use them you just cross any single tile gap and the horse will jump the gap.

Can someone tell me how i use my scrolls

As suspected, Unlimited will sometimes generate maps with areas geographically separated from the rest (body of water, no access, and no adjoining city). However that was one map out of 20, so mayhaps it only needs a little tweak.

Unlimited becomes monstrously hard once the throngs come out, and the camps only give out 2 kinds of monsters. All that money is useless if there's nothing to buy. For several turns, I used the Resurrect spell to preserve 1 unicorn. Yes... the last unicorn.

I remain impressed by the movement animation and control, though.

I can't help but think of Monty Python and coconuts every time I hear the galloping horse sound effect.

How do you jump?

How do you get the chest in the Red Mines? Is it just a red herring??