Chris Martin's entry into Flappy Jam, a good natured group of game developers making games to support and encourage the often maligned creator of Flappy Bird, is as goofy as it is a shameless and yet clever plug for nostalgic '90s gamers like myself. FlapBound (hit [spacebar] to skip the overly long title fade-in) is an arcade/Flappy Bird spin on cult classic RPG Earthbound... only without all that pesky plot and actual, well, RPG elements. Just click or hit [spacebar] repeatedly to make Nuss (not a typo) flap and try to make it through as many gaps between the obstacles onscreen as possible. Occasionally you'll encounter a mysterious pencil that can only be removed if you nab the eraser beforehand, but for the most part, it's click East, young Nuss. Simple? Well, yes, extremely, and for a lot of people that, more than Flappy Bird's Mario-esque design, was the main reason why they reviled it. But sometimes simple is fun, and by throwing in several unlockables, achieved by nabbing the floating presents at certain milestones, FlapBound provides an incentive beyond a high score to keep playing. 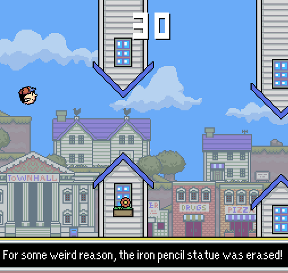 What makes FlapBound stand out as clever is the way in which it incorporates its source material into Flappy Bird's gameplay and overall design. Everything from the music to the graphical style is just slightly skewed to come close yet not quite exactly mimic Earthbound's iconic locations (though only the first stage really stands out visually), and the way the game over is even incorporated as the RPG's lost battle text is a nice touch as well. It's a creative homage to both influences, though chances are even if you're a fan of Earthbound, if you're not also a fan of Flappy Bird it'll be too repetitive too quickly. Simple little things, like the ability to play as different characters through the various well known stages (Paulu, Puu, and Juff, anyone?) would likely have added a lot more replay value without losing the simple one button gameplay. As it stands, FlapBound is still a silly and well implemented "clone" of one of the most well known and notorious games around.

I definitely like the Earthbound "skin" on the game, but otherwise this style of game doesn't appeal to me at all. I wish I could see the various Earthbound themes used, but I don't think I could stand playing this long enough to earn them. :-P

Kinda makes me wish for a copy/paste of Earthbound themes on other stuff...or maybe I'll just go play Earthbound!

But what about an App D:!

Thought I could score higher here than on the original. Nope... :(