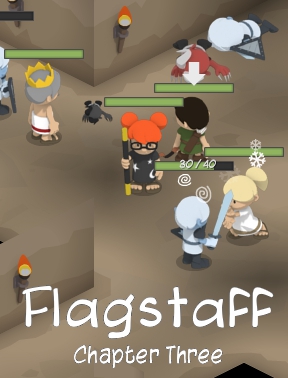 Laugh if you want, haters, but I say that the Flagstaff series has developed into one that truly has its finger on the pulse of horror. Oh sure, other RPG titles may have you facing sinister demons or waves of undead, but the second game in this series had four adventurers (and a king in a towel) facing a relentless array of puns. Now that you've defeated that pungeon master, the five-man band is descending into a cave with an even greater threat: humidity. Turns out putting a cave of ice and a cave of fire next to each other isn't that great of an idea. See if you can survive without your hair getting too poofy in the latest romp, Flagstaff: Chapter Three.

If you've played the other two chapters, especially chapter two, you already know what to expect gameplay wise. In fact, other than new skills and enemies, I didn't notice anything truly different between this chapter and chapter two. The game is primarily mouse-controlled, with [arrow] keys or [WASD] to assist in navigation if you prefer. When it's your turn, move your characters around the isometric, randomly-generated dungeon and use their skills to attack enemies. You start out with some skill points already to spend as you choose, and you level up as you kill enemies. Once you've exhausted your options, click end turn to give the enemies (if any) a chance, and then it's back to you. Your immediate goal is to get to the end of the level, the ultimate goal to get through all the levels. You actually don't have to kill any enemies to beat the game. You could conceivably just put all your skill points into speed, health and healing and sprint like blazes.

The good thing about Flagstaff: Chapter Three is that it's more of the same, and since the previous games were fun, light-hearted time wasters well received by many in the JIG community as well as myself, more of the same can't go too wrong. Of course, being more of the same is also its biggest drawback. While it probably would have slowed things down too much to add another party member, some new twist would have helped make the game feel more like a standalone title and less like an expansion pack. I generally don't want to be told "if you liked X then you will also like Y." I want to be told "if you liked X, you're going to LOVE Y!" Flagstaff 3 is the former, not the latter, but it's still an amusing dungeon crawl experience.

I'm laughing... does that mean I'm a hater? Seriously, every time I see a new Flagstaff I am hoping that they improved on the clunky gameplay, but apparently that is what people like the best.

I prefer my rpgs to have party movement and deal with positioning in the combat screen. Its like it tries to do real time combat, but for me it falls short on capturing the essence of it (whatever that means.)

If I laugh because this game is funny in a sense of humour does that make me a bigot?

Got to see how they survived the bomb and what happens next, thanks JIG just watch your words :)

Same stuff as usual, which is good (just like it says in the review.

However, bugs are still a problem, and no attention is being paid to resolving them.

I've had a few on my first playthrough here.

-Sometimes, characters will use another character's attack or spell if the corresponding hotkey is pressed.

-Reviving a character while an enemy is on the same tile results in the enemy being taken off the board until the revived character moves.

-Taunt rarely works, if ever.

-Dead enemies will have the "poison" sign over them, probably because the poison processes on the hit that kills them.

Is it me, or is this chapter a lot harder than 1 and 2? 1 and 2 were quite casual, where this one seems quite challenging. I for one can't seem to get through a single fight without one of my party dying.

Personally I feel like the games are getting shorter with each installment... o_o

@Raeden, the enemies just do more damage outright. There aren't more of them, and if you're smart, they won't get any farther than one kill.

@Angelade, I think the problem you're feeling is actually that we start with more skill points. With more tactical flexibility right off the bat, no matter how hard these drones hit, we'll still have our optimized strategies to fall back on. And those strategies start out stronger than they did when we had to start from scratch.

I doubt the actual content is anything less than what it was in the previous installments, although it wouldn't surprise much if it were.

This game really isn't much fun if you play it right. What you do to never lose is this (Kind of a walkthrough):

1. Equip your priestess with resurrect.
2. Give both the wizard and the ranger maxed range and maxed damage.
3. Give the ranger infection arrows and the wizard mass confusion.
4. Use any remaining/later points to get royal command for the king and chivalry for the knight (chivalry is by far the most overpowered ability), as well as health upgrades for the priestess (just in case) and both the ranger and wizard. I stuck with two health upgrades for the ranged characters, and then pumped the others for boss fights.

With your party outfitted that way, advance your wizard and ranger (only) one square at a time. When an enemy appears, open up on them with everything you've got, including using royal command and chivalry. End your turn whenever you use an ability or an ability is still cooling down. The enemies rarely hit you, and your priestess can revive anyone who dies.

The advantage: You can't lose.

The disadvantage: It's a heck of a grind.

Did I miss something, or is there no boss fight in this episode??