Have you ever wanted to just drop everything and make a career out of doing something you love? Well, if you love beer or time management games (or beer and time management games), you're in luck. Developer Bit By Bit Studios has released Fiz: The Brewery Management Game, where you can live out your beery dreams without risking your life savings in the process. 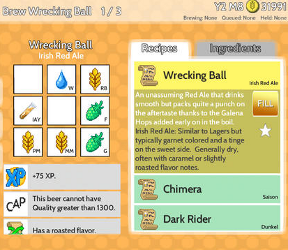 Gameplay is straightforward, and the tutorial makes it easy to pick up. Choose your recipe (or try to guess a new one) based on what ingredients you have and what you think will sell. You'll always have four workers at any given time, and you don't even have to pay the ones you start with. Assign employees to job stations based on their skills; the more suited each employee is to their job, the higher quality your beer will be. Once the beer is brewed and fermented, you can either put the batch in storage or choose where you're going to sell it. This is the trickiest part of the game, as you need to balance the needs of your customers with your own financial needs. There are stocking and recycling fees to consider, as well as the fact that some markets are only open part-time. 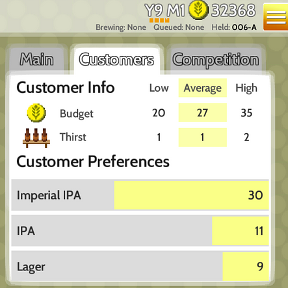 One of the biggest things that makes Fiz different from most modern games of its type, though is that there are no microtransactions and no forced waiting periods. While beer takes time to brew and sell, you're never encouraged to pay to avoid a long wait. You can also pause the game whenever you want, and the game pauses whenever you leave, so you can take as much time as you need to decide who's in charge of the bottling station and who gets to mash the hops. The world of Fiz is small, but densely packed. The recurring characters bring a lot of life to the short cutscenes they're in, and the huge variety of recipes and stores means you'll be doing a lot of research and experimentation if you want to sell the best beer in the city. And when you beat the game, you get the option to start over in New Game plus mode, so you can keep things hopping with barley any interruption.

Fiz has a quirky sense of humor reminiscent of the Diner Dash series. It's hard not to smile at the person at the fermenting station saying "Dance, little yeasties!" or the beer called "Siegel's Hoptometrist." But Fiz has a lot more under its hood than adorable pixel graphics and punny beer names. It's one of the most sensible time management games that's been released in the last couple years. The gameplay is well-balanced and presents challenges organically as you become able to complete them, so there's no frustration at being given impossible tasks and no boredom when there's no challenge to fulfill.