Scott Cawthon's indie horror game Five Nights at Freddy's (also available for Android) should probably be called "Half a Shift at Freddy's Before You Quit by Leaving a Scrawled Middle Finger for Your Supervisor to Find the Next Morning". The gist is that you take a job as an overnight security guard at Freddy Fazbear's Pizza, where all you should have to do is sit around and watch the monitors, though what you actually end up doing is finding yourself being stalked by animatronic horrors who creep through the dark hallways to where you cower in your office, nice and fresh for dismemberment. Your defense? Well, all you can do, all you can literally do, is play with the light switches and close the two doors on either side of you. Temporarily. See, you have a limited supply of power to last you through the night, and keeping the electronic doors closed or the lights on will burn through it much, much faster, leaving you defenseless when it runs out. As a result, you have to watch your monitors, tracking the movements of the unpredictable fur-and-steel murderers, and figure out when it's safe to leave yourself exposed. So, yes, Five Nights at Freddy's is basically proof that the internet has a deep, abiding love affair with jump scares, self-loathing, and trying to make you void your bowels. 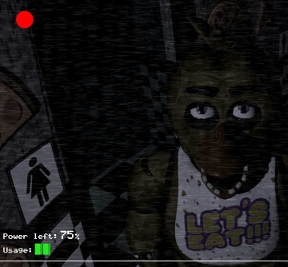 Five Nights at Freddy's is essentially a very simple concept. All you can do is look around with the mouse, and click the light and door buttons on either side of you to turn them off and on. (Do not press ESC. Pressing ESC causes the game to immediately shut down and you'll have to replay from the start of whatever night you're on.) Mousing over the bottom of the screen raises your monitor menu, where you can click on room icons to switch the camera to display there. Your den of fear is helpfully marked at the bottom of the map, so your job is to cycle through the views and figure out where the things stalking you are, so you know when to close the doors, and when it's "safe" to open them. The light itself won't actually protect you when you turn it on, but it does help you see into the blind spots just outside your room where the closest cameras can't reach. If you see something in your doorway, you usually have a few seconds to slam the door shut before you're attacked, and you'll have to wait until it's safe to open the doors again. If your doors and lights suddenly fail to function, it may mean that you've got a visitor who's hiding and just waiting for you to look up from the screens...

There are five creatures to be concerned about, and just because you find out where one is doesn't mean that it'll stay put if you switch over to another view for a second to try and locate the others. Each night, and animatronic, has its own set of challenges and "rules" you'll need to figure out... some may only become active at certain points in the game, others only move when you're not looking, and others, well, they don't like being looked at much at all. It's like if the Weeping Angels got their start at Chuck E Cheese, and instead of a sonic screwdriver you have tears and fumbling hands. Fail and you'll have to restart the night over. Last until 6AM, and you're safe until the next night, because you're really pulling for that Darwin Award, dangit, and you're committed to this terrible job. Beat all five nights, and you'll be rewarded with a sixth, even harder night, and surviving that will unlock a simplistic level editor that allows you to set the activity level (and thus the difficulty) of each individual critter to play some more. 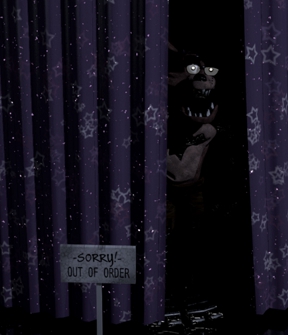 Analysis: This is one of those games that not only kept showing up in the submission box, but was also e-mailed to me personally several times by different people who all seemed perversely gleeful about telling me how terrifying this was and how much they wanted to hear about how badly is scared me. Which is... sort of touching, I guess? It's like I'm Princess Celestia, only instead of letters on friendship, I get e-mails about animatronic murder. Make no mistake, Five Nights at Freddy's is basically a jumpscare factory with its vicious use of sound and sudden imagery, but that's not to say its entirely without subtlety all of the time. Further, though reflexes will be key in order to survive as the nights march on and the creatures get faster and bolder, but frantically sweeping through cameras and using the doors or lights before you really need them is a good way to get murdered as fast as possible. The game tries to goad you into a panic (and there will be times when panic is called for), so your best defense is fighting the urge to freak out. Most of the creatures have specific patterns you can learn, and you know what they say... know thy enemy, still get mauled to death by that friggin' bear. It's a very simple game in a lot of ways, but it's not random, even if different nights yield different challenges based on the activity of specific characters.

There is a story, sort of, as the recorded calls you listen to at the start of each night subtly fill in a bit of background history, and if you keep your eyes peeled you'll notice things in the backgrounds of various rooms that tell a tale as well. There's a lot of great, simple subtlety at work, and the game wields sound as effectively as a sledgehammer... the constant noises will keep you on edge, but also can cue you in on danger or when something's moving, so you can't turn it off, either. That said, it definitely feels a little rough around the edges. You can't pause, you can't "fast forward" through the phone calls, and once you're done, you're done. There's not a whole lot of reason to replay other than bragging rights for finishing a custom level with the difficulty maxed. While it may be a vicious jump scare factory, however, the fact that there's actually strategy to it keeps it from being brainless. The dark visuals give everything a grimy, gritty look, and the whole thing feels sinister, with the effective use of unexpected events as you swap from room to room making you feel like you're being both stalked and toyed with.

It feels tailor made to be played and shared with friends who like screaming and teasing one another about it, and it's clear Five Nights at Freddy's was made by someone who has an eye for the eerie in addition to the stuff that makes you squeal. Sometimes you want Silent Hill, and sometimes you want Slender, and there's room enough in the world and your nightmares for everything in between. For the princely sum of $4.99USD, Five Nights at Freddy's is a fantastic choice for fans of screamy horror who aren't put off by a lack of greater depth and mechanics and appreciate the value of a good shriek.

Thanks to Adam, Michael, Kassa, Anon, and Nikolas for sending this one in!

Seriously, why would anyone ever come back after surviving ONE night at Freddy's, let alone work the entire week?

Manage to survive one night.
Call in OSHA.
Report egregious work safety violations.
Get Freddy's closed down (and possibly demolished via air strike).

This game is so scary, it made a British guy whose job is to play video games cry in the corner

Plot twist: the protagonist is actually an undercover health and safety inspector who wants to see firsthand how hazardous it is to work at Freddy's.

A mobile version was just released as well.

Awesome, thanks for letting us know! Review has been updated. :)

I'm so glad you reviewed this game. It's absolutely worth the five bucks, even if, like me, you never get through night 4. The jump scares will eventually wear out their welcome, but the suspense will stick with you. I love the incessant urge to frantically run through the monitors or flick the lights when you know you're running out of power. And there's nothing like

Desperately trying, and failing, to keep track of Foxy, or letting Freddy lull you into a false sense of security...

Why do they even need a night watch? Just let Freddy and the crew take care of any burglars!