Fabian Van Dommelen, Joris Van Leeuwen, and Ivo Van Dijk are the ones responsible for the simple yet infectiously cheery fishing sim Fishy Waters, which actually has a mildly depressing premise despite its gorgeous storybook presentation. Our heroine loves nothing better than fishing with her father... right up until a monstrous fanged kraken swallows him and his ship whole. Vowing vengeance, she sets out to fish and sell her way to the best equipment in the land so she can take down the kraken herself. Use [WASD] or the [arrow] keys to steer your boat, and hit [spacebar] when prompted above the shadow of a fish to try to reel it in. Follow the directional prompts to tire it out, then sell it at the market to upgrade your equipment and gain access to other areas of the map! 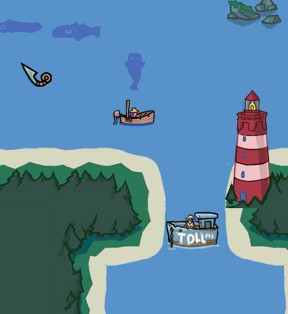 It's a great premise for a fishing game, and Fishy Waters has an equally great presentation with its bright art and catchy soundtrack. It's the sort of thing I'd desperately love to see expanded into a bigger game, one with a more prominent story, more locations, more characters, the whole works. Especially since as it stands, Fishy Waters is a bit too much of a grind. There just isn't quite enough payoff in terms of new content as you unlock new areas, and as such it winds up feeling too repetitive, too soon. It's not necessarily the simple gameplay that's the issue, it's the lack of variety, and with more meat on its bones Fishy Waters would be an absolute knockout of a charmer. As it is, it's mostly a cute diversion that has a lot of potential, and a nice fit for a coffee break sized diversion full of fins, scales, and gaping maws of teeth and tentacles and nightmares. And people wonder why I'm afraid of the water.

Is there an endgame, or is it just the rescue? I thought, if you go back to the original dock maybe there would be a sort of finish, but apparently not.

It was a little grindy and short but I liked it. It was a charming little game : )

Cute game. Too short, though. The premise of this provides a veritable sea of possibilities to develop a much longer game.

A fun, short game, however

It's hard to get past the astounding 8 MB of horribly compressed JPEGs in place of lossless scalable vectors, characteristic of Flash.