Maulidan's Fishtopia Tycoon is just so many neat things combined into one. It's a tycoon game! It's an upgrade game! It's an avoidance minigame! It's also a breakfast cereal, a new brand of smart phone, a hip cult religion, and we understand there's a book deal in the works. Alright maybe not, but what it is is a whole lot of fun! You plays as a protagonist with a potentially unhealthy fascination with fish who's not only the sole proprietor of Fish World, a gigantic fish-themed aquatic amusement park, he's also the sole fisherman responsible for going out fishing each day to keep the place supplied with fish. Tourists show up each day to admire the aquarium exhibits, and there are merchant stalls there just in case they'd like to take home a lovely memento of their visit in the form of, say, a live Brown Trout or Tilapia or something. Like ya do. While we're relieved this hasn't caught on yet with the major cartoon-themed amusement parks ("Live mouse and duck in a bag for your small child, sir?"), it's a great model for pet and grocery stores. Catch, breed and sell diverse species of fish and grow your very own tourist attraction! 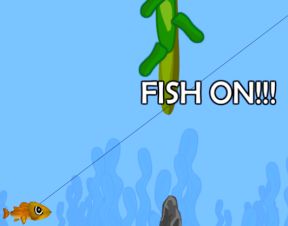 Fishing means going out to various spots on the map and tossing lures which the game calls Bait. A rapidly-fluctuating meter determines how far out you'll cast, depending on when you click. You'll enter an avoidance minigame, clicking to pull on your rod and temporarily add some buoyancy to the hook. Avoid getting your line caught on rocks, seaweed and the edges of the screen and you'll be able to snag fish! That's when avoiding those hazards gets more difficult as the fishes can add quite a bit of pull, but there are other rods and lures available to make things easier. Get the fish back to you and it's yours! It gets added to your stock, and tourists at Fish World can buy it once you've made it available at the stalls. There are also Monster Fish, which aren't quite as Lovecraftian as they might sound. Catching two or more Monster Fish of a given species will enable you to keep breeding more of them, making for easy sales back at your kiosks. As you play you'll earn money for better equipment, and with the fishing minigame, the diverse species, the in-game quests and the Monster Fish breeding all the time it doesn't feel grindy at all. New areas will unlock as you complete quests, which keeps things interesting, and with a very useful if perhaps imperfectly translated in-game tutorial you can be off and playing just about as soon as the game loads. Maulidan have combined a plethora of different game elements into a cheery, well-crafted, refreshing nature-loving experience that will brighten up your day.

Flappy Bird called, they said even they don't want this dumb avoidance minigame.

And here I thought the awful flappy bird craze died out months ago.

I wouldn't mind the 'flappy bird' stuff... its the fact it trys to give an add every time you catch a fish or seems that way.

Terrible first impression. The very hardest control is when you have no upgrades! Once you can afford upgrades, control is so much easier, and even easier once you hook a fish. Not to mention the incessant ads keep threatening to freeze up the game.

If you can get past the first fishing trip, this is great for younger players, as these are real fish species with information included. The Tycoon part is a bit underwhelming when it comes to scaling prices, goals, and achievements, but you can still get away with an easy supply and demand lesson.

Adblock works well on this game.

Which bait are considered rattle or vibration bait?

AdBlock harms our site. Please don't advocate using it. We have since uploaded a version entirely without ads provided to us by Big Dino, the sponsor.

Which bait are considered rattle or vibration bait?

This game needs a RSI warning on it, I think. I know my fingers were very tired after playing it for only a few minutes. It would have been nice to have had either a 'floater' lure that worked on the mouse button being held rather than repeatedly clicked, or some other control option for the mechanic.

As for the rest of the game...do the radars actually *do* anything, or do they just trigger the appearance of Monsters in the area? An actual radar would have been nice, especially as I found myself having to fish the same section over and over again because the one species I needed wasn't appearing. At all. Despite it having appeared before while reeling in some other fish.

There are a lot of things I could say to criticize this game, but one thing I liked were the little descriptions below each fish in the breeding center.

I hate the avoidance mini game too because it gets tiring when you gonna catch a tons of fishes.. gladly, you dont need to throw the line full power so I usually go the minimum power I need to see some reefs... even on low power I can catch monster fishes.

Bleh. Tried to give this another chance, and keep running into bugs.
In particular, I keep seeing fish appear past the last obstacle in the avoidance section, fish immediately drop like a rock when caught causing an instant line break, and for some reason, the whole concept of 'auto restock' on the sale stalls seems to have been missed, since I keep having to hit the button all the time to restock despite having all stalls set for auto.

vulpisfoxfire: actually the 'auto restock' feature doesn't have a bug, the name is misleading though. It was originally called 'quick restock'.
I asked the developers to rename it to 'auto restock' because I thought the feature was automatic, which it isn't.. My mistake.

In the latest game version it's called 'quick restock' again.
I'll try to contact JIG for uploading the new version.

Cool game so far, but could you please add the item names in the equipment screen???