Fish of a color 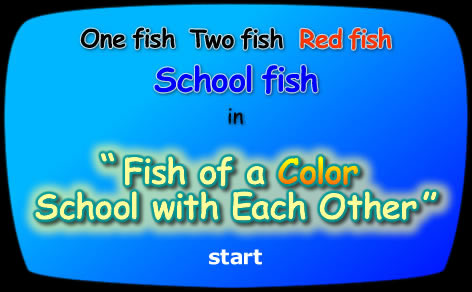 Lately I've been working on one of the coolest projects so far in my RIT education, and it's for Multi-User Media Spaces (MUMS) taught by Professors Nancy Doubleday and Steve Kurtz. The project, which I'm calling "Fish of a Color", aims to simulate flocking behavior by implementing behavioral rules, though I guess it should be dubbed "schooling" behavior since we are using fish - and yet these same rules apply to birds and herds as well. The behavioral rules that we are concerned with in these simulations are:


Anyways, I really got absorbed into the project as the gratification was tremendous when my first fish began to swim back and forth in the 3-dimensional tank. Then I began adding external influences one by one (centroid, average heading, collision avoidance, and velocity matching), and with each step the fish took on increasingly more life-like appearance due to their emergent behavior.

Play Fish of a color

Would you quit making the rest of us look bad? :-P

Not possible, Brock. With the way you had those 3D primitives driving around during the first lecture of 3D back in 434 last quarter, I'll accept no big fish tales from you. =P

Wow, this is a very impressive model of flocking behaviour. Indeed, it is even quite addictive as something to watch

Thank you! I enjoyed watching it, too, as it was taking shape. =)