Surely you remember Within a Deep Forest? Perhaps you loaded up some unique user levels in Knytt Stories? Maybe you demoed and later purchased Saira? Then you have experienced programmer Nifflas' fare and I'm willing to bet you're ready for more.

Fire Nuclear Crocodile Killer (FiNCK for short) is a downloadable puzzle platformer for Windows, but don't let the title fool you. In fact, out of the four rather unrelated things it suggests, I only encountered one during the whole game. As a Nifflas game, FiNCK must live up to a certain standard of cool relaxation instead of firey, manic arcade action. However, it differs from the author's previous offerings in that it forgoes atmospheric exploration in favor of a puzzle-driven, often hair-pullingly-frustrating experience. The game itself is free, but to access custom level support, you'll need to purchase it from Nifflas' site. 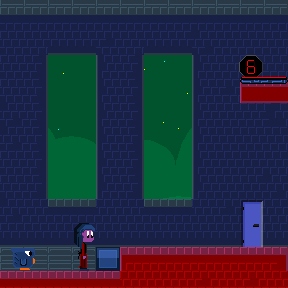 The central gameplay mechanic of FiNCK has you picking up objects and using them to suit your needs. Use the [arrow] keys to move. Stand on top of a block, bird, or bomb and press [A] to pick it up. Press again to throw the object, or press the down [arrow] to place it directly below your character again. There are a variety of things with which to interact, and all have different properties. For example, metal bricks limit your jump height when you hold them and can withstand bomb explosions, while birds will give you heightened jumping abilities. Blue blocks will slide, ignoring all previously established rules of friction. Bombs...explode. They're bombs. Furthermore, every object you pick up will give your character a small boost when thrown down. This technique is important to master in order to reach all the areas of the game.

FiNCK is deceptively large. The world covers five levels and can be navigated using the doors found scattered throughout each level. Careful, though: while some doors will move you between two areas interchangeably, others will lock you out once you go through them. You will always be able to come back, but the lack of an overworld map means the experience can be a little frustrating. The whole point of the game is to gather just 25 coins scattered throughout world. Gathering each one presents a unique challenge, whether it be withstanding a wave of creatures or building a tower just high enough to reach a small precipice.

Enemies, while not hugely varied, stand in your way and are difficult to destroy since your character has no true offensive capability. Touching an enemy means a one-hit kill which adds a further dimension of frustration to an already challenging game. Combine that with areas in which you can get stuck and believe me, you're going to die--a lot. Brave the obstacles, however, and you'll be surprised at how satisfying the collection of that one last gold coin feels. 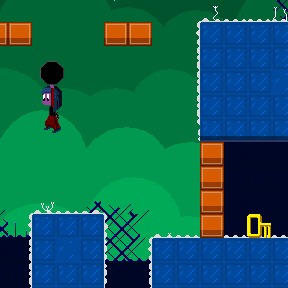 Analysis: I'm a huge fan of Nifflas' games. FiNCK, from its goofy title to its charmingly simple graphics, is no different. The visual design of the game is not revolutionary, but everything moves and flows well enough to make up for a few imperfections. The original soundtrack is looped in the free version, but is pleasant and at times even enjoyable. I admit, however, that I muted the game after a while because although the music fits the game, the sound effects — particularly those that accompany jumping — drove me nuts after a while. But we are not here to get hung up on sound and visuals. How is the puzzling?

The complexity of the puzzles range from "I think I see what he's getting at!" to what I like to call "Keyboard Breaking Death." Since each area is self-contained, you will have everything you need to get to that next door or coin — you just have to figure out how. The thoughtful level design means that "out of the box thinking" is a must. Since areas reset when you die or leave and return, an object will sometimes be used for more than one purpose. For example, to access one door you might have to blow up some bricks with a bomb. When you return to the area, you might need to access a different door, meaning the bomb you used before is needed to give your character an extra boost up to a ledge. This sounds complex, but Nifflas' design is so effective that even if there is only one way to solve a puzzle, you'll feel like the solution is what makes sense and not simply what the designer wanted you to do.

All the puzzles are interwoven in an increasingly complex but relatively easy to follow map. If you want to get to a seemingly unreachable door, you will probably find your way back to it at some point. So while it's a bit overwhelming at first, getting around the world starts to feel natural and rewarding. FiNCK lacks some of the immediate exploration appeal of the Knytt saga, but improves on the problem-solving formula of Within a Deep Forest by giving the player more puzzle variety. Altogether, FiNCK is a welcome addition to Nifflas' growing library.

If you're prepared for some creative thinking and want a challenge, FiNCK will certainly provide. I did not find any crocodiles in the game (or fire for that matter), and the game really isn't about killing anything. What it is is a pleasant romp through a puzzling world that feels rewarding with each collected coin.

I would love to know if anyone knows how to get this working under crossover games. I know I once got knytt stories working through that product, but I don't remember what I did.

Does anyone else remeber Lyle in Cube Sector?

Finally got all the coins and finished all the areas.

Overall, I felt it was very well done and nicely thought. All the "puzzles" and rooms have neat solutions that rarely require any luck, though timing and some reflexes are definitely vital. That said, many puzzles require you to enter from certain doors to complete, and thus if you are unable to think of a way to complete it, you might find yourself coming back to the room later on to finish that puzzle.

The tutorial while being fairly simple, did show all the features of the game though not all the creatures and blocks, for which you will need to discover their secrets. Most of them are fairly obvious in terms of what they do, but finding all the ways to utilize them may take a while to find.

Some final notes regarding the areas and the last few coins:

Besides the 5 normal areas, there are a number of other areas. The first one you'll encounter is the credits after you defeat the boss of area 5.
From there, there is also a passage to a warp zone in which you can revisit the previous areas. Note that you still must find a door to the warp zone to return to this area and that you cannot just warp from any area.
There is another area hidden somewhere in which it will require to first get a new ability that requires acquiring all but the last coin (which can be found in this area) then find the secret passage way to it. Hint: there are two "shortcuts" found within the normal areas

in which you would normally be unable to enter... Though they are labeled as just a shortcut, they led to new locations.
So after you acquired all the coins, what else could be left?

Never mind. Got it.

It's on the shortcut from level 2 to level 4. You need to get the first 24 to access it, though.

Loving it though I hasn't pass the place where you need to use all stone bricks to pass spikes and use a bird to pull the bomb switch. It just easy to slip to death! So, I hasn't even get half of the coins.

A couple things I'd like to add to the review: one is that a 3rd-party custom level pack was released simultaneously with the game, and can be downloaded from the official FiNCK page. (This works only if your game is already upgraded to support custom levels.)

Another thing, and this comes as no surprise to players of previous Nifflas games, is the number of easter eggs hidden in FiNCK. Can you find them all? ;-)

I love the concept of this game, but is there any way to change the controls? I'd rather have down be pick up and drop, and A be for throwing.

I like Nifflas games a lot, but these controls are just crazy :/

I do not have the tolerance for puzzle games that are undone by platforming. After a half hour working on one room, even when I knew just what to do, I gave up when I couldn't throw a block far enough--twice.

I guess I'm asking for a quick-save feature, or something.

My copy is buggy. I downloaded the Windows installer and it worked fine when I booted it up last night. This morning I load it up and my save game has me appearing in the right place, but instantly dying. Rinse, lather, and repeat. An empty slot does the same.

Definitely not working. I've uninstalled the game, erased the save file from my "Documents And Settings" folder and re-installed, and I still start any level by instantly dying.

That's a real shame, as Niffla's work is usually superb.

Everytime I try to start up the game, it won't let me and says "custom level support is not active", but I only want to play the normal levels

Loved the game! Took me quite a while to finish it, because I got frustrated on certain puzzles. I just couldn't figure them out! I finally finished though, and without cheating in the least (yay me!)

Did anyone else find the crayon level?

How about the two cheats?