There have been a lot of free-to-play games put out for big franchises, and to be frank, most of them tend to be muddled messes of shallow gameplay, timers, and in-app purchases, so I was a little concerned and skeptical about FINAL FANTASY Record Keeper, free for iOS and Android by DENA Games and Square Enix. In it, you play a young scribe who learns all of the records of the great heroes from the iconic Final Fantasy series are vanishing, being devoured by a strange darkness, and you're tasked with restoring them by your Moogle professor... a task which naturally involves going inside paintings representing battles from all of the classic games and stories, and recruiting a roster of all the characters you know and love along the way. Make no mistake, FINAL FANTASY Record Keeper is solely a turn-based RPG focused entirely on combat and party management, and the inclusion of timers and randomized loot that makes crafting slow going may give you pause. Despite this, it's a surprisingly satisfying little game with tons of fan-service and sufficiently strategic combat that's worth checking out... perhaps doubly so if you're the sort of person for whom party micromanagement is a great time. 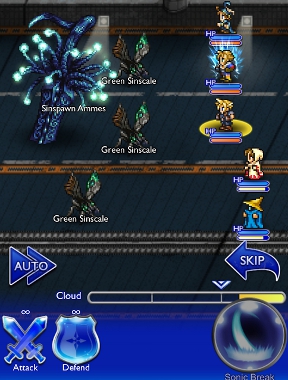 Each game from the series has a room devoted to it, with paintings that unlock as you progress. Each painting represents a certain point in the game it's from, with multiple fights to play consisting of several rounds apiece. Playing a battle costs stamina, which regenerates at a rate of one every few minutes, and while inside a particular painting you're "locked in" until it's finished, so if you retreat your progress will be reset, and any damage and so forth characters may have taken carries on between battles until you leave. Combat in Record Keeper is fairly standard for classic Final Fantasy games, meaning that while it's turn-based, characters have to wait for a bar to fill before they can take an action. Each character can attack and defend, as well as use a special ability when their bar is full, but if you collect enough orbs you can unlock new spells, abilities, and summons to equip your characters with... these can only be used a few times per battle, but they're essential for exploiting enemy weaknesses, and of course healing or otherwise helping your party!

The interesting things about Record Keeper is how much it rewards fan knowledge. All of the enemies you'll encounter will keep their abilities, defenses, and weaknesses from the original game, so if you already know not to attack when, say, a specific boss takes on a particular stance, you're golden. Likewise, characters and their corresponding equipment gain bonuses from fighting in their respective games... take Cloud on a VII mission, for instance, and he'll be significantly stronger for battles, and gain more rewards from them. In all honesty, the only significant challenge the game ever offers comes from its boss battles, but they can be absolutely punishing if you aren't prepared. Which, by the way, requires a lot of micromanagement as you manage equipment and abilties for each character, all nested within menus within menus within menus. 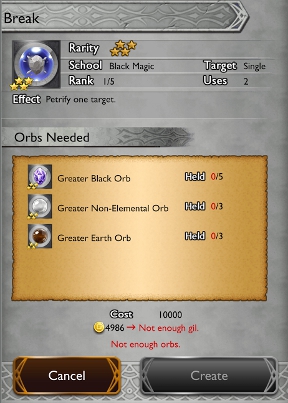 At this point, timers are par for the course in free-to-play games, as are multiple types of currency, of which Record Keeper has several. There's the crafting components, such as orbs needed for spells, there's gil which is spent for crafting and upgrading, and finally there's mithral. You get mithral both for logging for a set number of days, and for completing dungeons for the first time, and it's used to get random rare equipment (relics) for your party. If you're impatient, you can buy Gems with real money, which work the same as mithral, but at one hundred gems per US dollar, with a minimum of three hundred needed to get a relic, you're paying three dollars for a chance at superior equipment, so caveat emptor. (It's not quite Quark levels of greed, but I may detect Yuffie's hand in that pricing model.) This, combined with the micromanagement, makes FINAL FANTASY Record Keeper an extremely grindy little game, so players hoping for more of the stories and characters they love from the series will likely be disappointed to see it all reduced to simple stats and footnotes.

On the other hand, FINAL FANTASY Record Keeper still manages to offer a surprisingly engaging experience when it comes to its combat, requiring you to think about how best to outfit your party and who to take with you, though discovering too late that a perfect score on a dungeon was dependent on you beating a boss within specific parameters is a little frustrating. The old-school sprites are gorgeous, and while I say that as a creaky nostalgic who thinks graphics peaked on the SNES, the level of detail gone into creating characters and enemies from more modern games is fantastic, especially with the backdrop of the series' classic soundtracks for each dungeon. Whether this can help stave off the inevitable feeling of repetition largely comes down to you, and how much enjoyment you get out of unlocking new party members and revisiting classic battles. FINAL FANTASY Record Keeper avoids a lot of the pitfalls of typical free-to-play games, and while the ride isn't as smooth as it could be, it delivers a beautiful, well crafted nostalgic experience that spans the length of one of the most beloved RPG series of all time.