The Tantalus Theater Troupe aren't your ordinary actors... on the eve of a great celebration, they plan to use their performance at the castle to kidnap Princess Garnet. It just turns out, the Princess wants to be kidnapped, and that sounds just fine to brassy, self-confident Zidane, who's smitten at first sight. But this isn't an ordinary fairytale about a princess who's bored with royalty and wants to see the world... Princess Garnet is out to save it, even if it means defying the woman her mother, Queen Brahe, has become. Classic RPG adventuring from Square-Enix makes a return in Final Fantasy IX, available both for iOS and Android, and Windows through Steam to boot. With a very "old school" design compared to its grittier predecessors, Final Fantasy IX weaves storybook visuals and powerful themes of identity and self-worth for a captivating experience that makes the leap to modern devices with surprising grace. 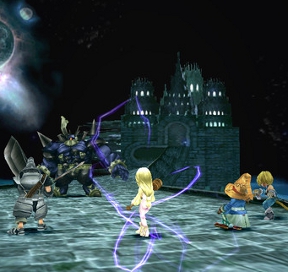 Final Fantasy IX is a classic JRPG that operates on the Active Time Battle system... combat (which, yes, is primarily made of ye olde random encounters-e) is turn-based, but you have to wait for your characters' gauges to fill before they can act, and unless you change it in the settings, enemies can still whallop you while you're pondering what action to take. While characters level up in the traditional way by earning experience, they can also learn new skills by equipping various items, whose abilities can be learnt permanently after enough time and battles. In its modern incarnation, Final Fantasy IX comes with a few optional gameplay tweaks beyond the ability to remap the keyboard or click-to-move. You can choose to max out your party's level or abilities, turn off random encounters, flood your pockets with gil, and so forth. These "cheats" aren't going to be for everyone, of course, but if you just want to experience the story without all the grinding, say, because you're an adult with taxes and responsibilities now instead of a pre-teen playing this in her jammies with a bowl of Fruit Loops, it's there to help if needed.

When I saw that Final Fantasy IX had finally been re-released, I took it as an excuse to replay it for review. I grew up with the series, even if I've petered out somewhat after Final Fantasy X, but even though I remembered playing Final Fantasy IX and getting fairly far into it, I didn't actually remember anything about it. Coming on the heels of the comparatively futuristic and high-tech feel of Final Fantasy VIII, IX's tottering animal folk, cuddly mages, and squeezable characters in their intricate storybook environments was a bit of a shock. Final Fantasy IX's strength lies in its ability to convey some surprisingly powerful and mature themes not just in spite of its design, but in part because of it. Its characters feel genuine, chasing their own dreams and fighting their own fears, in a way that grounds IX like few others in the series. Vivi's quest for identity and a place in the world, Steiner's battle with his sense of duty versus his own compassion and search for the truth, these characters and more are powerfully relatable... and of course it doesn't hurt that their adventures take them to some pretty amazing places in grand Final Fantasy fashion. Its over-the-top stylization might be a bit much for players who prefer their heroes more brooding and their settings places that can be described as "the rotting pizza" by the soundtrack. But Final Fantasy IX manages to be every bit as exciting and engaging as its less colourful brethren, even if its leading man trades having a permanent scowl for one of the most punchable smirks around. 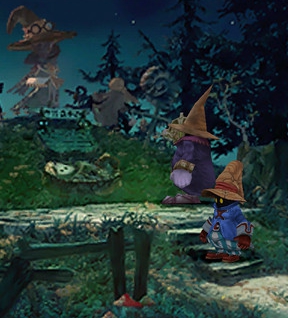 This new version looks a lot better on modern screens than the PSOne Classic version still available on the Playstation Network, making the characters and the locations they visit render smoothly so you can better see all the detail put into them. Square-Enix has taken heat in the past for some of its re-releases of its most popular classics feeling hastily put together or shoddy, and thankfully that's not the case here. Final Fantasy IX doesn't really have a whole lot of extra bells and whistles, but it doesn't really need them, either. It'll feel as welcoming and engaging to fans looking to re-experience it as it will newcomers who want to find out what happened to that kid's sleeves and why he has a tail. (No, his power level isn't OVER NINE THOUSAAAAAAAAAND, sorry.)

I also love the theme song of FFIX which is called Melodies Of Life :)